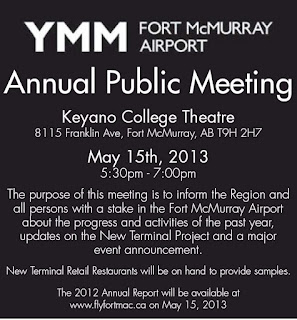 I felt like I was on another planet on Monday, catching my return flight to Fort McMurray at EIA (Edmonton International Airport).  Gate 72 said the boarding pass.  Every instinct in my body said to turn right at the confluence right after going through security.  But Gate 72 didn't live to the right, it was somewhere down an unfamiliar shiny hallway that I had never seen before. 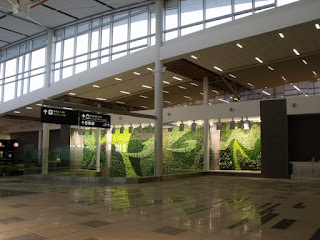 I walked past new shops, restaurants and a "living wall" that knocked my socks off.  The floor was pristine, complete with elegant and ever-so-slippery-looking mirror tiles.  The furniture was avant-garde, strangely comfortable, eerily unfamiliar.

In some ways, I felt like I was in an airport Nirvana, a perfect place, bright, clean, futuristic and spotless. 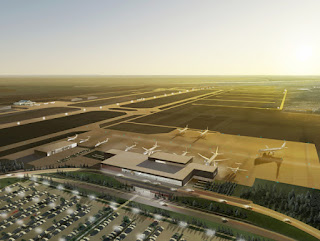 I'm not sure if our new YMM terminal is going to have the same effect, though I fully anticipate a WOW moment seeing it for the first time.  Our friends at the Fort McMurray Airport Authority are rolling into Keyano Theatre next week for their Annual Public Meeting (APM), and they're pulling out all the stops to make it a can't miss affair.

Our current terminal, built for 250,000 passenger movements a year in 1986 - thought ostentatious and unnecessary at the time - now handles almost 1 million passengers annually.  Growth in 2012 was 25%, far beyond that of any other airport in the country.  In the first three months of 2013, passengers counts were trending toward 27%.

"Our growth puts us in a completely different category than anyone else," said Scott Clements, CEO, Fort McMurray Airport Authority during a presentation at a recent Chamber of Commerce luncheon.

You'll undoubtedly hear the startling growth figures and comparisons at the APM on Wednesday, May 15 from 5:30 to 7:00 pm, along with exciting plans of how they will celebrate the new terminal's opening in 2014 including a major airshow.

How "major" is major?

"This is shaping up to be the best airshow this province has ever seen," said Clements.  He mentioned both the Snowbirds and the Hornets.

There is also some exciting news coming regarding the announcement of the retail and food/beverage operators who have signed on for the new facility.

"There are 18 new retail operations and the best Starbucks in any airport in the world in the new #ymm airport," tweeted Ken Chapman (@KenChapman46) during the Chamber luncheon.

Don't worry about the event cutting into your dinner hour because according to Jesse Meyer, Manager of Marketing and Communications, samples will be served up by the incoming food and beverage operators.  So, come with an appetite and a thirst.

Lastly, you'll get a chance to see how public art is going to factor into this world class facility.  A number of artist - local, regional, and national - have been commissioned to create a number of pieces. Gabriel Wong of Edmonton will design a terrazzo medallion that will be incorporated into the floor of the main hall, at a central orientation point for both arriving and departing passengers.  David Robinson of Vancouver will create a sculpture that will be suspended in the hold room in the north end of the terminal.  Liz Ingram of Edmonton will create an image that will be incorporated into a glass partition wall at the south end of the hold rooms. And my friend Lucas Seaward of Fort McMurray will create original artwork for the walls of the airport's board room and public observation area.  All these works will be created and installed in time for the opening in late spring 2014. 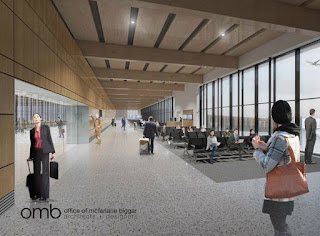 There are so many reason to attend this meeting and begin to imagine how our experience of flying out of, and in to, Fort McMurray will vastly change one year from now.