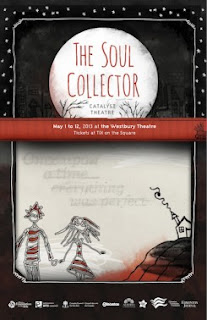 Sitting in the Westbury Theatre - an apparent twin of the Suncor Energy Centre for the Performing Arts in Fort McMurray - watching Cataylst Theatre's latest other-worldly creation, I kept thinking how a certain crowd back in Fort McMurray would eat this up.

Starting the moment you walk into the theatre lobby, you get the sense of the style for which this company that focuses on 100% on made-in-Edmonton work has become widely known.  Crepe paper billows along one whole wall, foreshadowing the "snowstorms of the century" to come.  A photo booth off to the side, gives you a chance to try on some Catalyst garb, funky hats, coats, glasses and beards to grab a snap or two before seeing the show. 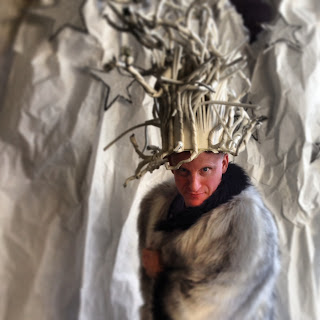 The team of Jonathan Christenson and Bretta Gerecke has established a form that, based on what I've seen - Frankenstein, Nevermore, Hunchback - always includes a narrator, original music and lyrics, Tim Burton-esque scenography, hand-made and sculpted costumes and a subject that is dark, though often, if not always, with a romantic undercurrent.  The Soul Collector hit all those marks, and then some, but contained brilliant nuances and a fascinating setting created in a transformed black box space, two-sided arena style, with the audience on either side of a road lined with spindly paper-wrapped trees that reached to the tensile grid up above.

I won't give too much away because this is a journey worth taking with scant knowledge of what is to come. The Soul Collector flirts with that moment when life changes on a dime: in one minute things are one way, in the next, they are completely different.  Has that every happened to you?  If you could take it back, would you?  Did you make the right choice after everything had changed?

Clinton Carew is blind and top-hatted Mortimer, the ever-present narrator of the story whose crisp, sonorous voice, keeps moving us along to a riveting finish.  Karyn Mott is Memory McQuaid, the subject of the story, trying to find her way back to that moment in order to figure out what needs to happen next.  Benjamin Wardle is Gideon Glumb, connected to Memory, through love, but what else?

From Popcorn Pete (Garett Ross) to Agnieska Bjarneson (Allison Lynch) to Thorvald Jespersen (Eric Wigston), the characters that pepper The Soul Collector embed themselves and don't let go.  Even now, sitting here the morning after, flashes keep appearing in my mind, fragments that repeated themselves to weave together a story that hit me like a runaway truck in the dying moments of the show.

To be honest, as The Soul Collector began - exactly 100 minutes before it ended - I had a moment of fickle uncertainty. Was I ready and willing to let a new set of characters wash over me, in what was obviously going to be in the same style that I had seen in the three previous productions?  True to the Catalyst form, they hit us with an opening narration followed by full guns a'blazing, before working back, deconstructing the story and weaving it all back together.  Very quickly, I was captivated, drawn in beyond measure, an observing interloper of strange circumstance in the town of Cold Comfort, a place that seemed out-of-this-world, while at the same time all too familiar.

"That icy specter", The Soul Collector is a made-in-Alberta production from Catalyst Theatre that deserves to be seen and celebrated.  It has this lingering after-effect that makes me want to go back and see it a second and third time.

The cast and crew are enjoying a well-deserved day off, but there are still a few chances to see this run of The Soul Collector at the Westbury Theatre (10330 84 Ave).

For more information on Catalyst Theatre and how to buy tickets to The Soul Collector, visit their website at www.catalysttheatre.ca.