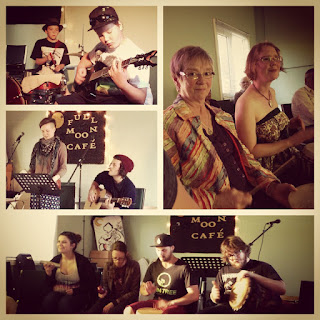 It often lands in my schedule, once a month on Saturday nights, but something always seemed to get in the way.  That changed last night as the stars aligned and a car load of us dropped in for a couple of hours of drumming, songs and stories offered up by the Full Moon Café within the intimate walls of the Waterways Community Centre. 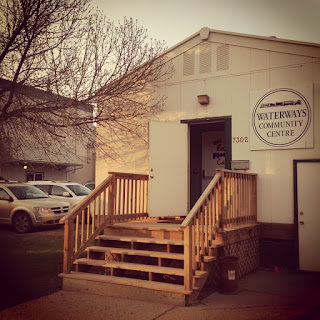 We heard the alluring sound of the drum circle the moment we arrived at the facility, escaping out through the open door and windows.  Chairs set-up in a circle invited us to grab a shaker, drum or knocker and join in.  For the next 30 minutes we explored the beat, and the spaces between the beats, creating a wonderful energy and sound. 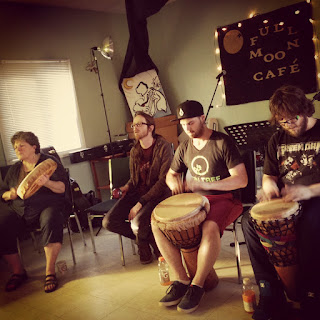 "May all the tribes of the world unite and beat with the rhythm of one heart," offered Hope Moffatt (above photo to the left), one of the passionate purveyors of the Full Moon Café, to bring the circle to a close.

A wonderful mix of adults and kids, Canadians and new Canadians, the Full Moon Café is decidedly intimate, chairs lined up close together facing a small performance area framed by a painting, a bolt of blue fabric and a small banner on the back wall lined with a string of lights.  The glow of sunset coming in through the fabric-covered windows, mixed with a light cooling breeze, made the setting almost mystical. 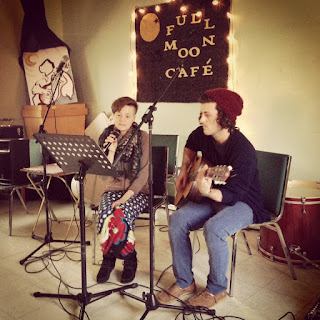 The first performers were Lily Hall and Francis Mennigke, otherwise known as Chesco and Marie.  I has heard Lily earlier in the day, belting out a beautiful version of our national anthem at the 47th annual Keyano College Convocation.  But the effect of singing alongside Francis - one of our community's great artistic imports, originally from South Africa: a musician, playwright and performer - elevates her unique voice and compelling style to a whole new place.  The chemistry and camaraderie between the two is undeniable and they entranced the full house of 30+ people packed into the tiny hall with a couple of songs and a few spoken word pieces including Mennigke's "Philosophia". 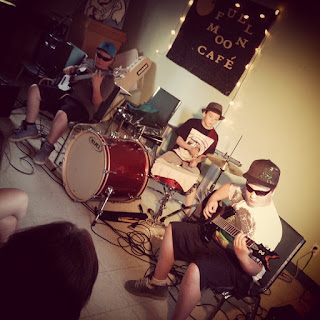 The Bad Boys of Beaconhill were next, three 10-year-olds who delivered two rockin' tunes including a Green Day classic.  Solange Maher - Mom to one of the boys, and one of the founders of the Full Moon Café - soon to celebrate its 9th anniversary - gave them the big introduction as they filled the space, earning hoots, hollers and much applause. 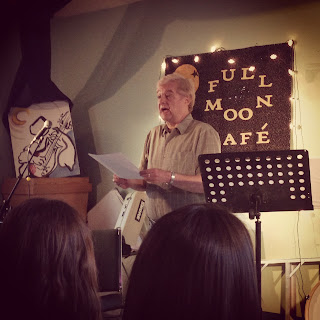 Jock Howard, a familiar and influential face on the cultural scene, delivered a couple of readings, one a selection from the Chicken Soup for the Soul series, another a World War Two-era poem by John Gillespie Magee, Jr. called "High Flight.  With his sonorous, inviting voice, Jock reminded me of the power of the spoken word and its ability to captivate an audience.

We ducked out and home at this point, ready to call it a night after what had been a pretty remarkable week.

"I can't believe that neither Russell or I have ever been to this," shared Heather with her parents, Neil and Susan, who had joined us (from the Crowsnest Pass) along with Ben for the evening of music and story.

I can't remember exactly what she said next, but it was effusive appreciation for the event, the space, the people, and the authentic grassroots quality that makes the Full Moon Café something worth supporting and attending.  We'll be back, maybe with a talent in hand the next time around.
Email Post