I had been asked by Leadership Wood Buffalo alum Vilia Tosio to say a few words at a breast-feeding support group gathering in Timberlea. I was happy to oblige, though a little uncertain as to what I could possibly say that would add value to the discussion. This request had happened months ago, the event arrived yesterday.

There were three resonant thoughts that jumped into my mind as I sat here 24-hours ago piecing words together. Rather than attempt to regurgitate exactly what I said, I will share the speech and let the words  i wrote speak for themselves.

The meeting was set for the community centre at Millenium Gate, a large and friendly space, teeming with moms, infants and tots. One particularly friendly toddler kept extending his arms in my direction, so at various times throughout my visit, I would scoop him up for a few minutes until he was ready to go walk around some more - there was no shyness on anyone's part about stealing a few minutes of baby time.

I was rocking back and forth with a wee little one when Vilia introduced me, the only non-infant, non-toddler male in the space. These were my notes, and even though what came out of my mouth might have varied slightly, the storyline and themes remained intact.

Back in November, President Obama was speaking at a high school. A mother with her 10-week old son was in the front row. Knowing the place was going to be packed, she had brought 8 oz of formula. But as the event stretched into the fourth hour, she was out of food and the baby was becoming more and more hungry.

As the President began to speak, she thought to herself, to hell with it, grabbed a blanket, covered up the baby and let him go to town, right there in the front row.  She noticed the President glance at her while speaking, giving her a little knowing smile.

When he was done, he came down to do the usual handshakes with the crowd.  As he neared the lady, he pointed and gestured with his hands..."Give me the baby!"  She handed the little guy over and delighted as President Obama did a little dance and kissed him on the forehead.

As he was handing him back Obama smiled, nodded at the mother, and said "Good job!"

What a powerful statement from the most powerful man in the world. 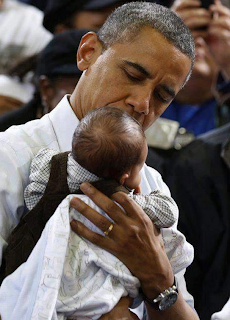 We know the reality is that over the last 50 years, the number of mothers breast-feeding has been in decline.  This fundamental shift in motherhood culture, at least in the Western world, has happened incrementally and consistently.  Why?

"Marketing," said Vilia when I asked her the question.  The companies that make formula have done a brilliant job of selling their product.

What you are doing in this group is vital to the hopes of turning this ship around.

I would guess that even for mothers who have it in their heads that they want to breast feed there is a tipping point.  There certainly was for my wife Heather, as her level of frustration, anxiety and exhaustion reached its apex when Ben just wouldn't latch on.  She was losing her mind!

How many here have had a similar experience?  (about 10 hands shot up in the air)

If she didn't get the advice, support and encouragement at that exact moment, Ben would have joined the growing legions of formula-fed infants.

STORIES ARE THE STEM

But if the benefits of breast-feeding are the flower, its colour, fragrance, richness and beauty, then the stories are the stem and roots.

How can I, as a member of the male species, possibly understand the magic and import of this very personal connection point when I will never have the benefit of the experience?  Through your stories, your vulnerabilities, your willingness to share that inexplicable something that occurs with your baby during those infant years - through your words, your eyes, your expressions, your body language - we can begin to understand. And expecting mothers can begin to consider this healthy alternative in greater and greater numbers.

Authentic stories told consistently over time with a common theme and purpose, can and DO affect a culture.  Keep sharing, talking, expressing, educating, challenging.  Over the course of many years and generations of mothers, breast-feeding will make its way back into the cultural mainstream where it belongs.

The incredible story about the breast-feeding mother, her 10-week old son, and President Obama was shared on Facebook and very quickly made its way around the world.  If there is one thing I've learned about the power of social media, it is that you don't need to be the President of the United States to make a difference, to find an audience.  A compelling story, honestly told, has the ability to penetrate minds and hearts across the globe faster and more comprehensively than at any other time in human history.

Thank you for inviting me to say a few words today.  I hope that you will continue to tell your stories about why breast-feeding is important, how it's added value to your life, and the life of your little one.

You might wonder how we doing in Alberta?  Here is a link to some stats that will help paint that picture: Statistics about breast-feeding in Alberta.  The gold standard, in terms of breast-feeding penetration rates, according to Vilia, are some of the Scandinavian countries where as many as 99% of mothers choose to go the natural route.