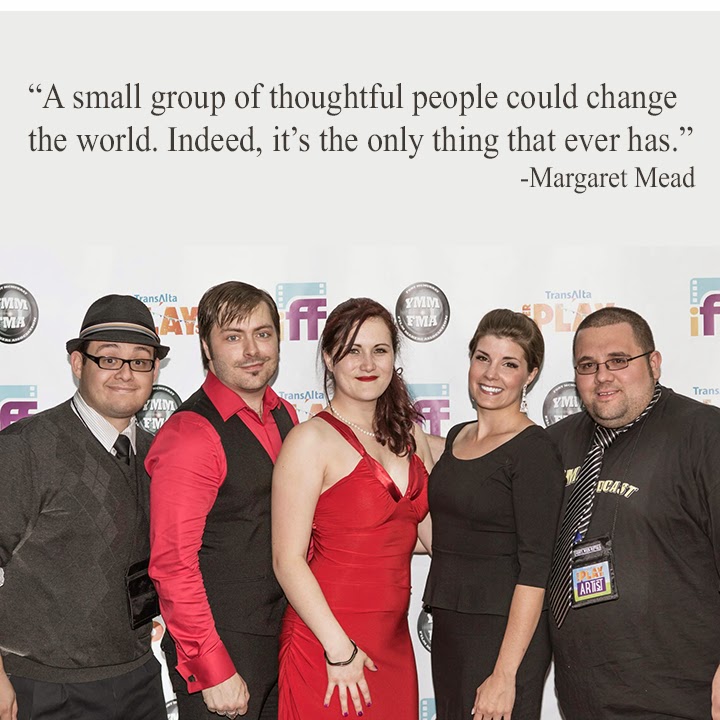 I still can't get over the fact that the Fort McMurray Filmmakers Association (YMMFMA) has only been in existence for a year.  They celebrated the occasion over cupcakes and homegrown films on Thursday night with a full house of people, lots of socializing and laughs. 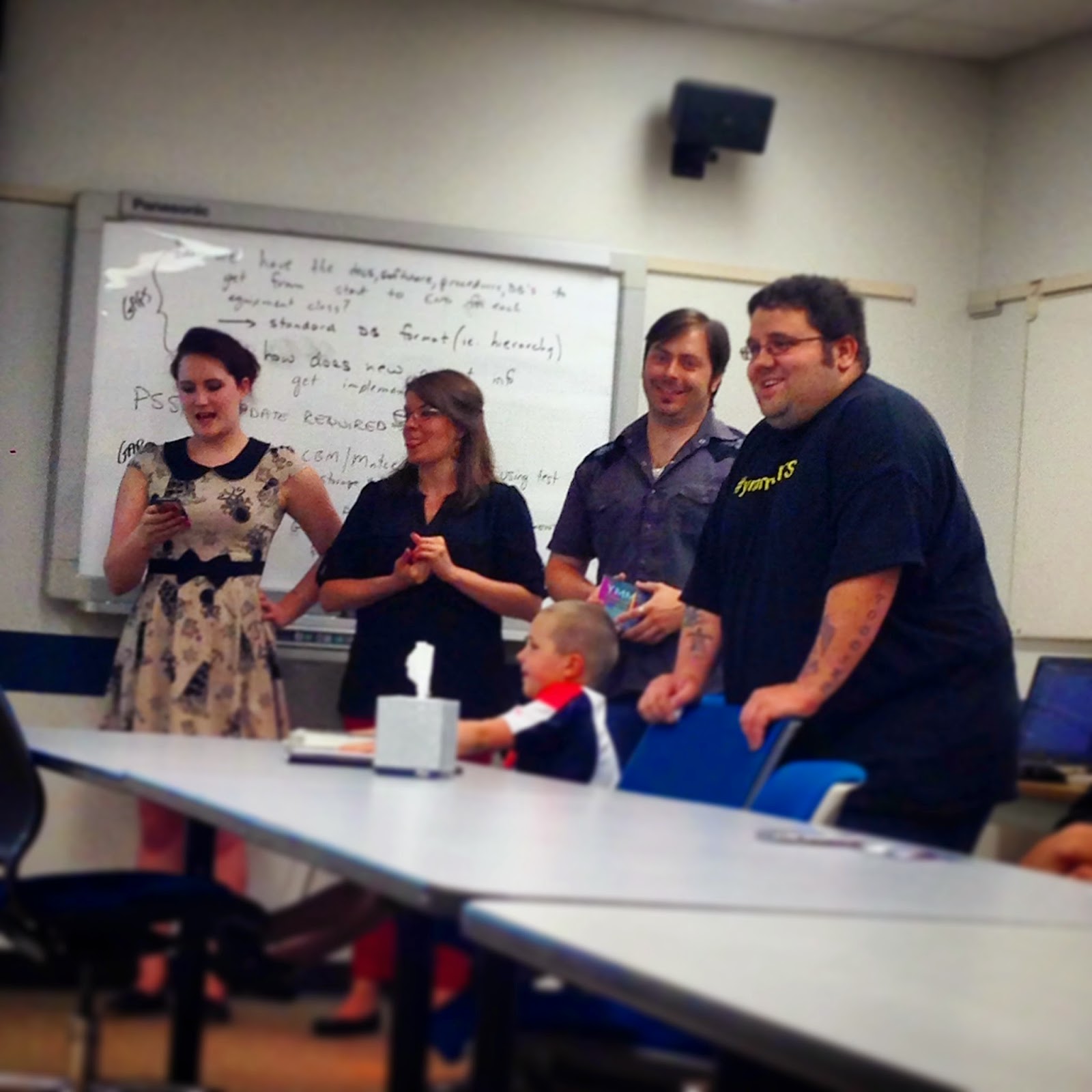 Founded by the fearsome fivesome: Tito Guillen, Steve Reeve, Ashley Laurenson, Misty Oakes, and Toddske, the YMMFMA has become equally influential as connective.  They have produced film festivals, film challenges, workshops, and myriad other opportunities that have brought together familiar faces and those not-so-familiar, creative forces who live in our community or who have landed here with skills, experience and desire. 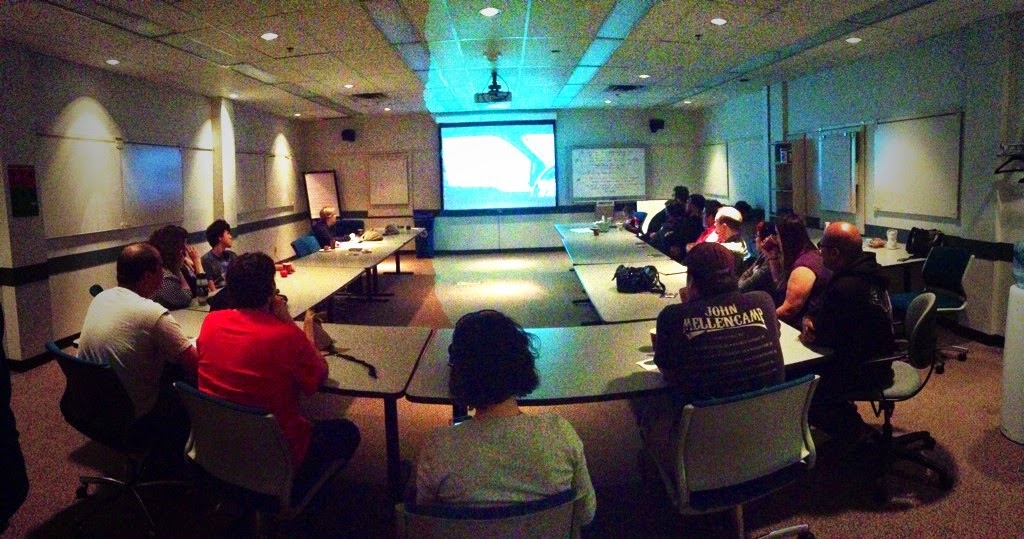 I nominated them for an award earlier this year, a distinction that acknowledges and celebrates community impact.  I'd like to share those words here for two reasons: 1) the gang from the YMMFMA deserve to read them (and there is no better occasion than on their anniversary), and 2) they are shining example of what is possible when a small group of people come together with an idea.  Perhaps other will be inspired by what they have achieved in a relatively short period of time and try something of their own.

We did an exercise as part of the rehearsal process for Les Mis, where we had to reflect on a kindness that was done to us that was a game changer. Dylan, my 14-year-old son, who has been an inspiration to so many for the way that he has overcome adversities associated with living with cerebral palsy, wrote down six letters on his little slip of yellow paper: YMMFMA, the social media handle for the Fort McMurray Filmmakers Association.

The impact that this group of creative people has had on Dylan, and many others, has been profound. Formed in 2012 and officially incorporated in 2013, the Fort McMurray Filmmakers Association has been nurturing and growing a community of artists of all ages and backgrounds who learn, create and celebrate together.

I attended one of their first meetings and was blown away by the diversity in the room, both in terms of ages and levels of experience. Seasoned filmmakers were engaging with young people with little to no experience, in an atmosphere free of judgment and abundant in generosity.

Whether it is producing the 48-hour film challenge during interPLAY, hosting workshops, or partnering with Keyano Theatre Company on a number of different capacity building initiatives, this group has jumped into a suite of activities that have stressed participation, accessibility, collaboration and creativity.

When the HIV North Society approached me for some marketing advice about a campaign they wanted to develop to raise awareness of Sexually Transmitted Infection (STI) prevention in the oil sands region, I instantly suggested working with the Fort McMurray Filmmakers Association. Arts Council Wood Buffalo convened a two-hour creative think tank with members of YMMFMA, Krista Balsom from Balsom Communications, and Brenda Yamkowy from HIV North Society which resulted in the #sexatsite campaign which is currently underway.

The campaign engaged the growing community of filmmakers in writing short video public service announcements, four of which were selected for production. While the YMMFMA took the lead on coordinating the filming, they used it as a development opportunity, giving aspiring filmmakers and actors the chance to work on the project, learn valuable skills and gain experience. The resulting videos are being released throughout the months of January and February 2014 and are attracting thousands of viewers, raising awareness about taking appropriate personal protective measures when engaging in sexual activity.

I have seen the YMMFMA’s ability to take projects from the conceptual stage through to the finished product, always with the intention of bringing creative minds together in a spirit of collaboration, inclusiveness and curiosity as to explore what is possible. Responsive, resilient, inventive, and determined, this organization has done more in two years of operation than many organizations do in a decade. The passion demonstrated by the board of YMMFMA has resulted in the creation of a dynamic filmmaking community and an incredibly bright future for this arts discipline in Wood Buffalo.

Congratulations to the YMMFMA on one incredible year and best wishes for many more to come.
Email Post