Cutting the ribbon on Shell Place 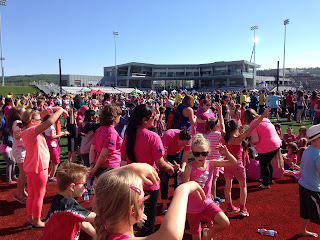 Our United Way team joined thousands of others on the baseball field at Shell Place yesterday to officially cut the ribbon on this outstanding facility.  We were making a Guinness World Record attempt at having the most participants doing this particular activity. 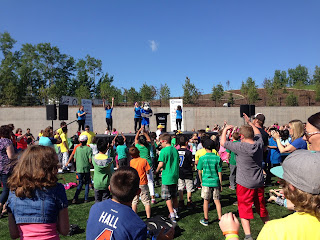 Both school districts had bussed in thousands of students, but there were also lots and lots of community members.  There was a buzz in the air and most of us were taking this world record thing rather seriously.

The ribbon wound its way around the ball field, so much larger than I imagined.  How someone would ever hit a ball over that concrete centre field wall, I have no idea. 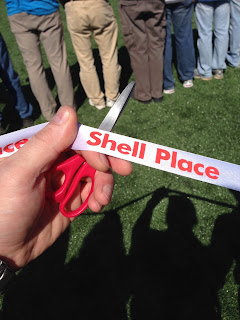 We were told to stand in our spots, scissors in hand, and wait for the 3-2-1 countdown from Peter Zebedee from Shell Albian Sands.  Half my brain was worrying about somebody snipping too early and ruining our chances while the other half was concerned that someone would whip out their iPhone and take a picture at the moment of cutting - we had been told that was against the rules.

I got to meet Michael, the Guiness guy, when I walked into work that morning.  He seemed like a nice fella, from Astoria, New York.  I'm guessing his role that morning was to brief the Shell volunteers, who ended up serving as official marshalls and counters, and to be the official witness to the attempt.

My back was getting sore standing on the artificial turf for the better part of an hour, so I was glad when the countdown finally happened and over 2,000 of us cut the ribbon in unison.  I thought it was pretty cool that my neighbour, a complete stranger, bent down to pick up my little section of ribbon to make sure I didn't leave my piece of history behind. 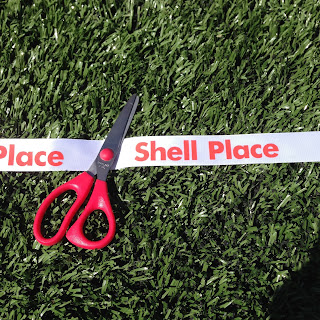 We didn't break the record; we didn't even come close.  But, it didn't matter a bit.  It was a wonderful experience, with energy that was electric.

"You voted for this," someone reminded me later in the day.  I guess I did.
Email Post