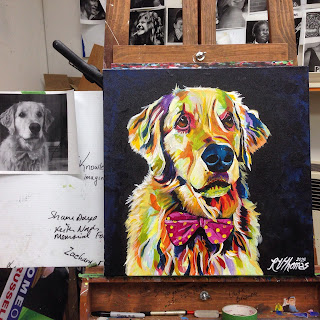 I had hit a creative wall after completing the 4-foot long portrait of The Jackson 5.  I knew that I needed a brief break from the Motown series and that Maryanne had a date that was looming for presenting the portrait she wanted done of Finnigan, so I spent some time sketching him out.  I honestly didn't know where I was going to go next. 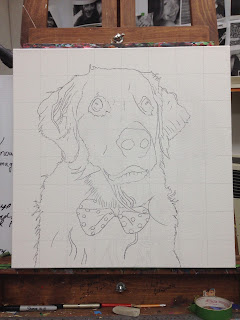 It was that evening that I came across the outstanding work of Eric Staub from Louisville, Kentucky (who would be pleased to take commissions to paint your pets as well).  It was like his artistic voice/style reached into my brain and unscrambled things.  Let me explain. 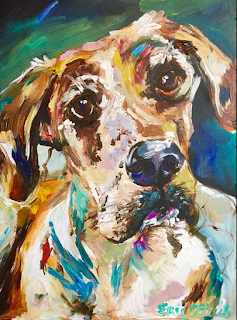 I had painted a few animals in the year that I've spent on this painting journey, however, I always felt inclined to capture their actual colouring, as if giving them new colours was beyond the realm of what was appropriate.  One glance at Eric's work - followed by several more glances - provided the enlightenment that I needed to approach the work of capturing character in animals in the same way that I do people.  It was a slight shift in thought, but one that was freeing in a way that was rather intoxicating.  I was vibrating by the time I was finishing the painting, listening to the soundtrack to ROCKY - my other motivational go-to along with Meatloaf's Bat Out of Hell. 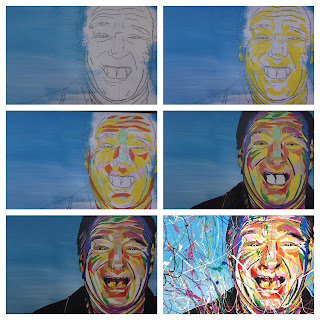 I felt a similar explosion when I painted Robin Williams the day he died.  The colours, the strokes, the background, poured out of me, almost effortlessly.  As I neared the end, I knew that something special had emerged from the canvas.

The response to Finnigan has been remarkable and the requests have flooded in to do other dogs, cats and various other friends and family.  I'm so grateful for the kind comments and the interest.

"Do you take requests?" and "How much do you charge for your paintings?" are two questions that often get asked after I post a new work that catches peoples' attentions.

The truth is that I need to find a full day in my calendar to manage the dozens and dozens of commission requests that have come in.  People have been so patient with me and I can't thank them enough.  I paint on a very part-time basis in between my various contracts and working with the United Way.  I'll be kept inspired at the easel right through the summer and into the fall.

In terms of price, I like to have those conversations privately.  The best thing to do is LIKE my Russell Thomas Art Facebook Page and send me a direct message.  Be sure to participate in the contest that is going on right now.  I'll be doing a free 12" x 12" quick study this weekend for the winner of a draw that will happen tomorrow.  To enter, all you have to do is look through my photos of portraits and pick a favourite and share the reason why. 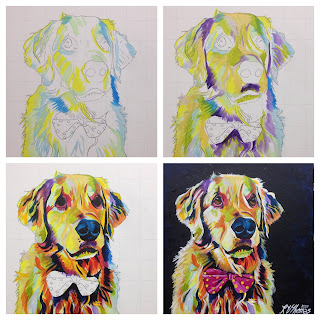 Painting Finnigan was the most fun I've had at the easel in a long, long time.  And considering how much fun I've had over the last year, that is really saying something.  My thanks to Maryanne for asking me to do it, and to everyone for your kind comments.  And thank you to Finnigan for being such a great subject. 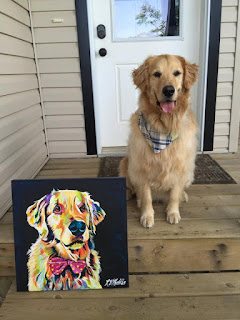