As a son of Saskatchewan I am a little embarrassed to say that up until yesterday I had never been to a football game.  Don't get me wrong; I have always been a roughriders fan. Even if I don't diligently follow their progress through the season, my ears perk up when anything about Rider Nation pops up on the television or radio.

I wasn't going to write about the Northern Kickoff, the CFL's northernmost game hosted at SMS Stadium at Shell Place in Fort McMurray, but I can't help myself.  It was an historic event, and a first for our family.  I don't want to chance leaving it to memory.

To be honest, I was a little stressed about the getting-to-the-Island part of the Northern Kickoff.  It had been closed to vehicular traffic, with only three methods of egress: taking the bus, grabbing a taxi, or walking on.  We decided to go with the bus. 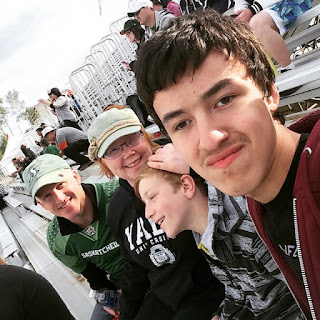 We walked the four blocks from our house to the downtown depot.  Just as we got there the MacDonald Island bus pulled up.  We were at the game within minutes.  We bypassed the party in the parking lot and went straight to our seats in the end zone.  Seven rows up from field level, we were dead centre with a great view of the field and the CNOOC Nexen stage designed by my friend Hideaki Taguchi from Kansas City. 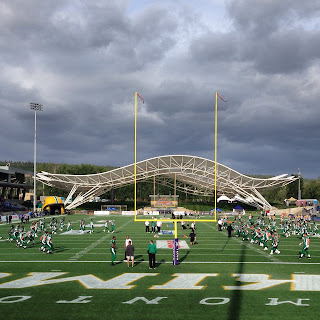 It was rather surreal sitting there watching the Saskatchewan Roughriders warm up right in front of us.  Just a few years earlier Shell Place was an empty field where we slapped together major events like the Northern Classic, KISS, and Rock Island concerts.  Now it is a fabulous stadium with two CFL teams warming up getting ready to christen it. 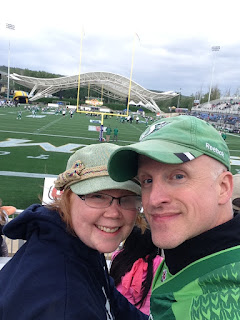 We were grateful for the close confines of life in the bleachers as the combination of the wind and the setting sun made it feel chilly.  More bodies streamed in the closer we got to game time at 8 pm.  Eventually, most of the stands looked full with only empty seats on the west end of the south bleachers and some above us in the family zone.  The announced attendance ended up being 11,825 - the largest single event in Fort McMurray history. 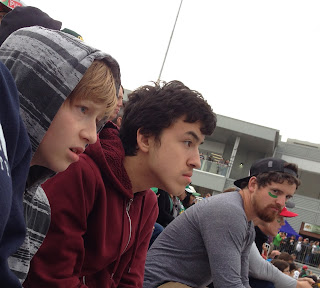 I enjoyed watching the stuff between the plays, the activity that you generally don't see on television when they're running commercials:  fan contests, giveaways, cheerleading demos, etc.  Several friends were featured including Gina Dobie who won a $500 gift card and Velda Peach who participated in a fun on-field contest sponsored by Subway. The "business" of a major sporting event is a fascinating (and complex) beast.  While I have nothing to compare it to, the Northern Kickoff seemed to go off without a hitch, save the one fan who decided to take a slight detour on to the field to get chased by an RCMP officer and eventually tackled by a couple of players.  There also appeared to be some bus woes later in the evening, based on some of the chatter on Twitter.

We happily ducked out early, caught a bus downtown, and made it home without a hitch.


I kept thinking of Tim Reid last night.  He has moved on to major things with Northlands in Edmonton, but he was integral to the vision of what transpired last night.  A shoutout to him and the entire Northern Kickoff team for pulling off one fantastic event.  You should feel very proud of having planned and executed a near flawless celebration and the northernmost CFL game in history.