As I have been on this painting journey, there has only been a smattering of not-so-positive feedback. People are less inclined to say negative things about the portraits but don't hesitate to take a run at the subject.  That's happened a couple of times.

I got my first real negative slam yesterday after completing the portraits of Michael Jackson and Diana Ross.  As these two paintings will be the first thing you see when you arrive in the Motown Delivery Lounge at the Northstar Ford Lincoln dealership at the bottom of Confederation Drive, I wanted them to have a similar look.  Diana was the first to be finished, so I kept her around in the studio (something I don't normally do - when paintings have been finished and photographed, they come into the house), while I started on Michael.

"This shit is ugly," began the tweet by @KolaBoof.  "I know this is your work and you see it different. But they look like Lepers. Horrible!"

At first I was a little taken aback.  Then I realized that I must be doing something right, as art is intended to inspire a reaction.

To be fair, I was feeling the same way about the Michael Jackson painting yesterday morning.  It wasn't coming together in the way that other paintings do.  It felt choppy and disconnected.

I kept going, adding colour, texture and lines to the 24" x 36" canvas.  By the time author David Bezmozgis arrived in the studio for a visit, Michael had begun to emerge and my discomfort had waned. 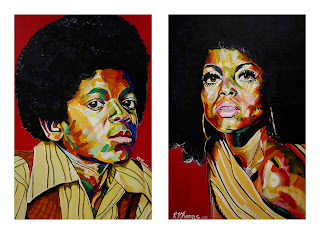 Art is highly subjective, and absolutely everyone is going to react differently to the creation that is in front of them.  As evidenced by the contest I held on my Facebook page, Russell Thomas Art, patterns emerge of the paintings that people like more than others.  The first Robin Williams is a perennial favourite, as are the murals of Elsie Yanik.  The recent dog painting of Finnigan seemed to hit the sweet spot as did the quick study of Jimi Hendrix.

The winner of the contest was Alana Patzwald from Saskatchewan.  She was selected in a computer-generated random draw to get a 12" x 12" quick study.  She chose her husband Jordan, a radio personality in Yorkton, Saskatchewan. 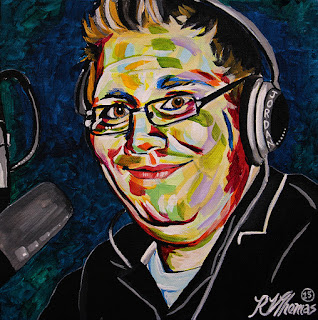 Apart from the one visceral reaction from @KolaBoof, responses to my portraits have been overwhelmingly positive.  I am grateful for all the kind words that have been shared by both friends and strangers, and I am oddly honoured by the stark honesty of @KolaBoof.  Maybe I'm heading in the right direction.
Email Post