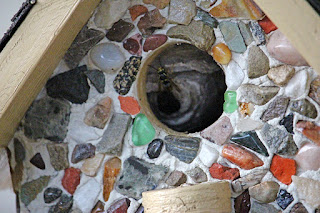 I don't know how I didn't notice it before.  The birdhouse made by Florence's mom (Florence is the owner of Points North Gallery) sits right next to the door of the studio.  Logic would suggest that at some point in the last few months I would have noticed some movement going in and out of the little hole; but I did not.  Today I saw that wasps had moved in and crafted quite a lovely nest, just inches from where I go in and out of the studio multiple times a day.

I grabbed a big basin and filled it with water.  My brilliant plan was to carefully remove the one screw holding the birdhouse on the wall and drop it, hole facing down, into the water.  Simple. They would all drown and life in the backyard would return to normal.

With a chair to stand on to reach the screw, I considered using a drill for a few seconds.  But, I thought the noise would rouse the wasps, so I instead opted for a regular handheld #6 Robertson. Nonchalantly, I reached up, grabbed the top of the birdhouse with my left hand and began turning with my right.  My attempt to not draw attention to what I was doing failed miserably.

Within a millisecond, there was a flurry of wasps getting all up in my stuff, and one deep drilling into my brain.

"Shit!" I screamed, bounding off the chair, slapping the pain on my scalp, and darting for the door of the house.

My head felt sincerely odd as the entry point throbbed.  I hadn't been stung in many long years, and I certainly had never been stung in the noggin before.  It hurt like heck.

There were two schools of thought shared on Facebook after I posted about the event.  One group feels that we had peacefully co-existed before; we could certainly do it again.  The other had more violent ideas about how to handle the squatters ranging for shotguns and fire to bleach and toxic pesticide.

I was on the fence for awhile, until I imagined someone getting stung.  I'll be dishing out some Raid when the sun goes down.
Email Post