I got the note on Thursday night from singer, songwriter and friend Stu Marchand that Ron Hynes had died earlier that day.  A wildly popular and revered singer-songwriter from Newfoundland, he succumbed to his second bout with cancer and left behind legions of fans and countless friends. 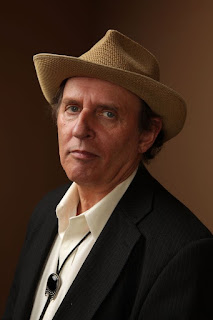 I went out to the studio as soon as I had a cup of coffee brewed and some Ron Hynes music downloaded, shortly after 7 am yesterday.  It was a great way to start the day and remember my small connection to this incredible artist. His album Cryer's Paradise (1994) was always around during the latter half of my decade long radio career. 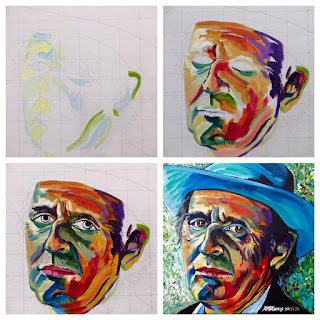 I began the painting in my usual fashion, by putting an under layer of light tones, then quickly filling with mid-tones and black highlights.


There is an unintended Van Gogh quality to the finished painting.  Something about that eventuality feels appropriate as Ron interpreted the world in songs that, like Van Gogh's paintings, were also brilliant masterpieces.

His passing hit a lot of people hard - I could feel it in the words as people responded to the portrait.  Nothing can ever replace the magic of the man, but his music will live on, and perhaps this painting will too.

If anyone reading this is interested in ordering a canvas print of this portrait, you can connect with me in a couple of different ways:

The cost for a print in the same size of the original is only $85, delivered directly to your door.
Email Post