Trust transference can change the world 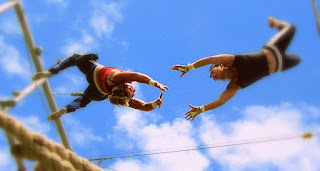 An interview that stuck with me from the CDs provided by SUCCESS magazine was one about trust transference.  This is very simply when you introduce someone you know to someone else you know, but the two people do not know each other.  "Hi Bob.  You need to meet Bill.  Bill is working on something that would be very interesting to you."

Because Bob trusts and respects me, those feelings get transferred to Bill in the simple act of making the introduction.

This is a powerful tool that can build value in your business, strengthen your community, and help others to reach their full potential by putting them together with the right people.

Trust transference is on my mind because it happened on two specific occasions yesterday.  I discovered that two close friends both had a direct and deeply personal connection to Ron Hynes, the masterful singer-songwriter from Newfoundland who died last week. One inspired the painting of Ron, the other bought it.  Both have lived in the community for years, but had no connection to each other.  Both are great individuals who have the community at heart and feel a deep sense of loss because of the passing of the "Man of a Thousand Songs".  I went over to Facebook and introduced them to each other.  The rest is up to them, but I can see one helluva a conversation over a coffee in the coming days.   I'd love to be a fly on the wall to hear the memories of Ron Hynes that will be shared.

Heather came out of the bathtub last night clutching Terry Fallis's latest novel, Poles Apart, to her chest.  She made a comment about how much the book was growing on her and how it was inspiring her to return to her writing.

She would have happily sent Terry a note herself, but I decided to open that door by introducing one to the other to start the connection.

Terry has grown to trust me through our long-distance mutual admiration society - I've been a huge fan of his writing since I discovered The Best Laid Plans; he's become a fan of my portraits (and an owner of one) - and in introducing my lovely wife, that trust instantly got transferred.

It begs the question of who are the people in your world that may not know each other but possibly should.  What are those yet-to-be-realized connections that would add value to each person, their organizations, our community, province and country?  That may sound a little lofty, but introductions that you facilitate can and will change our world; you may never realize the difference you can make by introducing Bob to Bill.