Listening to my body

Whether she knows it or not, Heather has rubbed off on me.  Over the last decade she has been on a continuous learning and spiritual journey.  One of the things she talks about a lot in her work is "listening to your body".  I think I listen to mine better because of her.

I was out in the studio two nights ago, getting a jump on the next project: a fine old gentleman who passed away a few days ago, when my body was telling me to put things away for the night and go in the house.  I listened and I did.

It had been a productive day - eight hours in the studio; I was physically tired.  I was also mentally tired and needed some distance from the paintings to re-charge and go on a nocturnal exploration of what needs to be next.  I do a surprising amount of painting in my half-sleep - that land between sleep and wake.

Example of listening:  I was in Spotify yesterday morning, finding something to listen to.  I landed on Tom Wait's album "Closing Time".  However, just to the right were a pair of eyes belonging to Mississippi John Hurt. 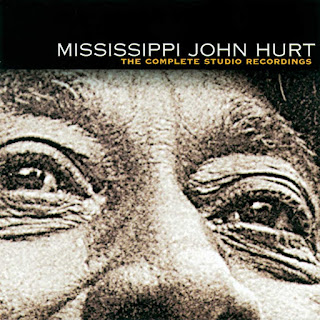 They drew me in and prompted me to do a Google search.  I found an image and ended up spending most of Sunday bring him out from the canvas for no other reason than my body was leading me there. 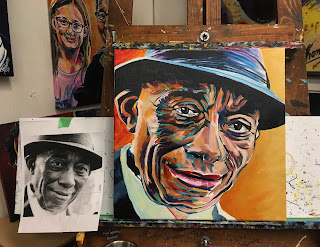 Much like the 9 paintings I did of Mayor Naheed Nenshi of Calgary, I think I needed to learn or experience something with the portrait of Mississippi John Hurt.  He was a challenging subject as there was light coming from both the left and the right. Finding the right colour and light balance felt like a game of ping pong; I was going back and forth between colour palettes trying to find the one that would best express this blues legend. 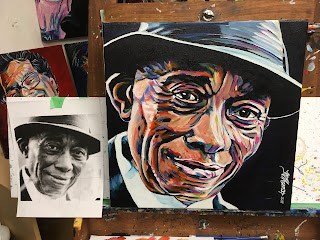 As I have grown older, I have become more attuned to the messages that my body is giving me.  I am over 70 days into a healthy eating program because my body was telling me that it was time.  Each morning I was waking up with a dull pain in my lower back.  It was my cue to lose a few pounds.  I listened.  Over 70 days and 19 pounds later, I no longer wake up with pain.

I set a goal to get to 169 pounds, as it would be a new low in my adult life.  I'm not sure if I'm stubborn or obsessed, but I'm not transitioning into regular eating until I get there.  Even though it is just a number, my body tells me the process of getting there is important.  I have just under three more pounds to go.
Email Post