There was a reason the idea popped into my head to paint Nenshi nine times.  There was something I needed to learn or experience.  I really felt that last night.

I wanted to paint a monochromatic version of the Calgary mayor, just using one colour in shades of light and dark.  One colour became two, then three and four.  Finally, the floodgates opened, and all my usual suspects came out to play.  In the end, I really disliked this particular portrait. 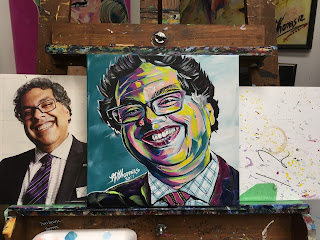 In the beginning, the proportions were wrong.  Nothing I could do from that point onwards could fix the fundamental errors that took place right at the beginning.  This one feel more like a caricature than a portrait.  Sadly, that wasn't my intention or hope. 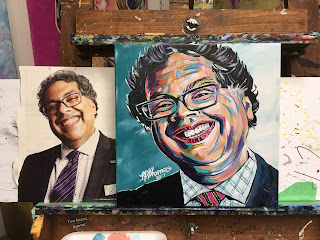 After trying to save the painting a number of different ways, I acquiesced to the direction it was going and called it done.

ANOTHER LESSON:  mistakes are what make us better.  It's better to embrace and honour them, then to try and cover them up.

I felt it was important to share this less successful outing, almost like it is an essential ingredient to what the universe wants me to take away from this exercise of painting Mayor Nenshi nine times.

I have four more painting left to do to complete the set of nine.  What am I going to do when they are done?  Great question.  I've been reflecting on that question since I first started.  Part of me wants to donate them to a Calgary charity and see if they can raise some money from them.  I feel a debt to that city for welcoming our family during evacuation.  Having these fun little portraits of Mayor Nenshi scattered throughout their city would be a fun thing.  It we can raise some money for good at the same time it would be a lovely thing.

I am most interested in seeing the nine paintings brought together in a single image and what that collection will express or reveal.
Email Post