I went to work on a commission project last night, adding the first layers of colour after having sketched out the large portrait the night previous.  After about an hour and a half, I started feeling terribly tired.  Maybe it was because I didn't get my requisite nap at lunch yesterday, or maybe it had been a long week, but I just wasn't feeling it.

In these moments, I've generally done one of two things:  either I sucked it up and powered through or I put away the brushes and went into the house.  I made a different choice last night.  In a flash of creative desire, I grabbed a small canvas and quickly added colours: yellow, red, pink, lime and blue.  I set it aside to dry for a few minutes and returned to my commission project, already recharged, just by shaking things up.

I glanced up at my inspiration wall and saw the visage of Calgary Mayor Naheed Nenshi staring down at me. 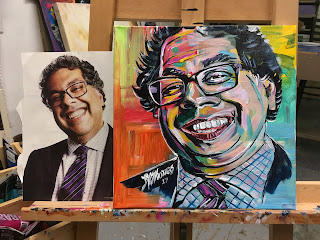 I put a dollop of Payne's grey on my pallete, grabbed a half-inch angle brush and began chiselling out the features of Nenshi's face, glasses, hair, tie and suit over top the bright underlay of colours.  From there I added some skin tones, contrasting hues of turquoise, sea green, light magenta and blue.

It was a very quick study, maybe 20 or 30 minutes from start to finish, but it was exactly what I needed to recharge my batteries.

Allison, a fellow artist, reached out after I posted the above image, said some kind things about it, and suggested that if I adjusted the top chin line and brought it down, it would elongate things to make it more representative.  Excellent call!  That small adjustment made quite a difference. 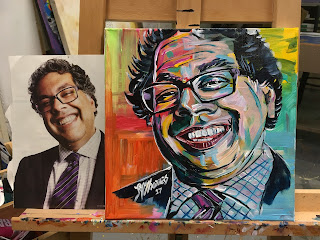 I suspect that I will return to Nenshi again, maybe when I hit another wall.  I am a fan, so that helps drive the inspiration.  Warhol did soup cans; I've been doing Frankenstein monsters.  Maybe it's time to move to Nenshis.
Email Post