I am a child of the 1980's.  I fell into puberty at the dawn of the decade as Ronald Reagan took his oath of office and graduated half way through the 10-year stretch.  Being at The Awesome 80's Prom was a complete blast to the past, though I have no memories of actually having had a prom, in the traditional sense.  My mind goes to the grad party we had in a big quonset out on Shianne's farm. 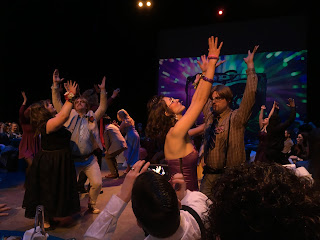 The music, clothing, attitudes, cliques and hair styles all combined to bring those of us of a particular age back to our high school days.  The dinner theatre experience, a fundraiser for Waypoints, is set in 1989, which, in some ways, is a planet away from 1985.  However, there were many things that rang true.

As an actor, I kept thinking how exhausting the dinner theatre format must be for the performers.  They were there when we arrived, and they played out all kinds of improvised shenanigans as we were enjoying our meal.  And I imagine that they were there right to the end, though Heather and I slipped out before the announcement of the voting result for Prom King and Queen.  Some characters never stopped moving and dancing through the whole thing.

As I looked around, guests were laughing, reminiscing, dancing and having the time of their lives.  The immersive dinner theatre format is a home run, and a great time was had by all.

Congratulations to Director Michelle Thorne and her entire team for making it happen.  The number of moving parts behind the scenes to produce an event of this calibre is difficult to comprehend.  They pulled it off and Waypoints raised some wonderful dollars in the process.
Email Post