Last night, I set out to make up for my unfortunate portrait of Nenshi from the night before.  Like someone on Facebook pointed out:  even Warhol had off days.  Indeed I did and indeed I do.

Using established methods (drawing first) and a little bit of extra time (2.5 hours instead of 1 or less), I was able to produce a portrait of Mayor Nenshi of Calgary that I am quite happy with.  In fact, of the 6 I have done so far, it is my favourite. 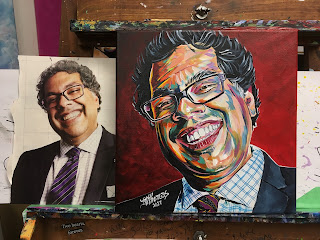 It came together slowly and surely.  In fact, through much of the process it didn't look good at all.  However, I trusted the process that I have developed over 500 paintings and what will be three years in June, and it turned into quite a lovely capture of the man.

A troll on Twitter (@ratfreealberta) suggested that this is an exercise in "suck uppingness".  This guy is hilarious, though he is wrong.  I have no vested interest in connecting with or impressing the mayor of a city that is 8 hours to the south.  My interest is in following a creative instinct and seeing where it takes me.  I'm also keenly interested on the composition of the nine paintings that will result, including the out-of-proportion Number 5 from the night before.  The imperfection is part of the story, an essential ingredient in the journey. 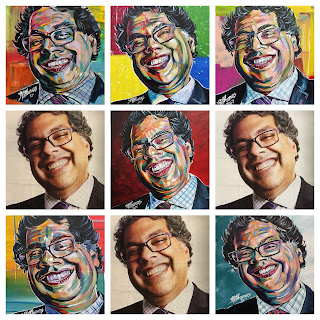 My appreciation of Nenshi the politician is superficial at best, ill-informed at worst.  I don't follow Calgary municipal politics at all.  That said, I met Mayor Nenshi at a number of events when I was a municipal councillor here in Wood Buffalo and have attended a few events in my post-political life where he was speaking.  I am a fan of his communication skills.  He is a great speaker and deeply committed to arts and culture as being foundations of a strong, vibrant community.  That is where my knowledge and appreciation of Nenshi starts and ends.  I've also grown to appreciate the nuances of his face and discover something new each time I paint his portrait.

Numbers 7, 8 and 9 will complete this project.  By Friday night I should be able to share the final results.