In walked The Great One

Fort McMurray was aflutter yesterday as sightings of The Great One started popping up on social media.  For a lot of people, it seemed like a far-fetched dream.  Edmonton would be playing in Anaheim later in the day; what the heck would he be doing way up here?

As it turned out, Wayne Gretzky - I was about to call him Mr. Gretzky, then I caught myself; Mr. Gretzky was his dad, Walter - was in town with a large contingent of leaders from TD.  They were here for a series of engagement events, including a luncheon with first responders and community leaders where #99 would be the honoured guest and speaker.  Wayne made surprise visits to the branches and even stopped into Tim Horton's to grab a coffee and inspire some smiles.

I can't imagine being a person so revered that everywhere you go creates fandom mayhem.  Wayne Gretzky seems to do the superstar thing so graciously.  That was certainly my observation the last time he was in town for the One on One Banquet with Keyano College and it was what I saw yesterday. 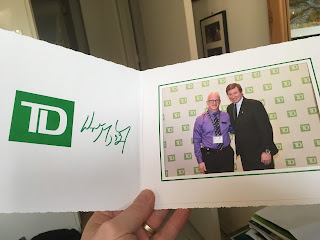 The good folks at TD had one room set up with a photo wall where each guest joined Wayne on the carpet for a quick handshake and photo.  At the end of the luncheon, we all left with a print of our moment with greatness.

Frank McKenna, Deputy Chair of TD, and former premier of New Brunswick, was the facilitator of the discussion with Wayne on the stage.  The talk was mostly of hockey, but also the long association that the famous hockey player has had with the bank.  He opened up his first account with them back when he was a teenager.

A question and answer session followed that included lots of sage queries from first responders about topics ranging from the role of instant replay to how the game has changed.  I went down a different path when I stood up to ask my question.

"Where were you when you heard about what was happening in Fort McMurray one year ago, how did you respond, and what inspired you about how this community responded?"

He made eye contact with Mr. McKenna to confirm that he was actually at an event very similar to the one that was in progress out on the east coast when they heard the news.  He participated in early conversations about what TD could do to help the people of Fort McMurray.

The question period wrapped up, the audience rose for a standing ovation, and Wayne left the Shell Place ballroom, hopped in a car and made a beeline for the airport; he had a pressing engagement with the Oilers down in Anaheim.