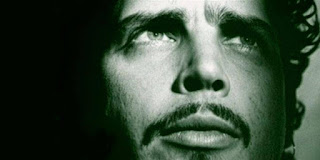 As news spread about the death of American musician, singer and songwriter Chris Cornell, I had no inclination to paint his portrait.  Until yesterday, the name "Chris Cornell" would not have connected with a face or the name of his band Soundgarden.

Everything changed though when my friend and colleague Hanna expressed her sadness over his death and showed me a few pictures.  One jumped really right out at me.

As soon as we heard the news that he died at his own hand, I started remembering the day that Robin Williams did the same and the painting I did that evening.  There was a chilling similarity being out in the studio last night. 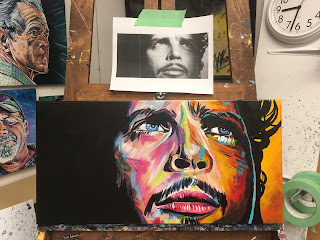 We are getting better at talking about mental health, but we need to do so much better.  It appeared that Chris Cornell had the world in the palm of his hands, but there was still a pervasive darkness drowning out his light.  Listening to his music for the first time while painting his portrait, that theme of sadness seemed to pop up on a regular basis.

I'm thinking of his two daughters and one son.  They are a similar age to my own children.  I'm thinking of his wife Vicky, who was with Chris a similar number of years that Heather and I have been together.  My heart is with them today as they come to terms with what has happened and the shocking mental image of how he took his own life. 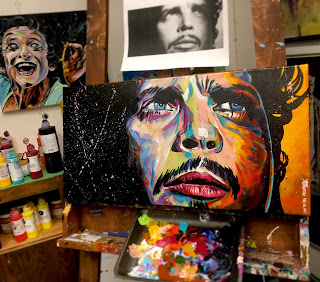 As I observe the reactions of fans, it is clear that Chris's lyrics spoke to people in a profound way.  This portrait is only the beginning of my discovery of Chris Cornell.  I honoured what I saw in the photo and allowed the painting to take me where it needed to go.  My hope is that it appropriately captures the both the brilliance and the darkness, and the magical moments in between.


Little drops of rain whisper of the pain, tears of loves lost in the days gone by.My love is strong, with you there is no wrong,Together we shall go until we die.

This is an excerpt from the song "Thank You" by Chris Cornell, originally by Led Zeppelin.  It rained last night as I laid my head down to sleep.  "Little drops of rain whisper of the pain" captures what washed over me last night.  My thoughts and prayers are with everyone feeling a little empty and sad today.
Email Post