The people I paint

There is one painting in my studio that I will never sell.  It is a portrait of George W. Bush.  One might leap to the conclusion that I'm holding onto it because it holds some political meaning for me.  It does not.  Instead, it serves to remind me that art is struggle.  I worked like a dog on that painting, for no other reason than I needed to.  I struggled with the colour balance, the light and how to treat the background.  I spent hours painting a former American President that I really disliked and somewhat reviled. 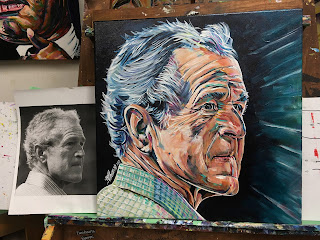 It also represents transformation and evolution.  George W. Bush became a portrait artist late in life and used his fame to propel his creative journey as a way to help veterans.  I appreciate and respect his new path.

I painted Donald Trump while he was in the throws of trying to get the presidential nomination.  I shook my head at the guy then; I shake my head at the guy now.  However, I was interested in exploring his expressive face to see where it would take me.  Among all my paintings, it is one of my favourites. 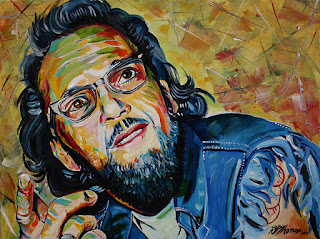 One commission request asked to paint the founder of the Hell's Angels, Sonny Barger.  I didn't know what to expect when that gentlemen came to pick up the finished portrait.  He was a lovely fellow, originally from Newfoundland, not the leather cladded biker dude that I anticipated. 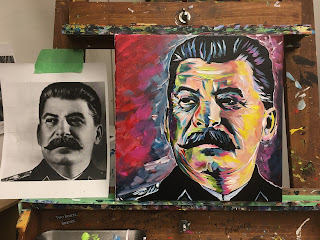 I saw Stalin's face pop up on the computer.  This was one of the most horrific despots of the 20th Century, or any century for that matter, but I was still interested in seeing where his visage would take me.

The couple that reached out to buy that one had a very specific purpose in having it on their wall.  They wanted to incite a reaction from their guests.  In other words, they weren't looking for wall candy; they wanted something that would activate discussion.

Yesterday, I was looking for something different to do, after having spent long hours working on commissions.  A memory stirred that a client was interested in the various figures from the World War II period.

I've done Roosevelt, Stalin, and Eisenhower; I have even painted the Rev. Harry Ploughman, Chaplain of the Fleet for the Canadian Navy.

My dad always had books on the history of World War II around the house.  Through them, lessons in schoool, and movies, Adolf Hitler was a present and menacing force in my youth - images of his atrocities were deeply disturbing and troubling for a young and impressionable kid growing up in the eighties.  So, I felt the discomfort of choosing to paint his portrait. 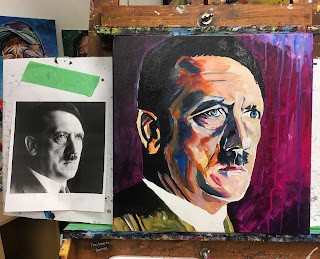 For the purposes of the painting, I put aside the volumes of atrocities and history and focused on the facial features that were in front of me.  I also focused on speed and sought to have a recognizable figure at the end of 30 minutes of painting. 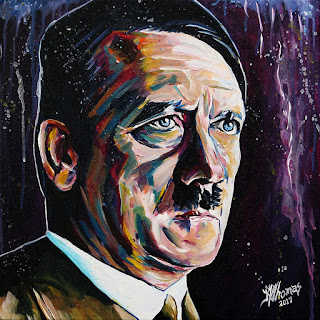 The study was a success, but it required several more hours of work to bring it to full completion.

This painting has a caused strong reactions, positive and negative, and understandably so.  While I didn't do the exercise to illicit a particular response, I accept the fact that it was upsetting to some and intriguing to others.