A life of selfless service

As soon as the plane landed in Toronto today and I was safe to reconnect to the outside world, I read the news about the passing of my former council colleague and friend Dave Kirschner.  Both my wife Heather and son Dylan reached out to let me know.

I was there on the day that Dave got the diagnosis of having MSA (Multiple Systems Atrophy), a rare neurological disease.  We were scheduled to attend a municipal conference down in Calgary. Dave had stopped in Edmonton on the way down to meet with his doctor.  While he was somewhat prepared to find out that he had Parkinson's, nothing could have prepared him for what was ostensibly a death sentence.

Most people, myself included, would probably be a blubbering mess after getting news of this magnitude.  Not Dave.  He arrived at the hotel and discovered that there were no rooms at the inn.  As if his day wasn't hard enough.  Something had gone wrong with his booking and the hotel was packed with conference attendees.  He ended bunking with me for the night, and shared his devastating news.  As crazy as it sounds, I'm glad they didn't have a room for him.  It was a blessing that he didn't have to be alone on that first night of the remainder of his life. 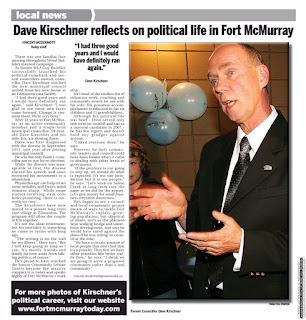 Dave was a man of great character and integrity.  He had been elected to serve on council and represent the citizens.  He did so for as long as his body would let him.  None of us would have thought any less of him if he had bowed out of the conference that day.  He stayed and he fully engaged, choosing to move forward with gracious acceptance and unstoppable conviction.

Eventually Dave had to resign from council and move into a facility down in Edmonton.  I had the good fortune of being able to visit him there in 2014.  While it was more difficult to communicate, he was still the social butterfly and selfless man he always had been.  Around the lunch room, he was the one making sure everyone felt welcome and important.  He made a point of kindly introducing me to everyone at his table.  I felt both honoured and humbled. 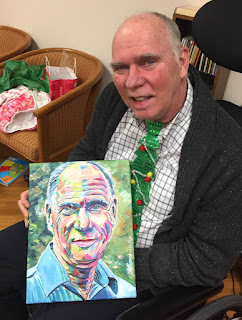 I was grateful to have included Dave as one of my subjects in the painting marathon I did on the opening day of my solo exhibition back in December of last year.  I wanted to focus on subjects who had influenced and inspired me.  Dave certainly did both.

Dave embraced his remaining years with grace and courage, spending precious time with family and friends.  His attitude was incomprehensibly positive, his faith unshakable. 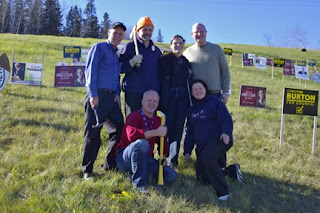 My memory of Dave will go back to the day that a bunch of us election candidates created the word V-O-T-E on the side of the hill going up to Abasand.  He worked side by side with like-minded citizens wanting to build a better community with a big bright smile and sincerity that just didn't quit.
Rest easy my friend.  Thanks for all you have done over so many years.