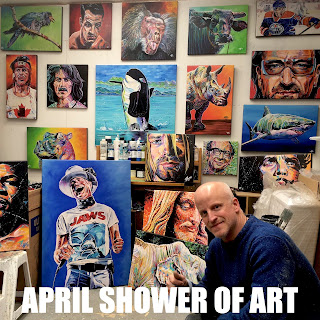 I thought if I used "April Shower" in the title of my next auction, we might get one.  As I look out my study window this morning, I see a long row of icicles hanging off my neighbour's roof, along with a ridge of snow.  This is, beyond a shadow of a doubt, the longest winter of my life.  Perhaps I should say the longest that I remember; Mom says the old timers recall that 1970 was pretty long, too, as was the year of my birth, 1967.  All that said, while this auction is on (April 16-22), the weather is supposed to be much warmer, and maybe, just maybe, we'll have a shower (or two).

In this month's art auction we have a wide mix of items, including 7 originals, 3 limited editions, and 10 gallery canvas prints.

Here are a few items to watch for. 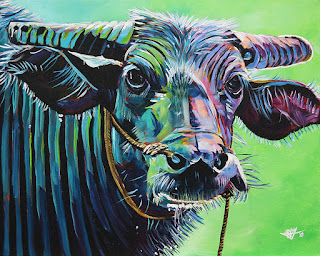 I saw this fellow in a field right in the middle of the Cambodian village where we were building homes with Bracelets 4 Buildings in December.  He was intently looking at me as I picked up my camera and started snapping a whole bunch of pictures.  I love the colouring in this one and have enjoyed having him on the feature wall this winter. 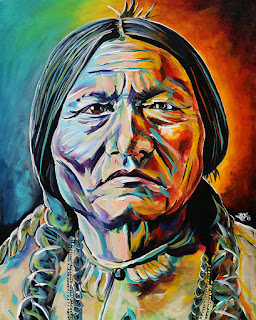 Sitting Bull was the Lakota Chief who had a vision in which he saw many soldiers, "as thick as grasshoppers," falling upside down into the Lakota camp, which his people took as a foreshadowing of a major victory.  About three weeks later, the confederated Lakota tribes with the Northern Cheyenne defeated the 7th Cavalry under Custer.  This is the first print of this portrait that I did earlier this year. 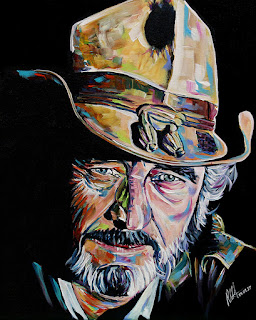 Don Williams was a country music singer that I always appreciated.  He was the "Gentle Giant" with a gentle voice that was so soothing to listen to while painting his portrait the day after he passed away last year. 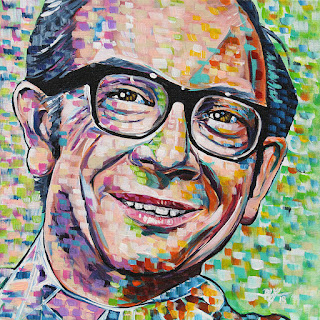 A typical morning in my childhood consisted of three different television shows, the first of which was alway Mr. Dressup, starring Ernie Coombs.  There is no way I can fully appreciate how many lessons I learned while watching the show through my formative years.  From Casey and Finnigan to the glorious tickle trunk, Mr. Dressup was a big part of my growing up in small town Saskatchewan. 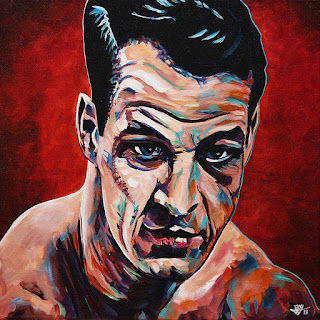 Gordie Howe will always be revered as one of the greatest players who ever played the game of hockey.  He played an incredible 26 seasons in the NHL and an additional 6 in the WHA (World Hockey Association).  Aptly known as "Mr. Hockey", Gordie was considered the most complete player to ever play the game.  Painting his portrait last year at the Pro-Am luncheon in Calgary, listening to his sons, Mark and Marty, tell stories, it was clear that while he was loved off the ice, on the ice he was feared, and deeply respected. 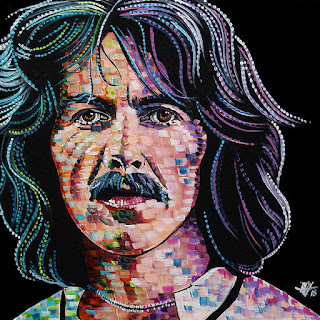 A member of the Fabulous Four, George Harrison also co-founded the Travelling Wilburys, a supergroup that was formed in the late 80s.  He was celebrated as one of the greatest guitar players of all-time and passed away at the young age of 57 way back in 2001.  This portrait was done using my new "block" style. 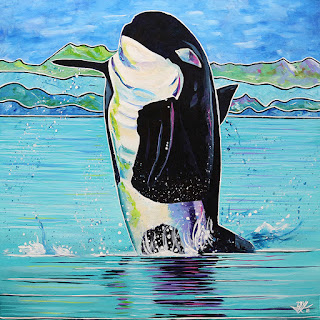 While this creative journey consisted mostly of portraits of people during the first few years, I eventually began exploring the animal kingdom.  Almost four years later, I find myself needing to mix things up, and love to find new creatures to bring to life on the canvas.  This portrait of an orca is a great example.  It was so much fun playing with the splashes and putting the stylized mountain range in the background. 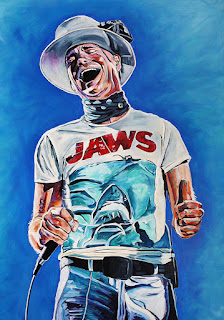 Song in Heaven captured a moment of bliss in the incredible life of Gord Downie from The Tragically Hip.  There will only be 20 of these ever produced; the number remaining is dwindling fast.

How does the auction work?

We use a website called 32 Auctions which makes things incredibly easy.  You can register for free by clicking here and preview all 20 items.  Bids will open at 9 am MST on Monday, April 16th and close at 9 pm MST on Sunday, April 22nd. If you bid on something, the system will send you an email when (or if) someone tops your bid.

If you end up winning an item, we will make arrangements for payment and pick up (or delivery) offline.  Simple as that.

Heather and I are honoured to use a portion of sale proceeds to enable to our charitable, community and humanitarian work.  Just in the last week, your support has helped us help Some Other Solutions, The Gordie Howe Centre for Alzheimer's Research and Education Society and two families grieving the losses of loved ones who perished on the Humboldt Broncos bus.  Your support also enables me to make school visits.  This morning I'm popping into a class at St. Kateri school.