Painting Parker and his coach

The requests to paint Humboldt Broncos Coach Darcy Haugan and goaltender Parker Tobin came in within hours of each other.  It is humbling to be asked to do these kind of projects, as families and friends in a profound sense of grief trust me to honour their loved ones.  When these kind of requests come in, they take priority over everything else.

It was my friend Brandon who asked me to do a portrait of Coach Haugan.  He knew him well, was coached by him, and considered Darcy one of his most important mentors.  I could hear the enormity of the loss in his voice, and how much he was counting on me to capture the essence of the man, when we spoke on the phone.  He connected with Darcy's wife Christina; she picked a couple of images that might work. 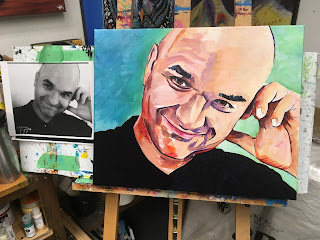 Whenever I find myself in the position of honouring someone who has died, I do my best not to get emotionally charged.  Instead, I focus on the tiny details in the subject's picture and allow the painting to take me where it needs to go.  His warm smile, friendly eyes and distinctive, yet subtle, forehead lines all emerged.  The background started off deep green on the right side, one of the Broncos colours, but quickly became softer and lighter as I went along. 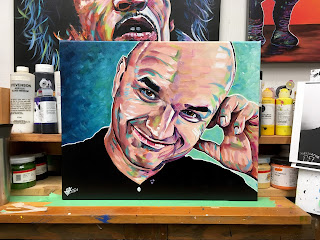 Written on the back of the canvas, as a reminder to children, are three powerful words: "Character determines success".  It was a quote that meant a lot to Coach Haugan, and to the boys and men he coached over the years, including Brandon. 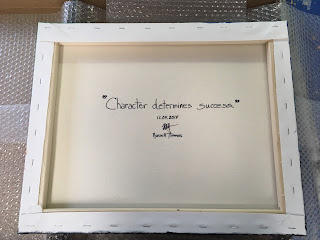 I'm not exactly sure of the journey the painting took after it was completed, except that it started out on a charter flight to Peace River.  All I know for sure is that it is with Christina, Carson and Jackson thanks to the kindness and love of Brandon and Jodie.

I got the call to paint Parker Tobin and knew right away that it would be on the easel as soon as the coach's portrait was completed.  I felt like I was ready to do this painting as I had just done my first goalie painting days before down in Calgary.  Legendary goaltender Sean Burke was my subject at a major fundraiser for The Gordie Howe Centre for Alzheimer's Research and Education Society.  Having had this experience with goalie pads, gloves and mask really set me up to do justice to Parker. 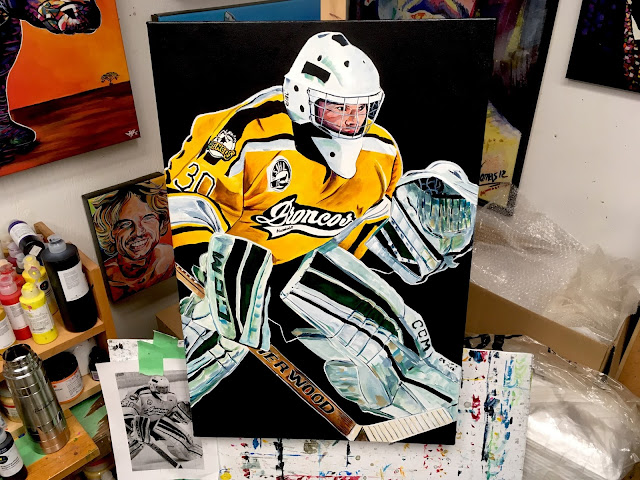 The connections to this young man, born and raised in Fort McMurray, were all around me.  I quickly discovered that friends of mine were close relatives of his, and were expressing their shock and sadness on social media as word of the tragedy spread.  It was important to me to give this complicated portrait the attention it deserved, and that Parker earned.

I spent hours drawing it out.  I had to make sure I had the details right before a single stroke of colour went on the canvas.  The painting itself took a full day.  Andrea, the friend who reached out to ask me to do this project on behalf of the family, dropped by to pick it up on Thursday evening.  Her reaction said everything. 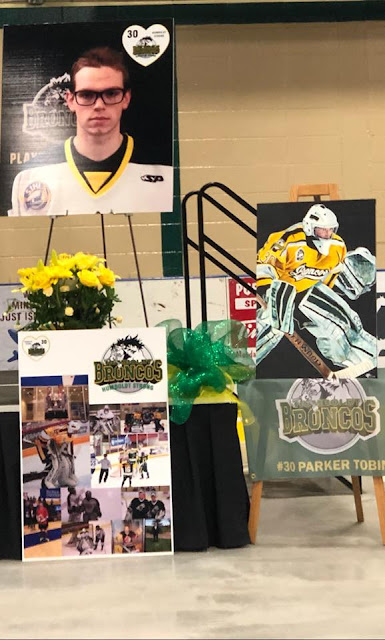 I'm really happy how it turned out and that it is resonating with thousands who saw it at the service and are seeing it on social media.

We are making prints of the painting available to those who are interested.  Net proceeds from those sales will be going to the GoFundMe campaign raising money to create a scholarship in Parker's memory.  As I am typing this, the campaign has already raised over $80,000.

All of us struggle for what to do to help people who are experiencing profound grief.  I feel fortunate that I can spend some time in my studio and do something that perhaps helps a little.