In the zone with the rappers

I can't explain what happens when I paint rappers.  Maybe it's the fact that they perform on the edge that frees me up to have fun and use unlikely colours and styles. 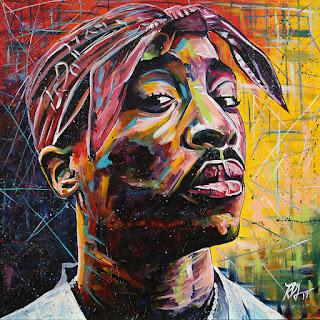 When I painted Tupac it was like I was high on something; I was not.  I found myself in a state of creative flow and ended up with a piece that seemed to sizzle.  I tried listening to his music while painting it.  That lasted for about two minutes.  Too much swearing for me. 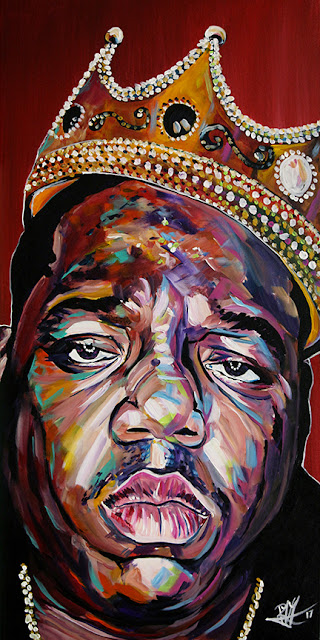 Painting Notorious B.I.G. had a similar effect.  It was so fun to do this one.  I made a second attempt at listening to rap and was much more successful.

I have no memory of how Eminem had popped into my mind on Monday afternoon.  He has been suggested numerous times.  I had finished two animal portraits in a row and needed something fun and human.

On Monday night, I created the crazy and colourful background. 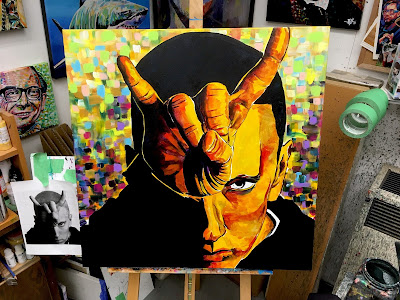 On Tuesday morning, I brought in the first layer of colour on the face. 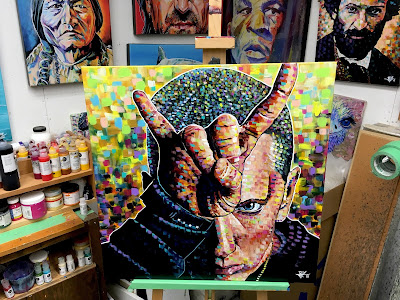 It took three more rounds of painting through the day to bring it to completion.  It is a rare time when I go beyond my 4 pm cut-off point, but I certainly did with Eminem.  I couldn't stop.

He sold immediately, disappointing several people, including a client who had made a request some time ago for a painting of this famous rapper.  Feeling bad that I had missed this client's request, I committed to doing another portrait, a new one, right away.  It became Eminem week in Birdsong Studio. 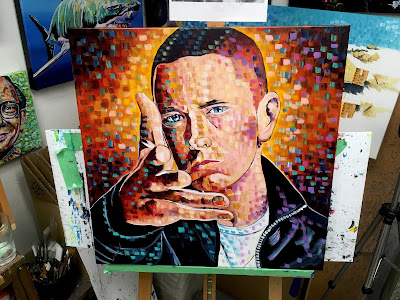 I started, as I often do, by laying down warm tones: alizarin crimson, cadmium orange, deep yellow, and dioxizine purple. That took most of the afternoon.  After dinner, I started going crazy with little dabs of colour, utilizing my "block" technique.  Again, I felt like I was in that special place of creative flow and didn't want to stop.