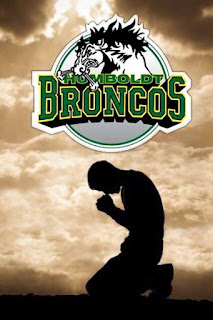 When breaking news happens, I get notifications on my phone.  That is how I became aware of the Humboldt Broncos crash so early in the process.

I was rolling into Edmonton from my day of painting for The Gordie Howe Centre for Alzheimer's Research and Education Society (C.A.R.E.S.) in Calgary. 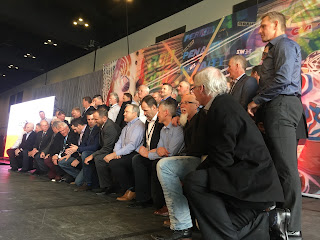 I had been surrounded by over 50 NHL veterans just hours before, veterans that would have felt the impact of the news in a completely different way.  All those guys spent thousands of hours on team buses, rolling through the prairies.

I kept scrolling through Twitter as the evening went on.  By the time we shut off the light - I was staying in a hotel room with my son Dylan, who was in Edmonton for an audition - we both had a sense that it was bad, though it was still too early for authorities to put a number to it.

I woke up with a start around 1 a.m.  While l usually never have electronics by my bed, I had put my iPad within reach as I felt I would want to get an update before morning.  I reached over in the dark, picked it up, and turned it on.  Just moments before, the media had shared the horrific news that 14 people were confirmed dead, another would be added to the list later that day.

As we drove up the highway from Edmonton to Fort McMurray on Saturday, we heard about the accident from every possible angle.  It was clear that it was an event that was galvanizing the entire country and the global hockey community.

A GoFundMe account set up to the support the families illustrates how this event crashed its way into the hearts and minds of millions.  What started out as a $10,000 fundraising campaign is now approaching $5 million.

We arrived home early in the afternoon, had some lunch and unpacked.  I had oodles of time to paint something, but I was emotionally unable to pick up a brush.  Several times, as we drove that long stretch of highway heading north, my eyes filled with tears; I was overcome feeling the weight of what was happening with families across the prairies.

It took me some time, but eventually I decided that I needed to push forward and paint something, if only to get my brush moving again.  I thumbed through a pile of pictures, extra copies left behind from various workshops that I have held over the years.  I wanted something that would be relatively easy and might help clear the emotional fog.  Freddie Mercury jumped out. 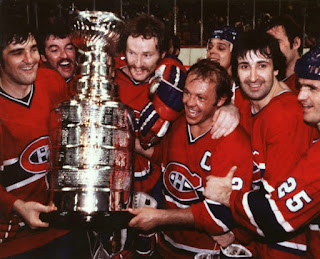 As I laid down the first layers of paint, I began to realize why he was a perfect choice.  Back in the 1970s, when I was a young hockey fan, I loved watching the Montreal Canadians win the Stanley Cup.  As soon as the final game was done and they lifted up the cup, "We Are The Champions" would come roaring through the speakers and my heart would soar.  That is my hockey song, and always will be.  It is a song about champions. 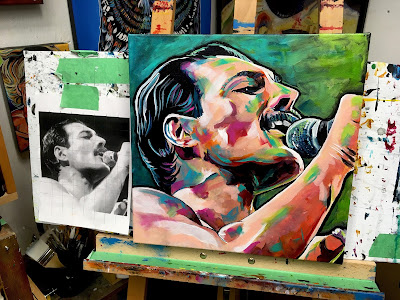 The Humboldt Broncos didn't get to finish their playoff run, but I think it is fair to say that they will be champions in a different way.  They reminded us of the preciousness of life and family, the strength of the hockey community, and the compassion of the nation.  Our prayers are with them all.
Email Post