It was very important to Heather and I to revisit the village west of Siem Reap where we had met many families during our 2017 trip.  We had a number of different options in terms of when to make the 20 minute drive to reconnect, but we chose today.  Ben was on the mend and this short journey would be a good way for him to get back into the swing of things after a bout with the flu.
My stomach was doing a few flips as we made our way out of town.  I thought that I was about to have my turn with the flu, but it turns out I was just nervous about the reunions we were about to have.
We had no idea who was going to be home.  Over and above seeing how they were doing we also needed to deliver a photo book to Mern, the recipient of the home we sponsored in 2017.  I also wanted to gift fine art prints of the various paintings I had done inspired by the people in this bustling village.
All of us were grateful to have Mr. Kria as our driver.  His English, while minimal, would help us bridge the communication gaps, should they arise.  It was also nice to have an air conditioned car for the dusty drive. 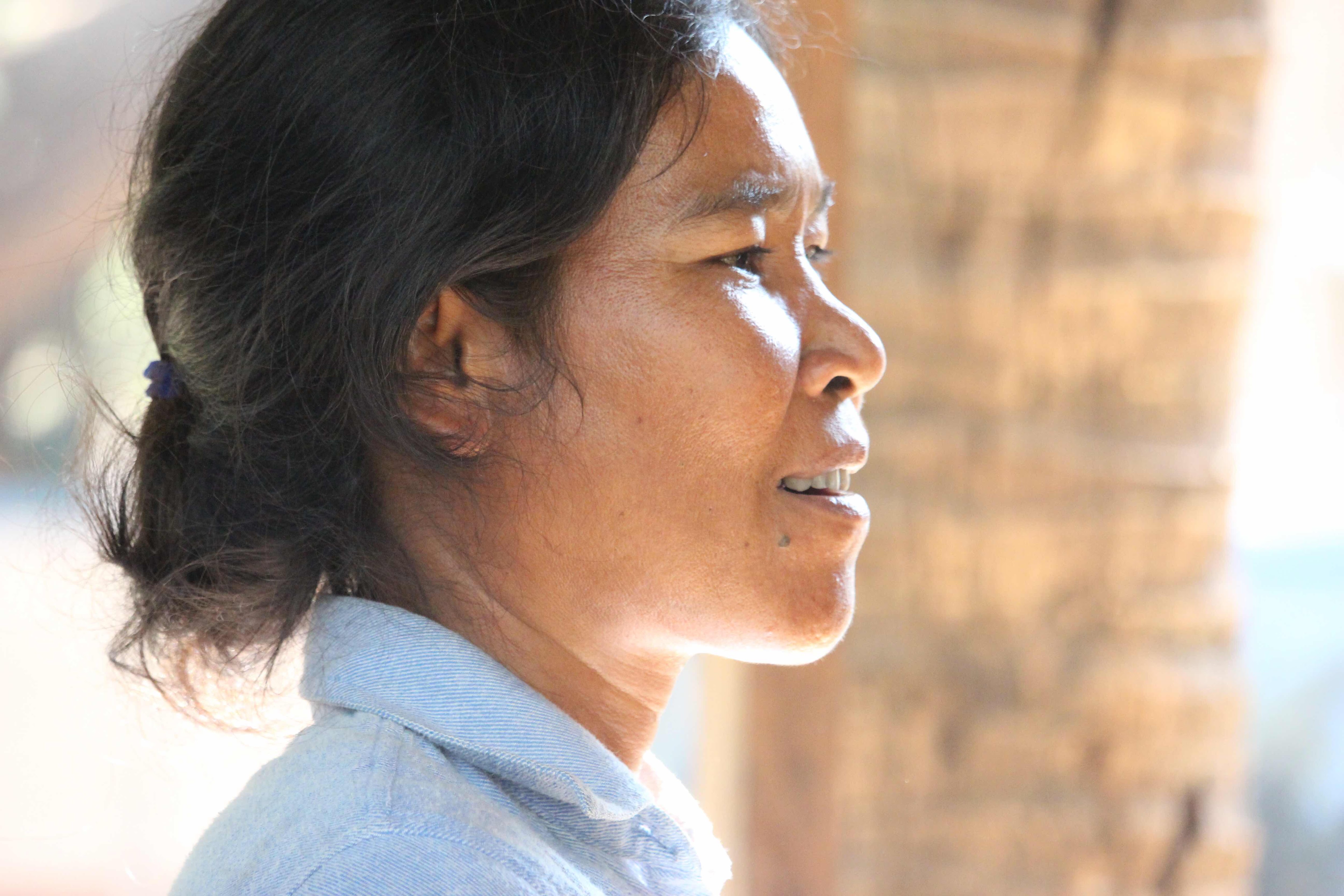 Our first stop was Poy To’s house.  She was the lottery winner in 2017, as there was one prefab home left unallocated.  With little to no notice, she went from living in desperate shelter to having a new house within a couple of days.  The difference we saw then was significant.  The difference we saw after a year was truly remarkable.  She had made some functional improvements and had done a tremendous job cleaning up her yard.  When we asked about the house, the only issue she raised was a troublesome spot where the water leaks during the rainy season.  Other than that, the house was spotless, and the painting of Buddha placed prominently. 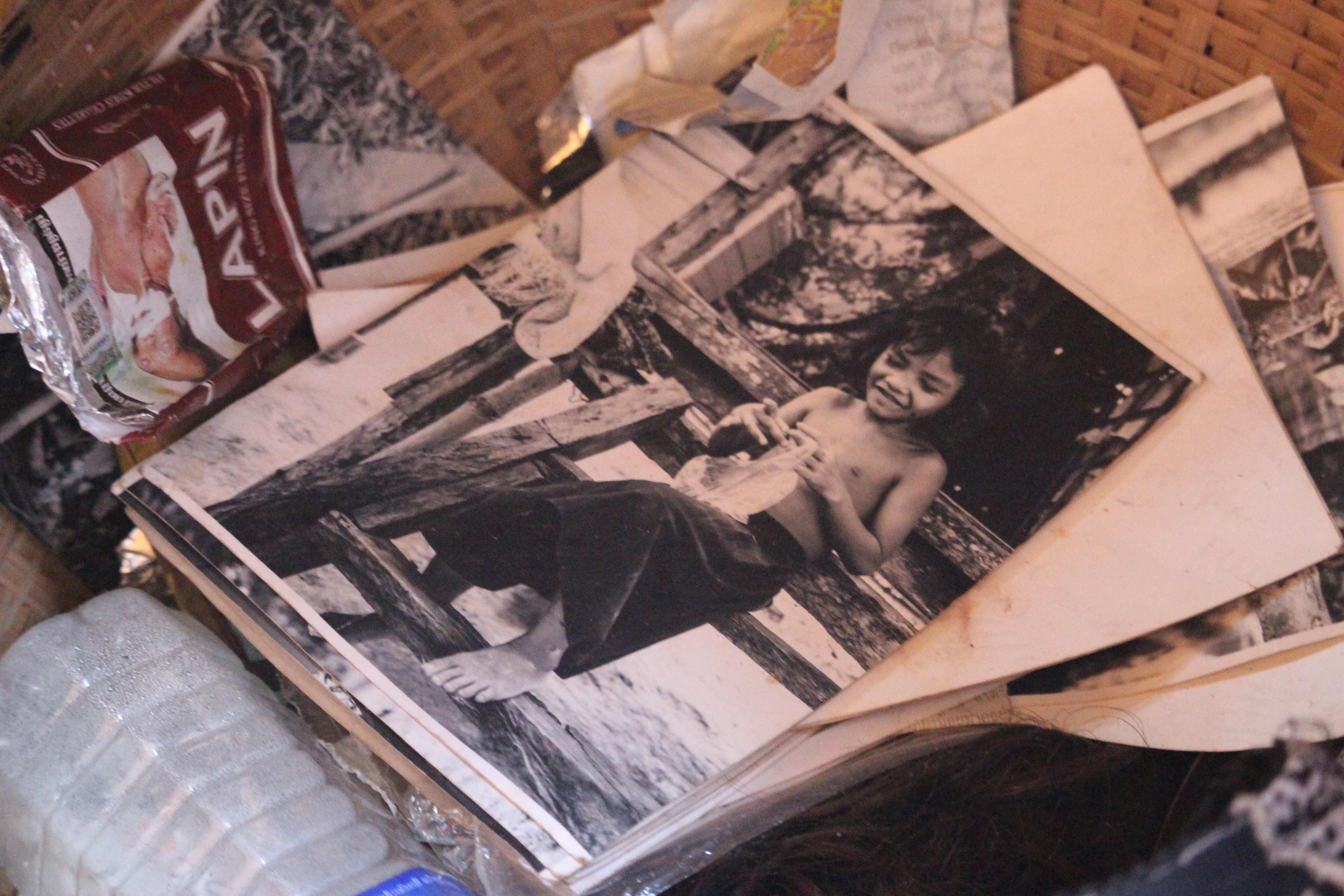 She also had a pile of photographs in a place of honour, gifts from Mark and Alistair, photographers who joined us in 2017. 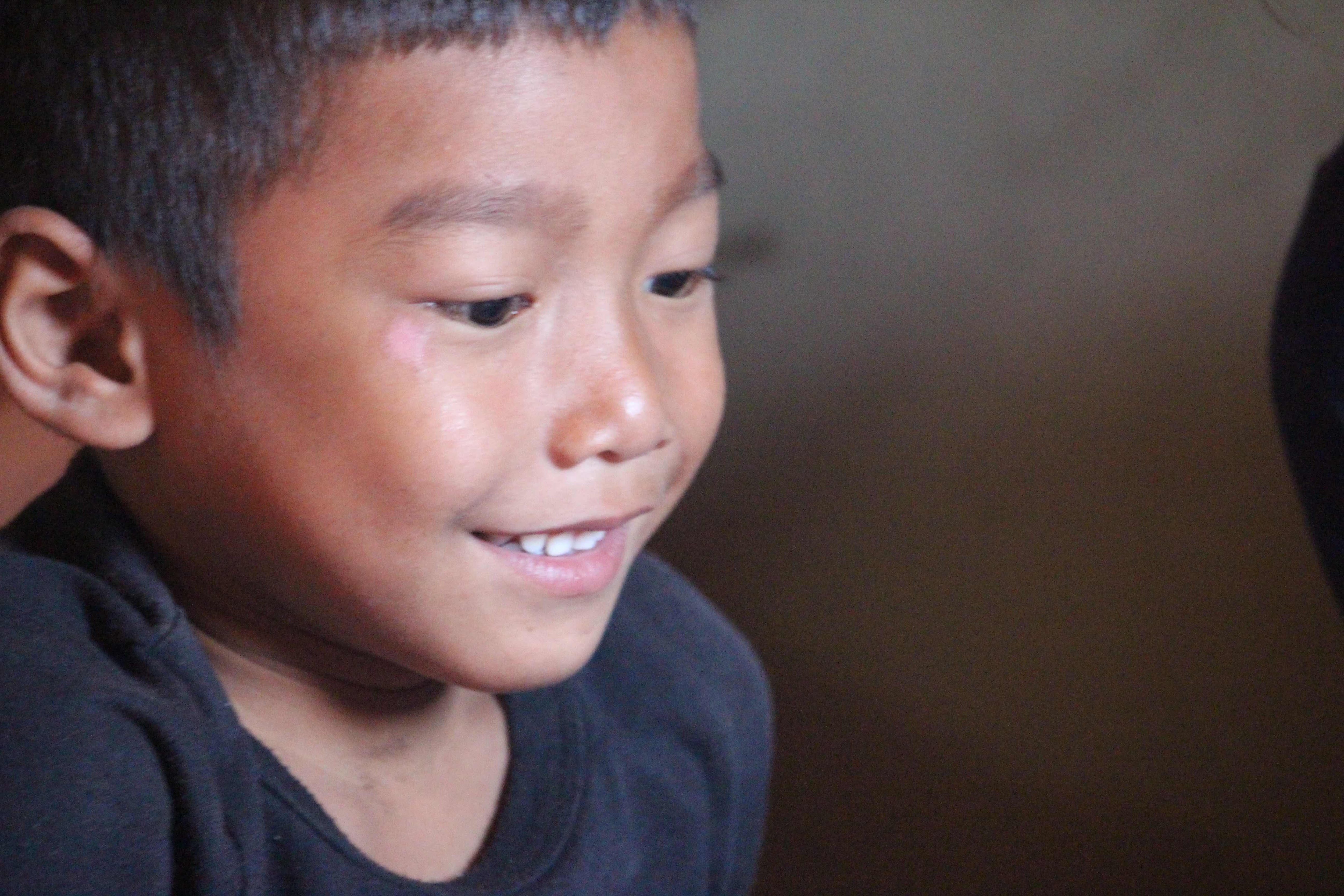 No Pants (Sabeen) came running as soon as we arrived, smiling broadly.  He was the young fellow who left the strongest impression on us.  It was so nice to see him again. 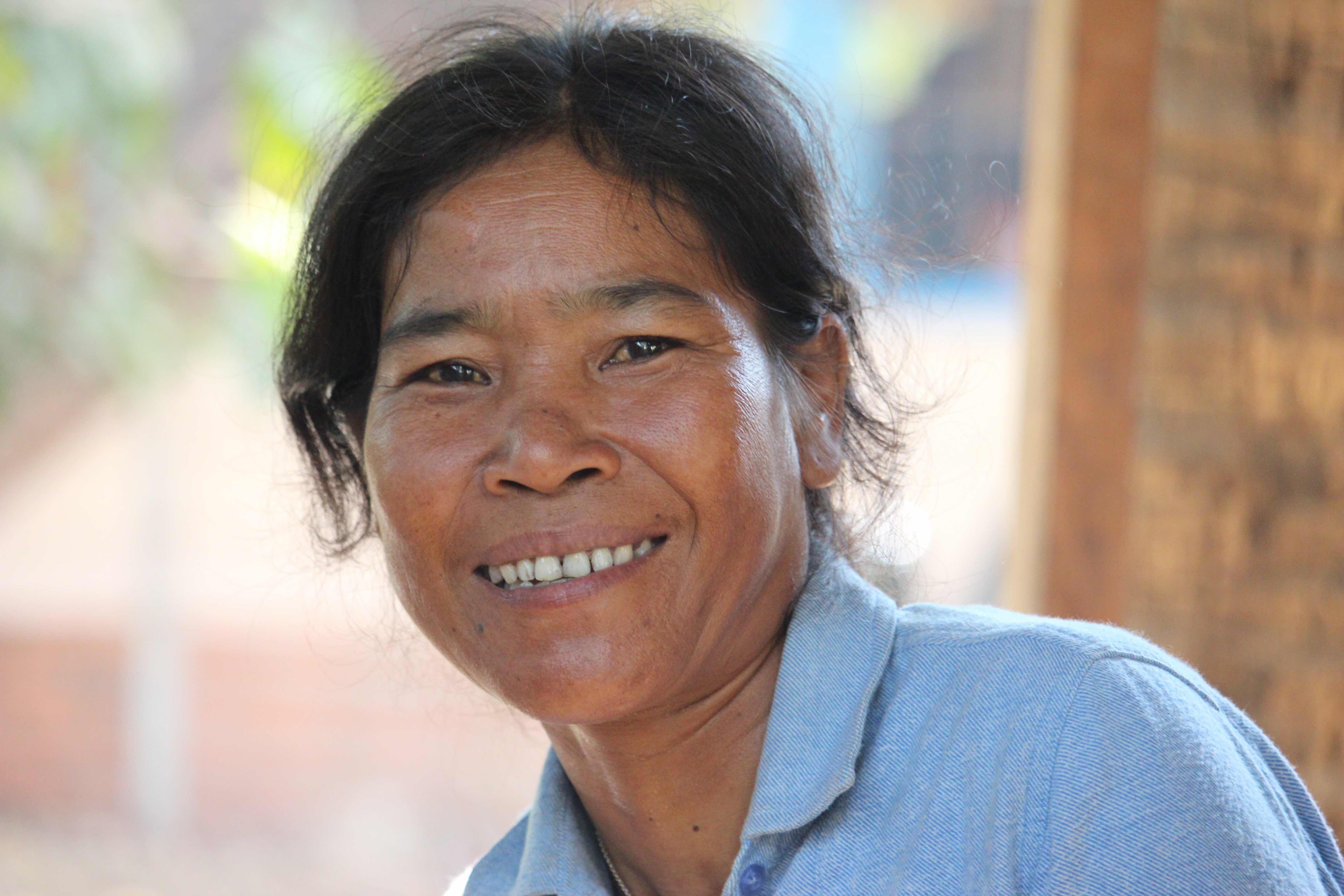 This was a different home with completely different energy from the time we left to come home in late 2017.  Poy To looked great, and her situation was vastly improved.  She expressed so much gratitude for the home and the positive impact it has had in her family’s life. 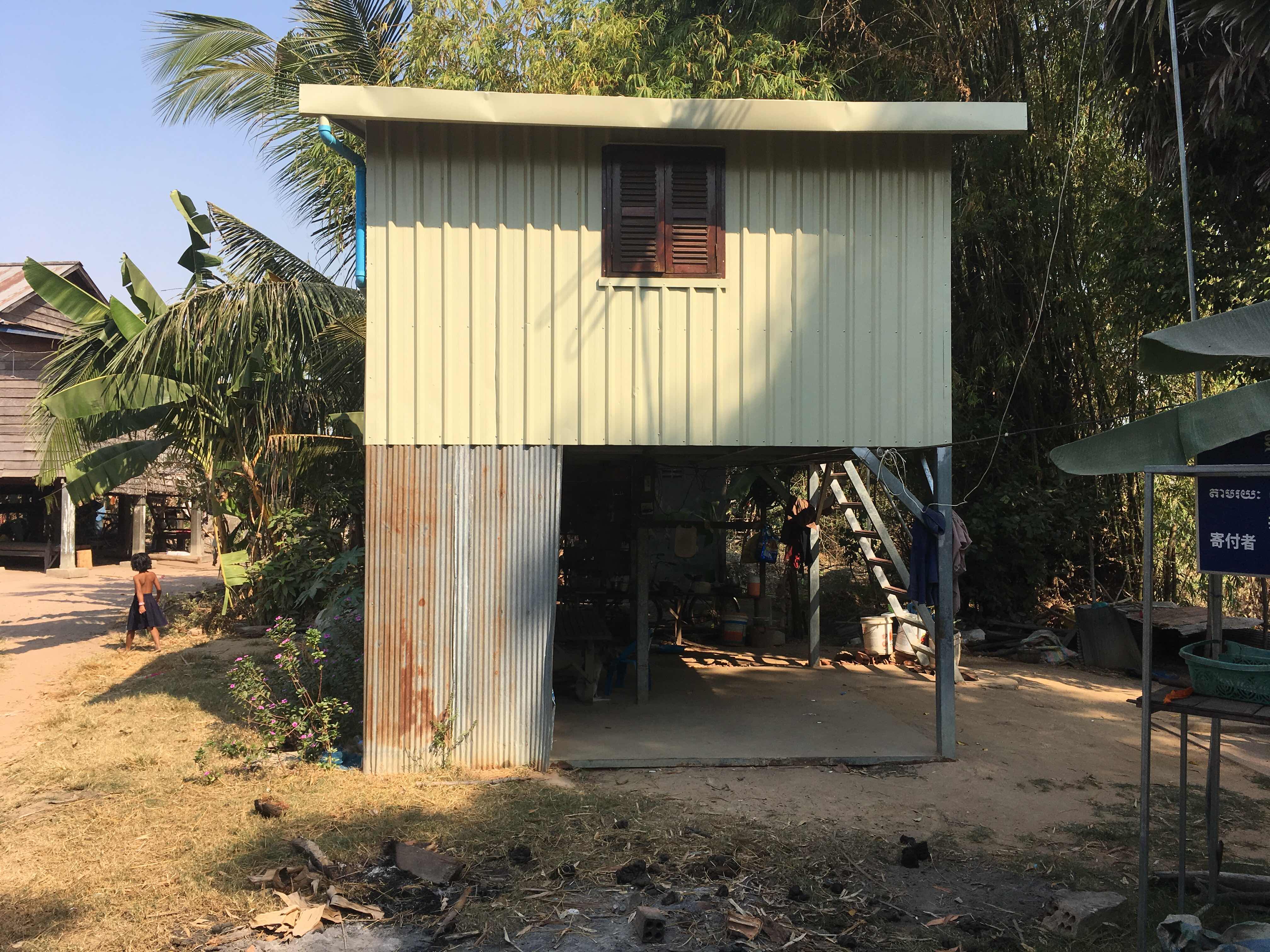 Down the road and around the corner from the local temple was Mern’s house. Several water buffalo were grazing in the field nearby while a family of ducks floated in the slough.  Mern was nowhere to be seen. We engaged several familiar faces to go on a hunt for her while we checked out the many improvements she had made in a year. She had some electrical service - new from last time, and she’d made some modifications to enhance her living space. 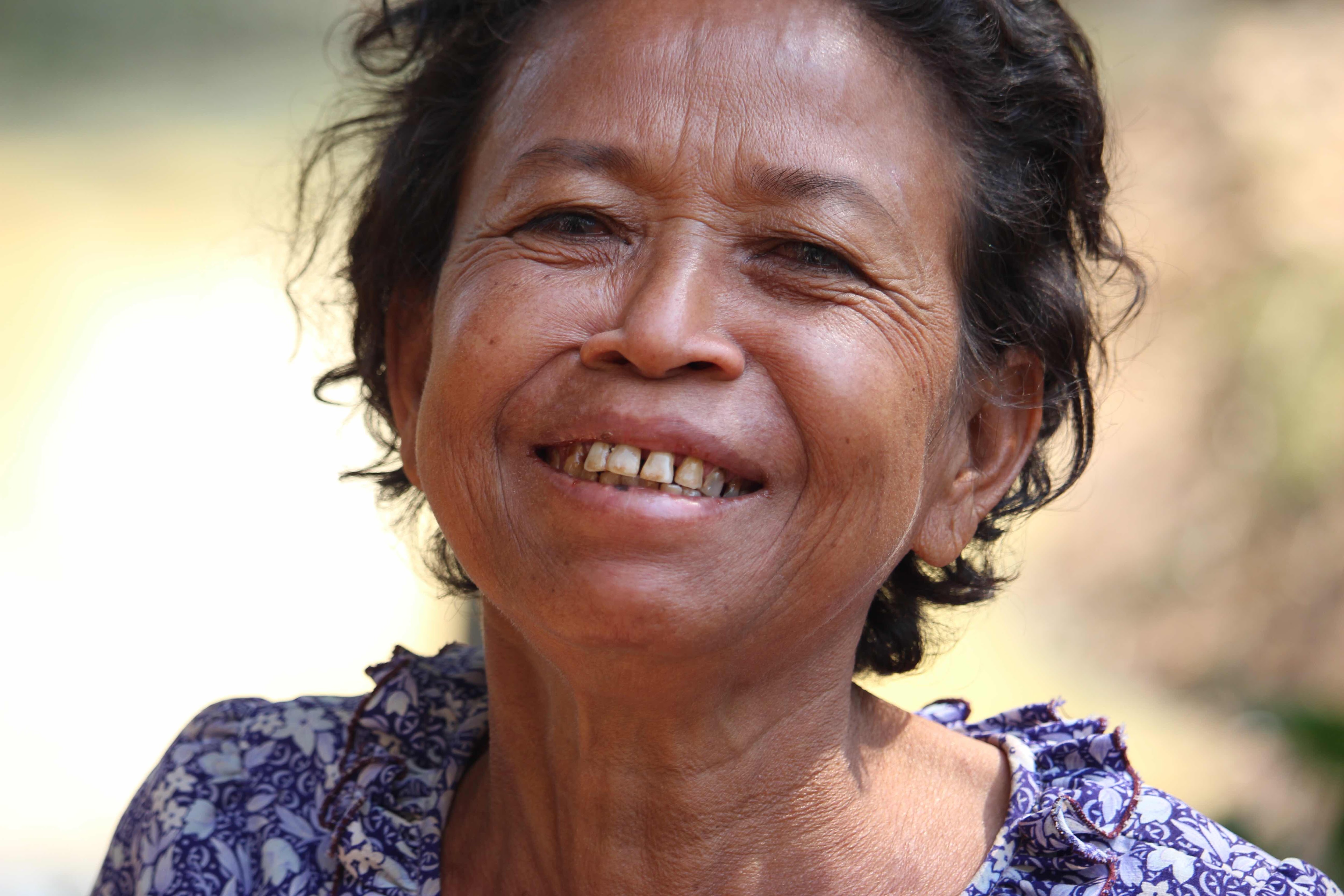 When she arrived, it was a joyous and hug filled reunion. Mern is a character and so full of life and love. We presented her with the Bracelets For Buildings photo memory book and flipped through its pages with her and the neighbourhood children who had gathered around. 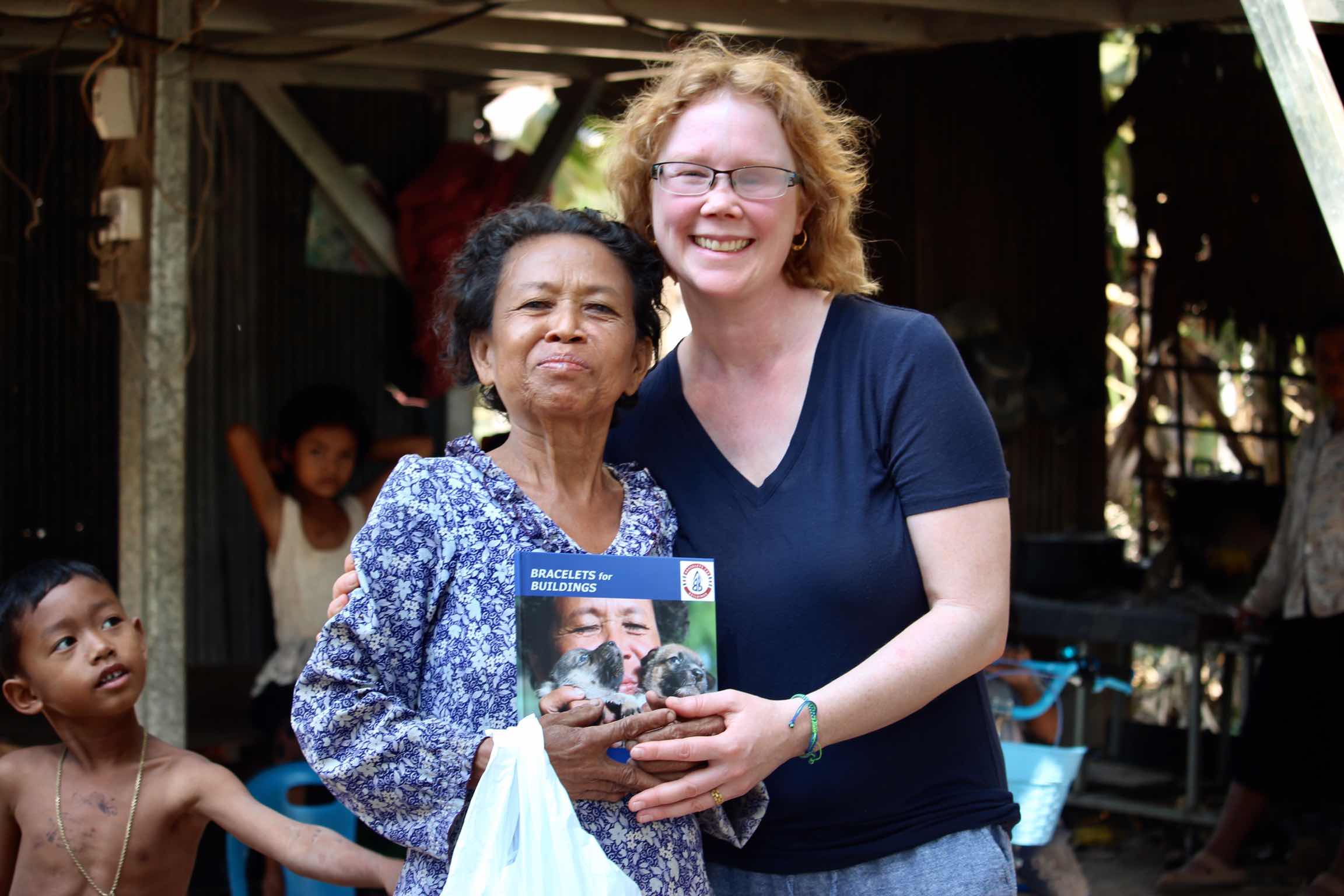 She expressed, through the translator, that she was so poor before and that the gift of the house had changed everything.  She had flowers planted around her yard and she had been able to buy the ducks.  Where there was so little before, she seems to be enjoying new hope and a better life. 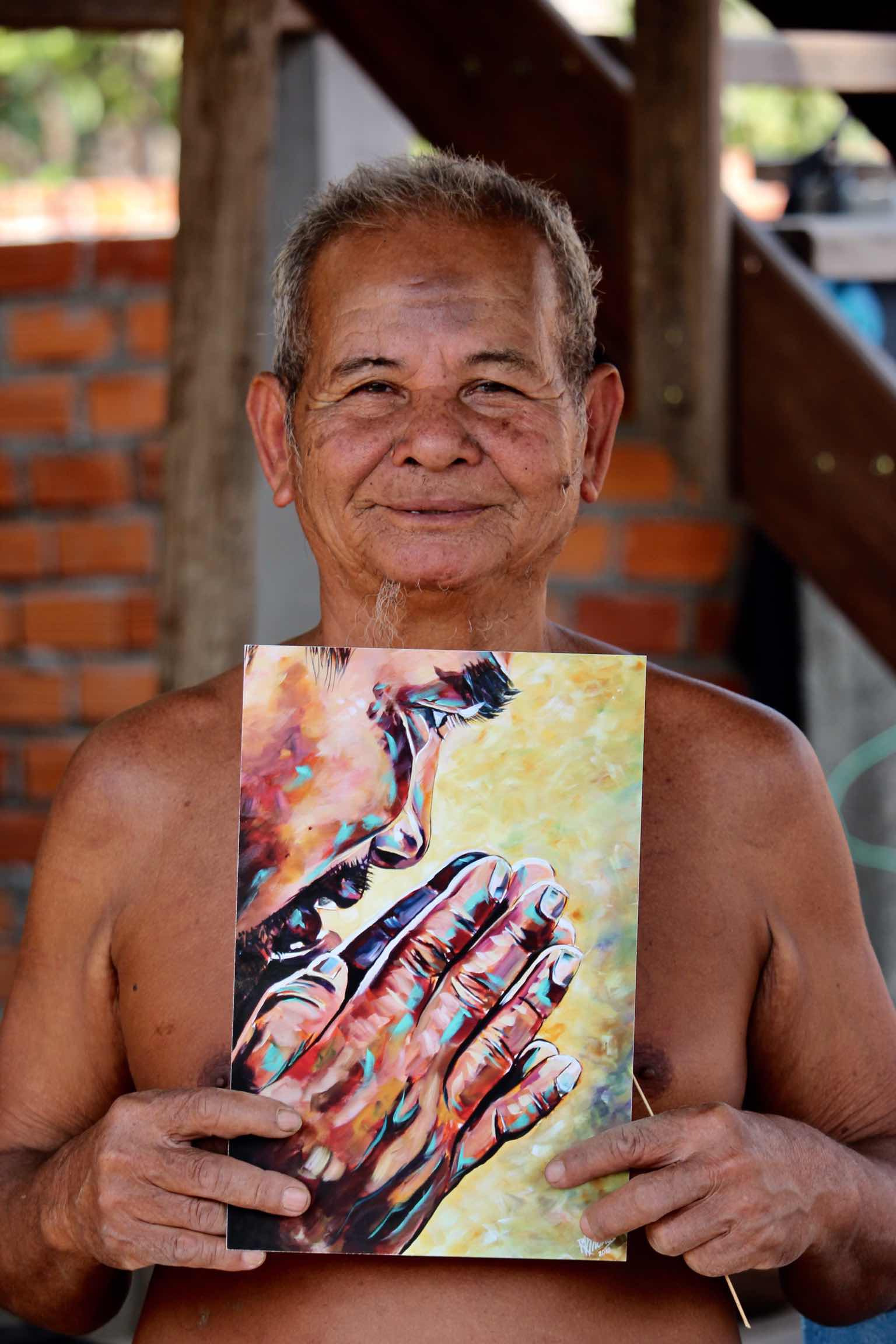 The only person that we didn’t find was Vav.  Apparently he was away for a few days.  However, we were able to connect with his dad, a very memorable guy with a long single strand beard, and present him with a fine art print of “Vav’s Prayer” to pass along. 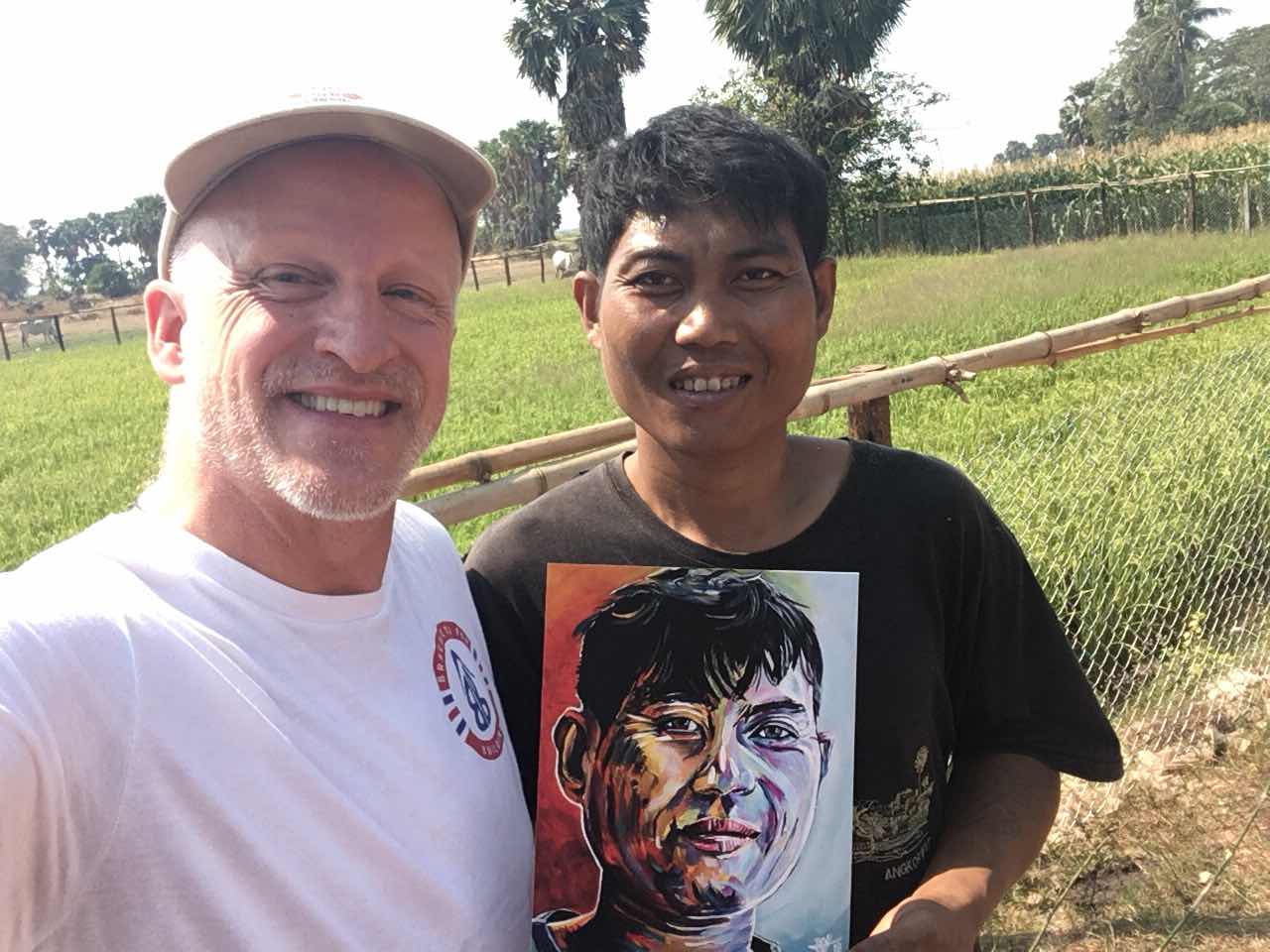 “Stop!” I yelled as we were driving away.  There, walking on the road, was Chat Tom.  We scrambled out of the car, gave hugs, and presented him with his portrait.  He let us know that his wife and two of three kids were at home and that we could stop in. 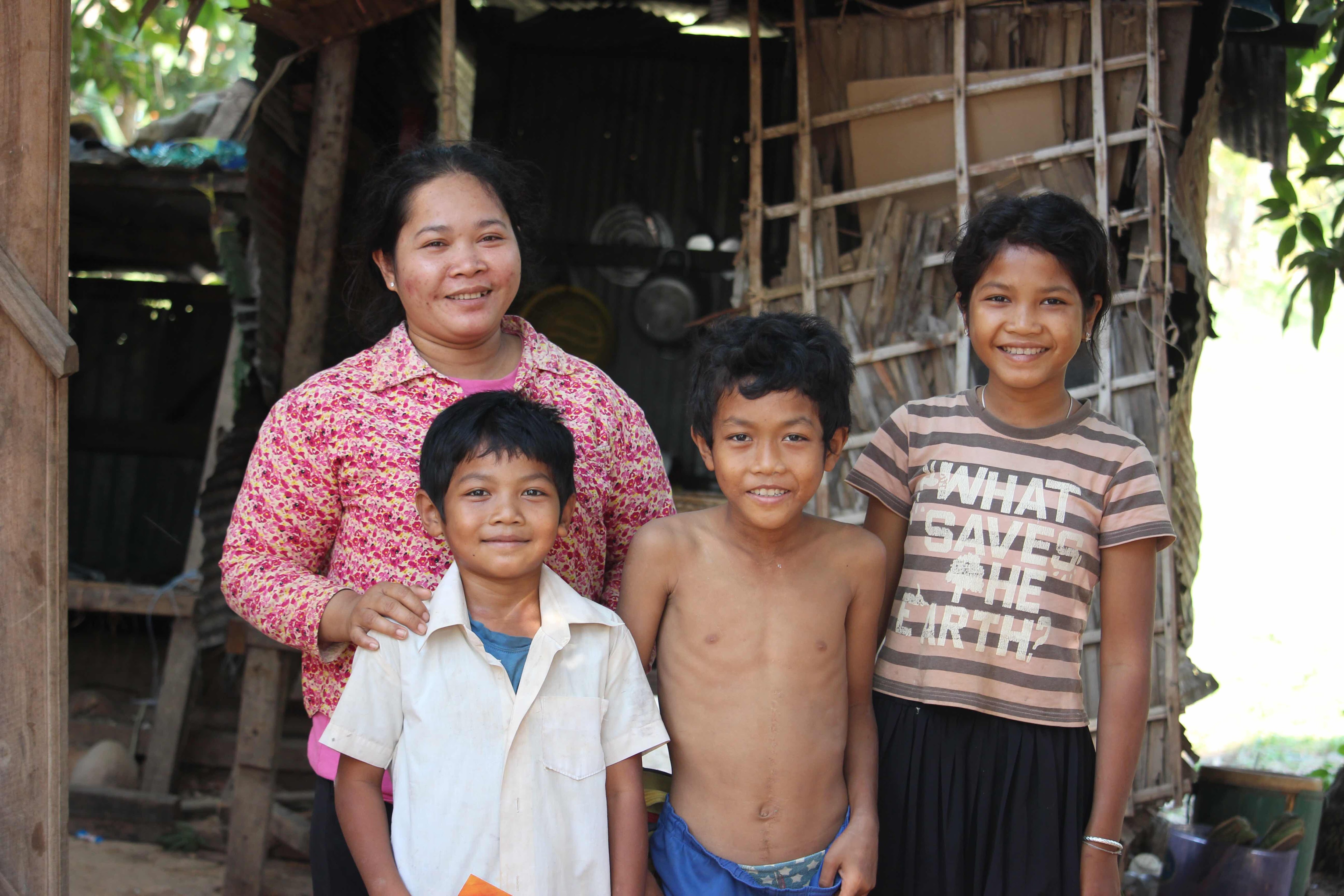 It was so nice to visit with Ann and the kids.  Their situation is so vastly different.  One year ago, they were surrounded by flood water living in a ramshackle shelter with no walls.  Now, Ann is working in a restaurant earning $100 per month.  We happened to catch her at home on her day off.  One look into their faces and you know life is good. 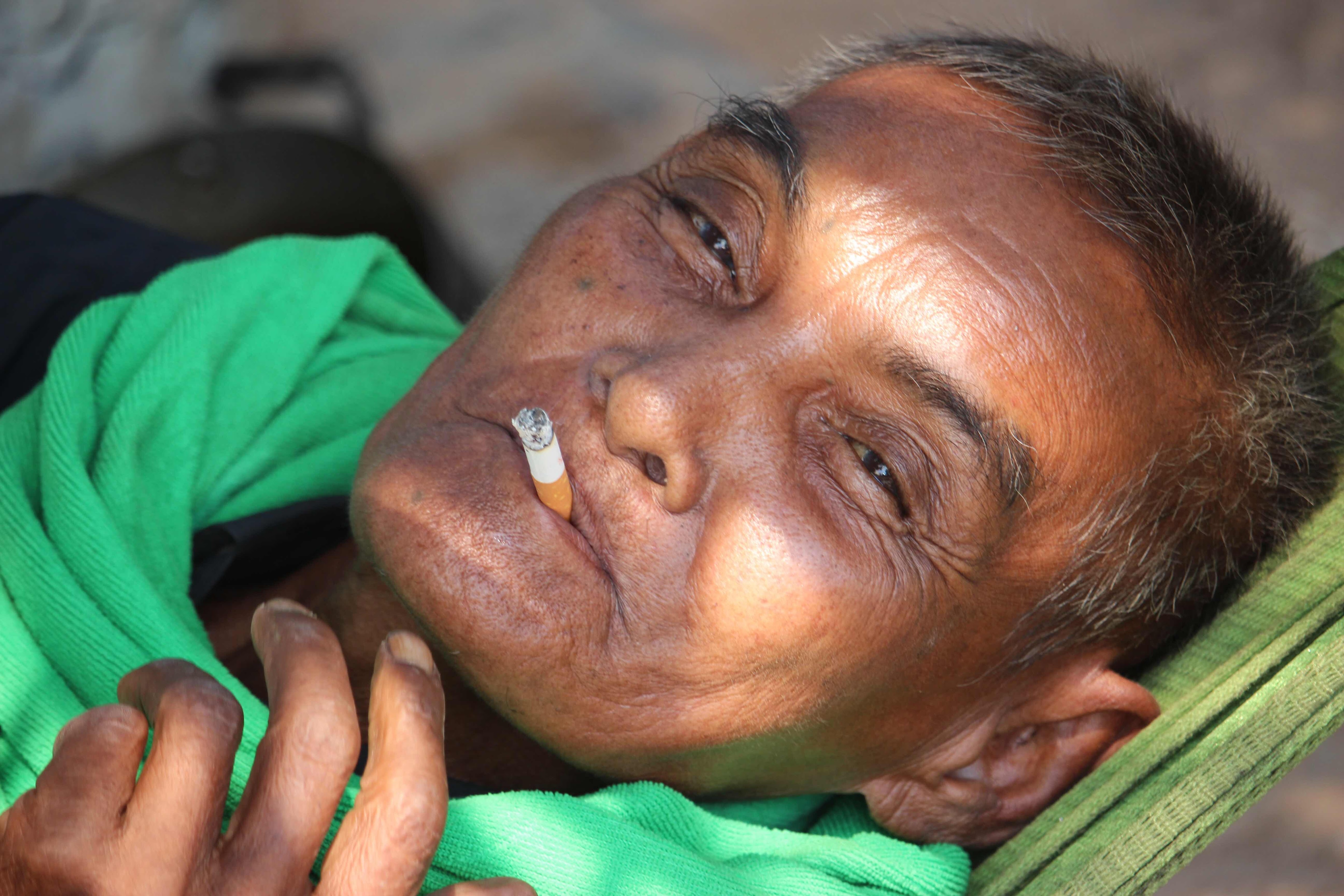 Tom’s dad was also there when we dropped by.  He was striking a familiar pose. Chat Chong is quite a character.  It was nice to see that sardonic smile once again.
We tried to find the monks that I had painted, but were unsuccessful.  We found one pair having their lunch in the shade.  The younger fellow appeared to start critiquing my portrait of the monk with glasses.  He seemed to be concerned that the fingers didn’t look quite right.  Ha ha ha.  Everyone’s a critic.  In the end, Ann offered to make sure the prints of the monk paintings find their way into the right hands.
One of our other objectives of the trip out to the village was to gift a young fellow named Seelowee with a soccer ball.  It turns out that he was in school in the morning, so we left the ball with Mern.  As we were about to leave the village, who did we see returning from school on his bicycle? 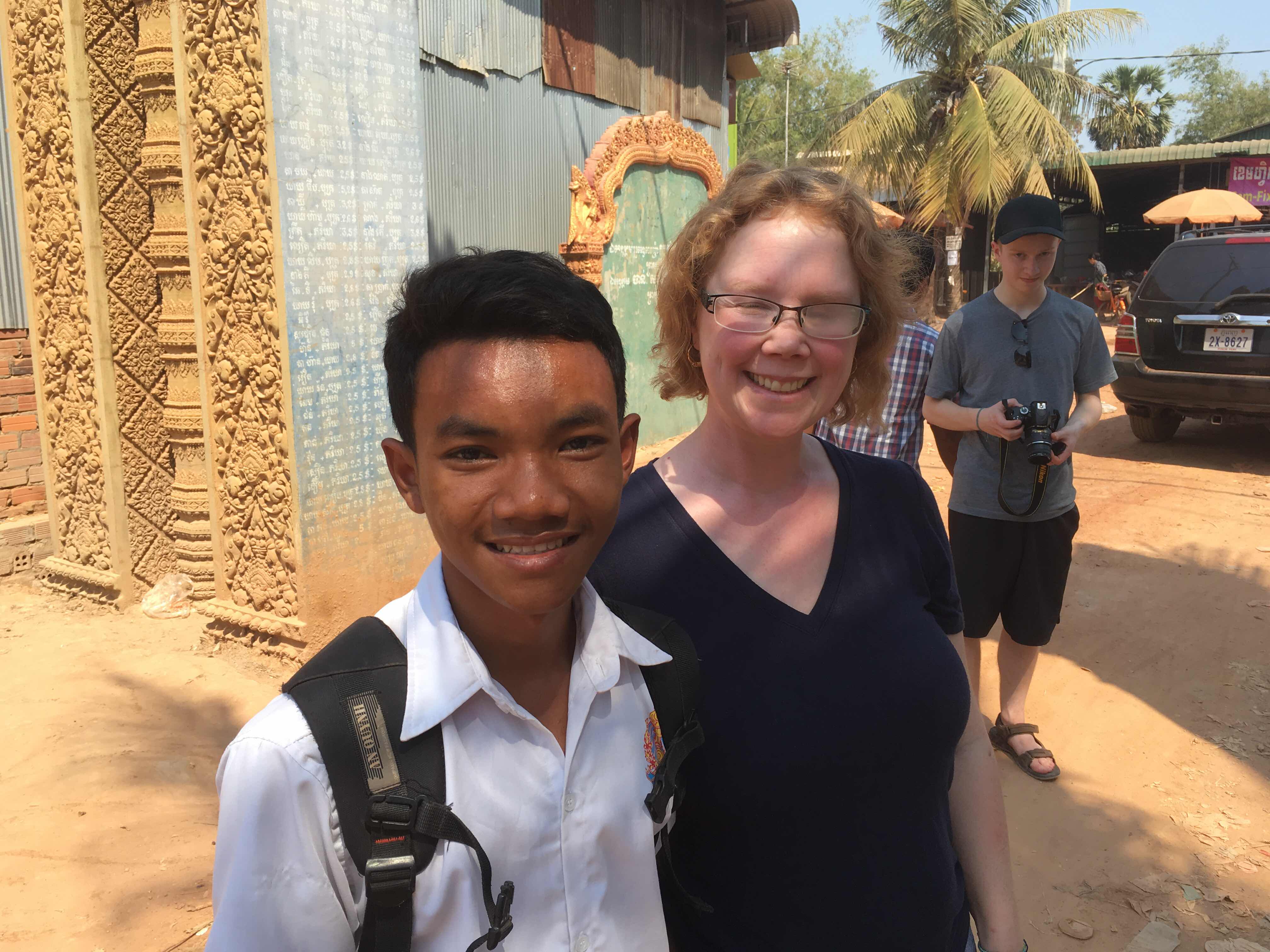 “Stop!” I yelled to the driver.  We hopped out of the car and called Seelowee over.  It was a short visit to let him know that we didn’t forget about his request for a ball. 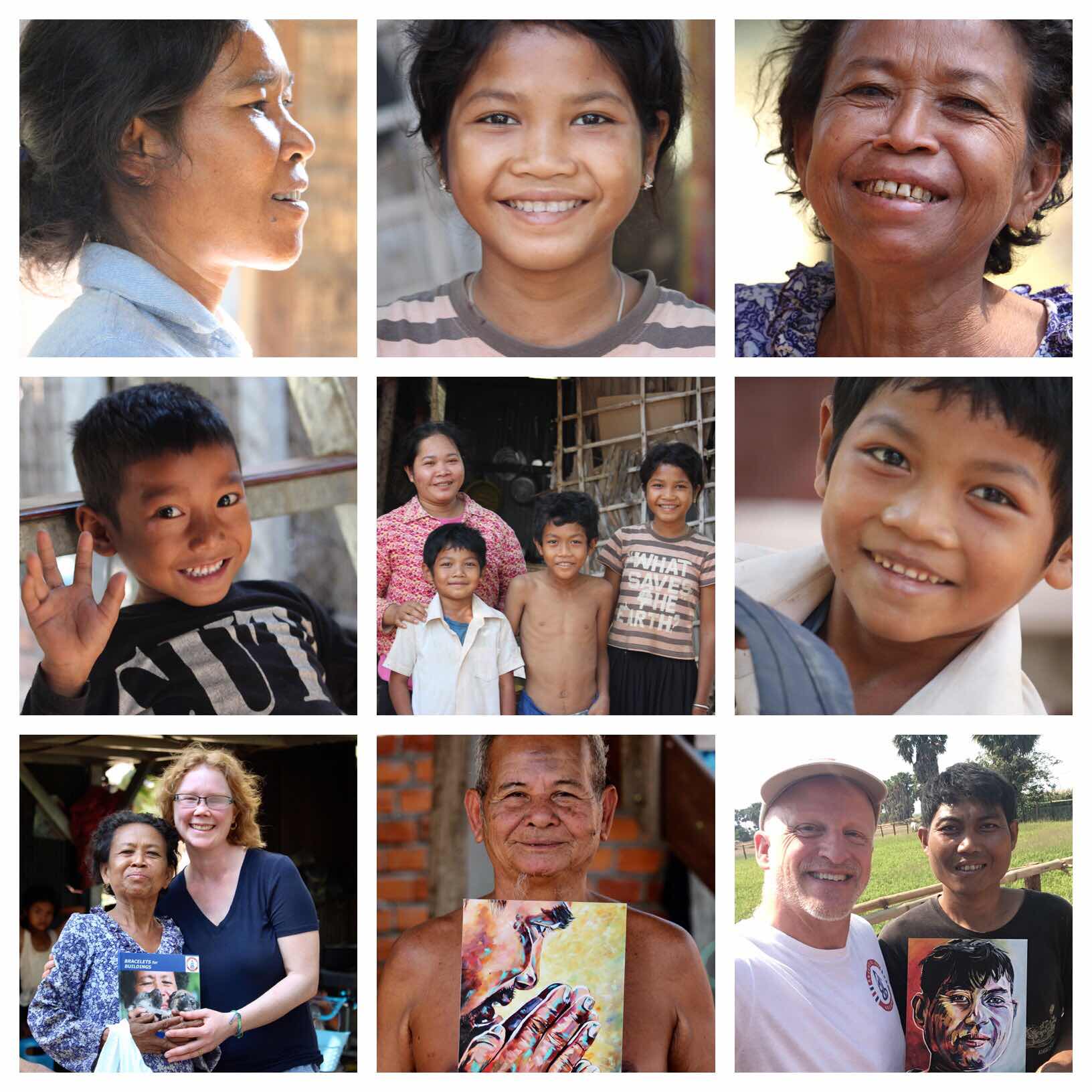 Many things are going to rattle through my brain remembering moments from this trip out to the village.  However, the overarching story is that Bracelets For Buildings and all the people who have contributed are making an impact, one family at a time.  The proof of impact can be found in the smiles.
Email Post