Subjects that reveal themselves


As I look back over five years of painting, there are many subjects, among over 1,100, that jumped up from my unconscious mind and quietly whispered to me:  "paint me!"  There are quite a few that spoke to me in this way.  Within my line of site sitting at my desk in Birdsong Studio in Okotoks, I can see several, including Frank Sinatra, Tony Bennett, George Bush and most recently, Miles Davis.

The question of how I pick my subjects has been asked countless times over the years.  The answer, while likely sounding a little airy fairy, is pretty simple.  Out of a desire to paint something fun, I take a breath and ask my body to show me what I'm meant to paint next.  It bounces back and forth between human and animal subjects, and it is greatly influenced by the commission project that came before.  It is informed by a longing for certain colours, textures, and shades of light and dark. 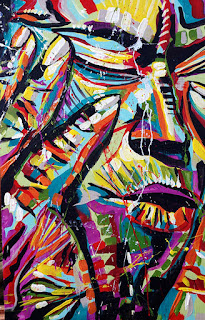 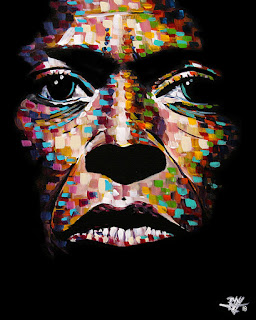 I have painted Miles Davis on several other occasions.  Arguably, one of the greatest jazz trumpeters of the previous century, he is as known for his unique physical appearance as he is for his music.  He had a look that greatly enhanced his stature as an artist.  I went looking for one of those expressions the other day and landed on one that had been tucked away in one of the storage folders deep in my brain. 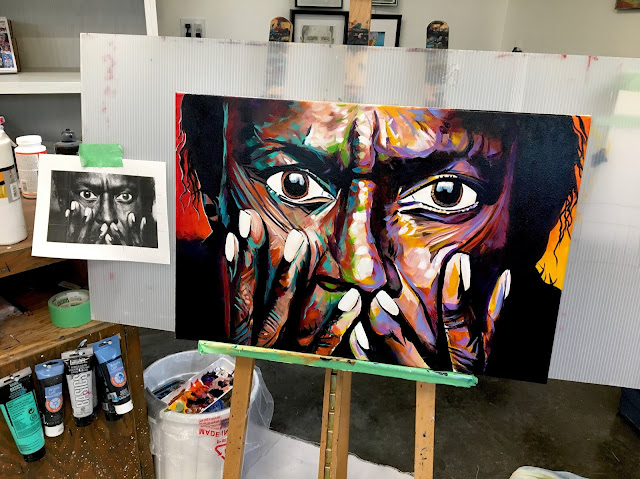 This painting is headed to the Detroit area to the home of a former colleague who purchased an Oscar Peterson portrait I did on an old album cover back in 2014. 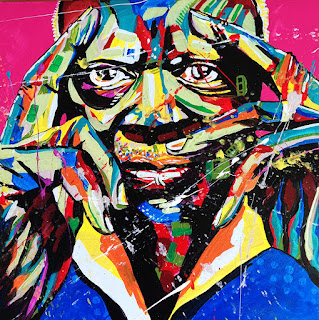 He'd be a good companion for Oscar, wrote Jason on my Russell Thomas Art Facebook page.  Oscar will have his companion sometime next week. 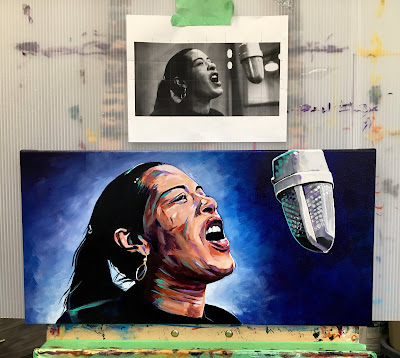 As we've been preparing for our open house, I've been thinking of themes in the studio.  The crooner section felt a little unfinished, which caused Billie Holiday to pop up in my head.  She would be a perfect addition to Tony Bennett and Frank Sinatra.

I spent most of yesterday bringing a very young and talented Lady Day out of the canvas.

I am convinced that the Universe is a partner in my creative journey.  It provides me everything that I need in terms of guidance, direction, suggestion and inspiration.   It's fun to image where it may lead me next.