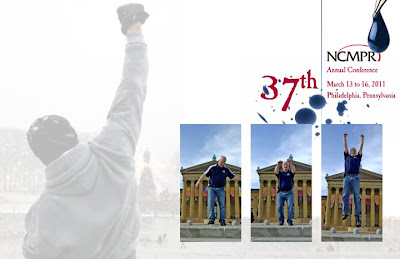 The 3rd day of the NCMPR conference didn't do it for me. There, I've said it. And outside of the ray of light offered by Ron Paradis's session To Infinity and Beyond: A Comprehensive Enrollment Management Plan, the other two sessions I went to somewhat fell flat.
As communicators I'm often surprised how often we struggle to communicate. We can learn so much from people like David Raymond, David Pogue, and Peter Shankman who have this incredible ability to light up a room. They get up in front of a room full of strangers and tell a compelling story that engages and challenges. We walk away feeling inspired and energized. The first couple of sessions yesterday left me feeling the exact opposite, tired and struggling to keep my eyes open.
That said, the active listening and constant tweeting may have been taking a toll. Maybe I had nothing left? Let's leave it at that and move on.
Renee and I went on an "epic" walk (that's the word of the week thanks to Mr. Sheen) from Penn's Landing all the way to the Philadelphia Museum of Art and back again, a distance of several miles, or at least 7 or 8 kilometres as we like to call them in Canada. 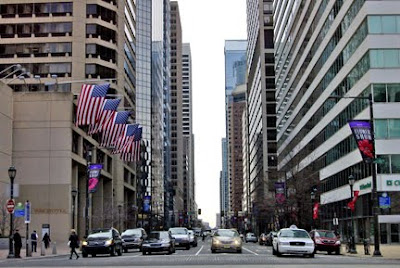 Our first stop was the Liberty Museum, thinking it may be the location of the famous bell, not having any idea where we were going.
"Is that the actual Liberty Bell," I asked as I pointed to the ringy dingy thing poised at the front of the museum.
"No, that's just a replica," she replied. "The real thing is around the corner." 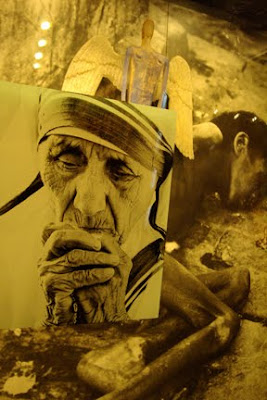 I was still glad we popped in as the Liberty Museum pays tribute to heroes from around the world who have fought and died in the pursuit of freedom, from the 9/11 responders to Mahatma Ghandi, from religious patriots like Mother Theresa to peace prize winners like Jimmy Carter. It was a powerful trip up and down four flights of stairs lined with portraits of all the fire fighters, police, and port authority personnel who shuffled off this mortal coil in the tragic events from that day that will live in infamy for our generation. 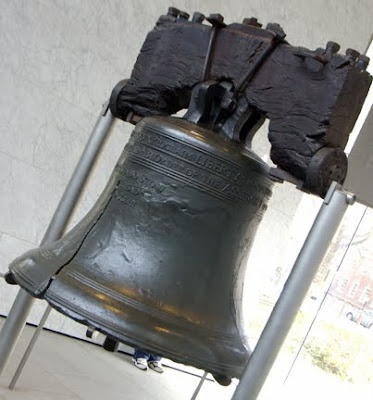 We eventually found the real Liberty Bell, just around the corner and up the block, displayed in a modern looking building just opposite Independence Hall. After we were pat down and searched we weaved our way to the far end of the building where the grand old girl was on display, warmed by the midday sun streaming in from the south through the floor to ceiling glass walls that make it feel like your outdoors. We came, we saw, we snapped, we left.
"That's one more tic off the bucket list," said Renee. 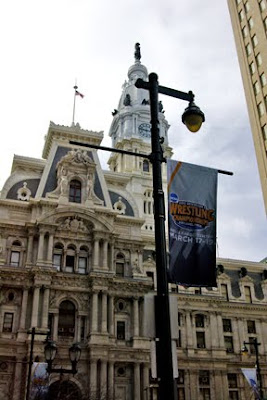 Ten blocks along and we were able to walk through the centre of the gargantuan City Hall. Punctuated by a tower 167-metres high. It was the tallest habitable building in the world for a glorious seven years at the turn of the previous century and has the distinction of being the second tallest masonry building anywhere still today. I got a distinctive shiver as we passed through a walkway that allows pedestrians trekking up Market Street to keep on going. It's an imposing structure, cold and calculating. The granite and brick walls are 22-feet in some places.
We veered off to the north in search of the Benjamin Franklin Parkway and the path to the Rocky Steps, otherwise known as the Philadelphia Museum of Art. We passed Logan Square, the Rodin Museum and found Eakins Oval, the busy piece of pavement just in front of one of the most famous set of steps in the modern world. 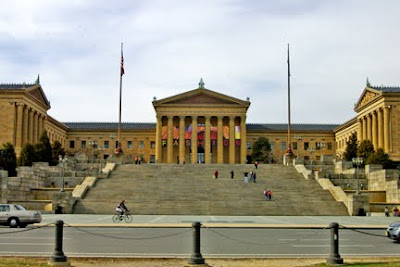 I'm not sure how famous these 72 steps would be if it were not for the 1976 film starring a then unknown Sylvester Stallone. Rocky found the sweet spot with a movie going public eager to cheer on the underdog. It spawned a franchise that went on and on, far too long frankly, and it made this entrance to an art museum an instant destination for millions of tourists traveling to the City of Brotherly Love (where, somebody noted, the grand old battleship, the USS New Jersey, stands watch out on the Delaware River).

We charged up the stairs, or perhaps gingerly walked might be a more accurate description, but either way we made it safe and sound with our lungs fully intact to the very top where Rocky's bronzed feet, embedded in the concrete dead centre, stand watch over an incredible view of the Philadelphia skyline. 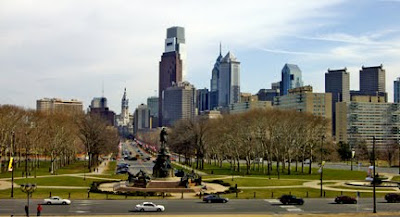 And after all the effort and excursion, we didn't feel silly at all jumping in the air and pretending that we were Mr. Balboa. 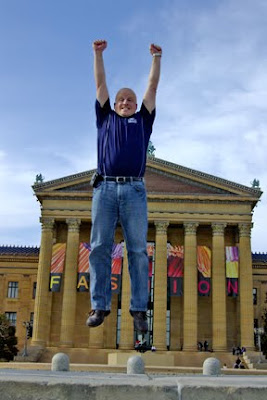 It was a lovely walk and a great way to get an up close and personal feel for this great city. The architecture is incredible, the people friendly, and the street layout envisioned by William Penn easy as pie, or philly cheese steak, to navigate.
Renee went off to the Paragon Awards Banquet while I dived into a marathon conference call, remotely attending a five hour Council meeting happening back in Fort McMurray.
As I listen to the 30th Anniversary edition soundtrack of Rocky and recall jumping high up in the air at the top of the steps, I'm ready to seize the final day of the 2011 NCMPR national conference.
Email Post