Putting the Sheen on dubious denial 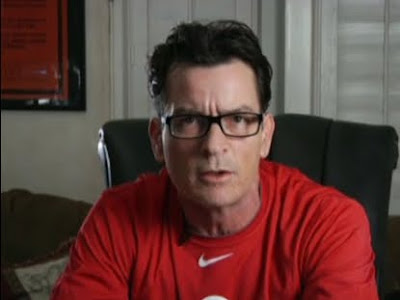 Charlie Sheen is one messed up dude. Are you with me on this? Don't believe me, take a few minutes to watch this collection of clips from recent interviews:
I showed one complete interview (from ABC) to my 12 year old son Dylan who clearly saw the disturbed individual that lay under the veneer of being "radical" and "epic".
While his dysfunction is as clear as the nose on my face, despite what he says, I don't feel sorry for him. He is on his own personal journey with an ending yet to be determined. That said, I feel intensely sorry for those close to him - his children mostly, but also his father (Martin Sheen) and brothers (including actor Emilio Estevez).
Purporting to be "clean" and reformed for life, Sheen expresses no remorse for his behavior or his out-of-control proclivities. Instead, he is proud of his partying prowess and thinks he should be celebrated for showing people the time of their lives.
Other famous actors have been down this road and are no longer with us. Coming to mind are John Candy, John Belushi, Chris Farley and Heath Ledger, though there are many others - all died way too young.
Money, fame, and power can create a deadly cocktail. Charlie Sheen has had plenty of all three earning millions per episode of Two and a Half Men and amassing a resume of movie blockbusters that had him on the A-List for the better part of a decade, from Platoon to Wall Street. He possessed an uncanny ability to mix uncommon looks with unmatched comic timing, which turned him into a sitcom star that attracted (and continues to attract) an audience hungry for what he had to dish out.
As his family looks on, Sheen is ubiquitous across all media channels, on television, websites and most recently on Twitter. He is decidedly fidgety, unsettled, and unsettling. How is he really doing?
"Winning," he insists.
"Manic," say many; "Bi-Polar," say others.
From the outside looking in I would say that Mr. Sheen is hovering on the edge of the blade and in a state of dubious denial. As with all addicts, I wish him Godspeed, and hope he finds a way out of the abyss.
Email Post