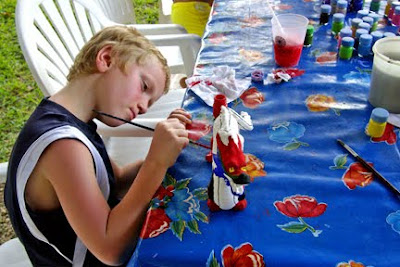 Ben was intrigued with the idea of painting a ceramic dragon the other day, with a vendor situated along side the main pool at Sandos Playacar in the shade of a couple of big trees. Among his list of happy places is being in front of an art project with brush in hand. I guess w'e're similar that way as I rose to the opportunity and spent 2.5 hours adding colour to a serving plate. Estelle, the Mexican vendor, paints the patterns with a thin brush and black paint after having put down a base coat of white. We get to choose from a vast selection of colours to fill in the pattens. She takes the pieces home for glazing and firing, then brings them back the following day, good to go.

At a price of about $60 for the two items, I thought it was a good use of money and a brilliant use of time. Unfortunately, I was a little under the gun for time as she was wrapping up by 5 pm; I could have spent several more hours in that comfortable shade adding detail. 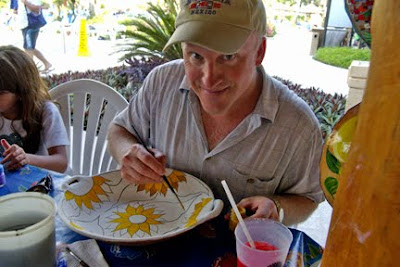 It's interesting what each of us has discovered as our own personal space on this holiday adventure. Heather has enjoyed a number of yoga classes along the beach, checking her email on one of only a few computers available to members, and reading. I've loved my daily ritual of writing and checking into the world a couple of times a day (glancing at Facebook and Twitter for the latest updates, and CNN for the latest oil price) via the iPad. Dylan and Ben are happy spend the quiet times with each other in their room, goofing around or watching TV-though I suspect Dylan is reaching that age where alone time, wherever spent, is prescious.

We'll need some additional peace and quiet time today, both in preparation for tomorrow's long flight home and in reparation for yesterday's trip to Tulum and Xel-Ha. 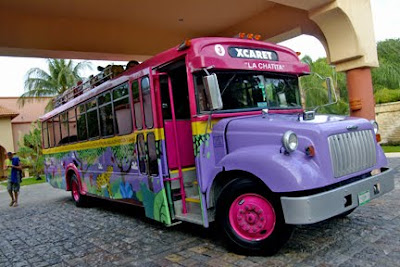 We took the colourful Experiencias Xcaret bus, first to drop off the bulk of the passenger at Xel-Ha, then on to Tulum, about 20 kilometres down the highway. Certainly one of the great wonders of the world, Tulum is an amazing heritage site and home to one of the most important Mayan cities. Overtaken by jungle after the collapse of the Mayan society after the arrival of the Spanish, the ruins were discovered relatively intact, though pillaged, in about 1840. What remains today is several administrative buildings and the main religious temple, about 80 percent intact, along with remnants of the city walls and many foundations of residences.

On a side note, because it deserves highlighting, the Mayan are primarily responsible for the concern and consternation around fears of the apocalypse coming on December 21, 2012. They of course were one of only a handful of ancient peoples who successfully created and maintained a complete written language. One document was found with previously unseen hieroglyphs and a subsequent unknown message about the date that aligns with that fateful day next winter. Pablo, our Mayan guide, suggested that the notation probably indicates the end of one cycle and the beginning of another. 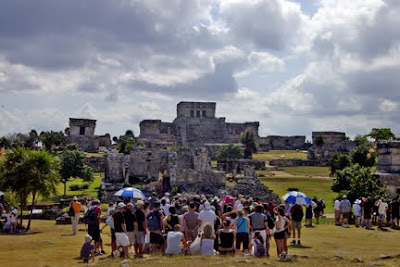 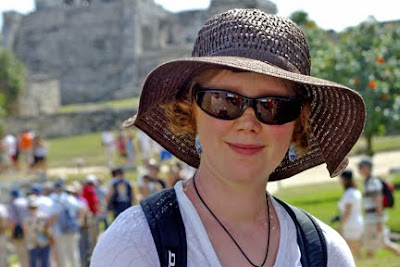 It was monstrously hot as we meandered through the ruins, finding small circles of spattered shade under trees carefully planted to allow a large number of tours to go through concurrently. For Dylan, it was a particularly tough morning, as the ground was very uneven and he does not have the interest in ancient things like his younger brother. We planted him in a shady spot while we made the final hike to the top of the temple and the stunning view of the ocean and beach nestled at the bottom of the 12-metre high rock cliff. 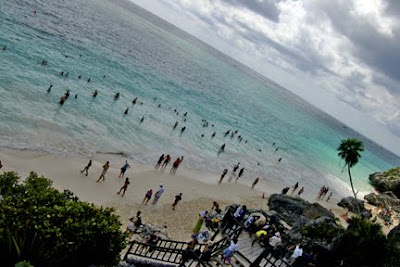 From Tulum we went back to Xel-Ha for the remainder of the day. A stunning collection of inlets, lagoons, cenotes and caves with water teeming with life, Xel-Ha is certainly one of the top attractions in the Mayan Riviera area. Equipped with snorkel gear, we hit the water as a family and explored for several hours. The most interesting spots were near the shore where the many species of fish could be found near the protection of rocks and reefs. Both boys did exceptionally well after we got their gear put on right.

"Papa, I lost a flipper," screamed Ben, as I made a desperate lunge to grab it before it sunk too deep. I missed it by inches as I dove down, impaired by the buoyant lifejacket.

I helped him to the shore, shucked off the jacket and dived back in, hoping we hadn't blown our deposit. I spied it through the diving mask and went down about 15-feet where I snagged if off the ocean floor, thankfully standing straight up making the recovery much easier.

While Ben and I continued exploring the lagoon, Heather and Dylan went off to Sea-Trek, a 30-minute ocean walking excursion and a chance to pet stingrays and groupers. Dylan was totally stoked about the idea (as the picture I will post when we get home will testify) and enjoyed donning the 60-pound underwater headgear, exploring the ocean floor.

I say "ocean" when, in fact, the water is a mixture of both salt and freshwater, providing a thriving and completely unique marine environment.

By the time we loaded back onto the Experiencias Xcaret bus we were pooped. The sun sets on a dime in this part of the world and by the time we rolled out of the parking lot at Xel-Ha, it was pretty much dark; twilight in Mexico is fleeting, as is our time in this glorious place.
Email Post