Sea swells and going over the edge 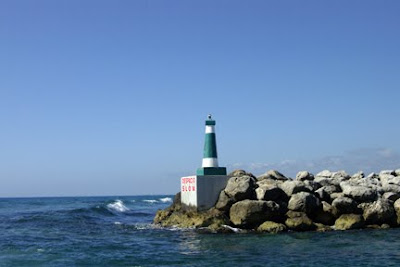 Let me say right off the get-go that the fishing trip was not as I had imagined. Long ago and far away, I got it into my head that I needed to treat myself to some ocean fishing, some way and some how on this Mexican holiday. On our first day I booked a half-day excursion with Captain Rick's, one of many fishing adventure companies who capitalize on every ounce of tourist currency that pours itself into the Mayan Riviera.

In my defense, I had not been feeling very well the day before, sensing a twist in my digestive system for most of the day and battling through a fever for most of the night. Bound and determined to go fishing, I roused myself early in the morning, ate a sparse breakfast and made my way to the Meeting Point, a second lobby where resort patrons can rendez-vous or get picked up for tours.

We crammed into a 10-person passenger and made our way south of Playa del Carmen, past Explor, an adventure-oriented theme park, to a marina community and home base of Captain Rick's Sportfishing Center. As we closed in on 9 am there were probably 50 anxious anglers ready to hit the high seas.

Pick any province or state in Canada or the U.S. and you'd be filling out forms up the wazoo at this point the process, and paying through the nose for a license. In Mexico, you give them your name and home address, "so we know where to send the body if anything happens," said the lady at the front desk smiling and ushering through the last of us so we could get underway.

They split us up, five "bodies" to a boat, some in pre-arranged groups, others just singles like me out for a day on the water. I ended up with two guys from Wisconsin and two from Michigan, all in the manufacturing business at some level or another-two in automotives and two working for Polaris making snowmobiles and ATVs.

We walked the gang plank onto the craft. At high tide, the board was virtually parallel to the edge of the boat (we would have to scale the same plank just four hours later as we docked at low tide). 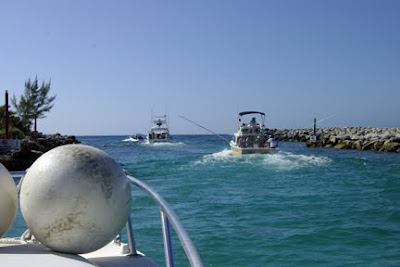 Of course, in my mind I was going to be stationed in front of a fishing rod the whole trip. This is where I was completely wrong. Instead, our place was in the bow of the boat while the ship's mate got all the rods set, baited and ready. As soon as we broke free of the marina channel and entered deeper water he put out the lines, five of them sitting in different positions and depths. I quickly realized that our job was to occupy ourselves, getting brow beaten by the raging sun, waiting for something to hit on one of the lines.

"This is a whole lot of waiting around for something to happen," I said, feeling like the obvious needed to be stated. 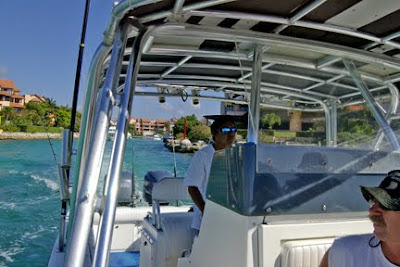 At first, I quite enjoyed watching all five rod tips to look for any sign of movement. It felt like I was back at the mouth of the Snye with all my pickerel rig fishing buddies.

Ivan from Michigan was the first to go over the edge, a spot he frequented several times on our journey. He had taken some medication in hopes of overcoming his propensity to motion sickness, but was completely unsuccessful. He spent most of the trip trying to find a place and a position to sit that would offer some semblance of digestive peace.

Circling back and forth up the coast for 2.5 hours, absolutely nothing was happening so the decision was to move from trolling to bottom fishing. I shuffled to the stern and was the first to get line in the water with a medium-sized hook impaled with a piece of fish meat. Letting out the line manually till it found bottom, we were essentially jigging, searching for the smaller species who reside on the ocean floor.

This is the point in the story where I realized there is a vast difference between the impact on the body from the sea swells on the stern compared to the bow. My stomach started to spin as I handed the rod off to one of my compatriots and sought solace at the back of the boat in the one spot that offered a modicum of shade. The damage was done, as the nausea induced from my time in the front had rooted itself in my gut, and I went over the edge, emptying the sparse contents of my stomach.

Honestly, I don't know if I experienced a legitimate case of sea sickness, or if I had finally succumbed to whatever bug had hit me the day before, but I was done with my fishing adventures at that point. I closed my eyes, sweating from the excursion and discomfort, and nestled in the shady spot while the rest of the guys closed out the remainder of the trip trying their hand at bottom fishing. In the end, my understanding is that three small fish came up, though I didn't have the interest or resolve to turn my body around to have a look.

I remained nauseous right up to the moment the van let us off back at the meeting point of Sandos Playacar. Following the short walk back to our room, the world started to feel right again. I gave the 10 second synopsis of what happened to Heather and the boys (all anxious to hear about my thrill of a lifetime), pulled back the blanket and sheets, took a small hit of water, and curled up in the fetal position and shuffled off this mortal coil for a brief therapeutic nap.

Despite being skunked, getting sick, and sun burned, I have no regrets about my inaugural deep sea fishing adventure. I now understand how it works, so when I decide to try it again, I'll have a better sense of what I'm getting myself into. I also trust that I could better handle the sun and the swells in good health.

That's my fishless story and I'm sticking to it.
Email Post