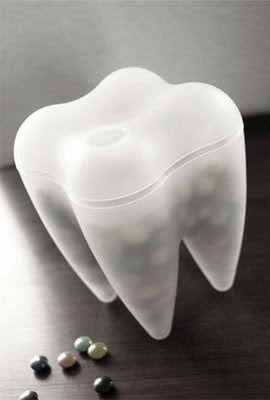 I ambled into the dentist's office at 7 am yesterday, my preferred time for my bi-annual visits to Dr. Beaulne. The difference this time around was that he planned to yank my remaining wisdom tooth.
Going back 15 or 20 years, they pulled the first two, pumping me full of pain killers - 17 needles into the various places in my face. The third one said goodbye a few years ago, relatively painless and quick.
Over the years, medical technology changes, and while a visit to the dentist once meant at least a handful of grimaces and a smattering of pain, today it's a walk in the park. Swab, swab, poke, poke, pull, pull, and it was done. All that was left was the hole in my gums and a gargantuan molar bouncing around in a yellow plastic tooth carrier.
I spent the morning in virtual silence unable to speak clearly with most of my mouth and lower part of the face completely frozen and a hunk of gauze squeezed between my uppers and lowers. So, I cloistered myself behind my desk, ignored the phone, and plugged away at my inbox which had become rather unruly with over 750 guests. By the time feeling returned and I was able to begin normal operating procedures, the email count had dropped to a manageable 125.
The boys were pretty impressed when I came home and opened the yellow plastic tooth carrier to reveal the seasoned and majestic tooth. I even offered to give it to Ben to put under his pillow. He looked wary, shook his head and said "No thanks! You can't lie to the Tooth Fairy."
Email Post