All Shook Up dazzles 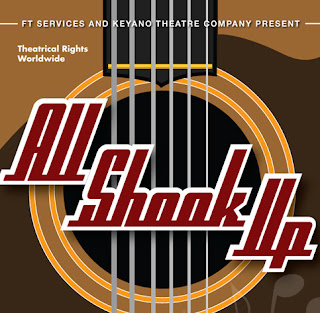 In watching the social mediasphere over the past several weeks two things were clear:  first, that the cast and crew of Keyano Theatre Company's production of ALL SHOOK UP were having a blast, and second, that uniformly positive comments were being posted by patrons.  Don't get me wrong, this is not a new phenomenon, positive things get tossed around during every production, but there was something in the words that led me to believe that this show was going to be extra special.  The closing night performance did not disappoint, in fact, it took a quantum leap over my lofty expectations. The WOW FACTOR in last night's performance, for me, was the strength of the ensemble effort.  And when I say "ensemble" I include all the souls, artistic and otherwise, who worked in concert to make the magic happen.  From the techs who laboured furiously behind the scenes to install body microphones to the volunteers on the flys,  making multiple transitions happen seamlessly; from the fantastic dressers in the wings who got their actors ready on cue to the stage crew folks who moved the set pieces in and out without interrupting the pacing of the story - this was a group of artists, volunteers and professionals whose hearts were beating as one. 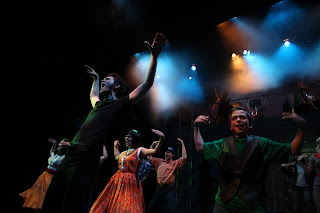 When there are a lot of people on stage I love watching the actors who are creating the patina of the scene, the ones slightly removed from the spotlight.  In this case, I can go back in time in my head 12 hours ago, and see clearly Misty being completely engaged in the moment, Julien plying his extraordinary dance skills while remaining entirely rooted in the story, and Norm being utterly silent but absolutely compelling.  This was one of the strongest ensembles that I've seen in a long, long time. 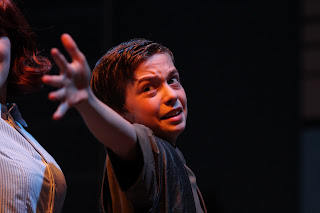 Jessica Sutton was an absolute star.  There, I've said it.  Wow!  Not only was her singing voice resonant, clear and perfect, she was completely believable as Natalie (and Ed) from the first moment to the last, rooted to the stage and to her character.  Jeff Hoffman delivered a standout performance as her roustabout love interest, the Elvisesque character who re-injects the town and its residents with long dormant passion.

I love to be surprised when I go to the theatre and ALL SHOOK UP offered up several delights that made the experience unforgettable.  This was my first chance to see Rachel So on stage.  Talk about a triple threat; she was extraordinary as Lorraine.  Salvatore Ferrara, also a fresh face to our community from Grant MacEwan University, did an amazing turn matching her captivating energy and enormous stage presence in the role of Dean Hyde, the son of the autocratic and repressed Mayor Matilda, brilliantly played by Ruth Francoeur (Citizen Ruth). 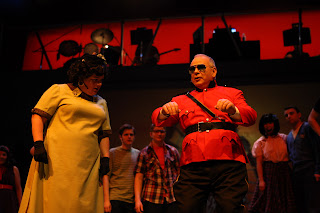 ALL SHOOK UP was directed by my good friend Claude Giroux, who we plucked out of the Allenberry Playhouse in Pennsylvania to become Executive Director of Events Wood Buffalo.  A veteran director, Claude delivered one of the finest musicals that we've seen in Fort McMurray.  He didn't do it alone.  He had a crack artistic team that rose to the challenge of closing out the 2010-2011 season with a bang:  Monica Baczuk - Music Director, Kim Hurley - Choreographer, Stacey Beach - Set and Costume Designer, and Adam Parboosingh - Lighting Designer.  Calling the show behind the scenes was Stage Manager Lauren Thomas, with assistance from Angela Fenton and Melissa Kontuk.

What else did I love about ALL SHOOK UP?

The way this large cast moved was unlike anything I've seen before.  Punctuated by some of the most accomplished dancers in Fort McMurray - Julien Naud, Makayla Farrell, Jennifer Lynch, Jayna McMillan, Nicole McMillan, and Kennedy Marshall - Choreographer Kim Hurley (Generation Dance Studio) did an incredible job with ALL SHOOK UP.

From a technical perspective, it was so nice to be able to hear everyone and every thing.  The audio mixing was exceptional, and I can't remember when I've sat through an entire show without at least a few mic problems.

There is nothing more wonderful than when a large ensemble of voices sing with full-voice and full-intention.  I loved it.  When the 27-member cast opened up their throats and let loose, it was stunning.

ALL SHOOK UP was good old fashioned fun, and we were swept up in the joy that was happening on the stage.  It was an intoxicating feeling.

Congratulations to Theatre & Arts Centre Director Alan Roberts and his entire team for a successful run of ALL SHOOK UP.  I'm so stoke about next season's line-up - including The 39 Steps, Macbeth, Chicago, and The Farnsworth Invention - and encourage everyone to purchase their season subscription to ensure that you don't miss a moment of the fun.
Email Post