KISS sells out in 1440 seconds

I had popped into the liquor store to grab some beer when I thought to ask the twenty-something cashier his thoughts on THE HOTTEST SHOW ON EARTH, the Canada ROCKS 2011 headline show on July 2nd in Fort McMurray.

"As a young person, what do you think about the KISS thing coming to town?" I asked.

"Everyone's talking about it," he said.

That was a crystallizing moment for me, as it illustrated that KISS penetrates into the younger demographics far deeper than I could have hoped.  Paul Stanley said in a recent interview on Good Day NY that their tours are bigger than they were during their heyday in the 1970s.


Paul Stanley of KISS: MyFoxNY.com
Tickets went on sale at exactly 12 noon on Friday, May 6.  A line-up had started late the night before at MacDonald Island Park.  Some tried to phone in while the rest of us attempted to navigate the online ticket buying interface. 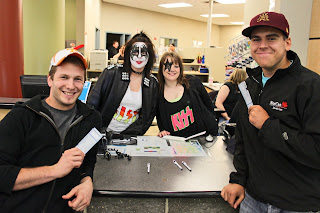 The fellows at the front of the line show-off their tickets to
THE HOTTEST SHOW ON EARTH
I couldn't even get into the MacDonald Island Park website for the first couple of minutes, all that would show up was an error message.  At first, I thought the volume of visitors had crashed the site, but an insider at Mac Island assured me that all was well and to "keep trying!" 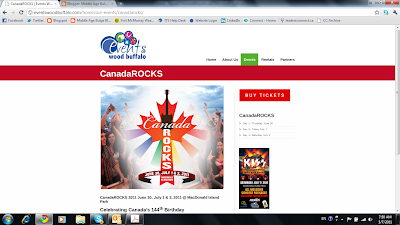 In the end I jumped over to the Events Wood Buffalo website to try the BUY TICKETS button there.  It worked!

I signed myself up, providing my personal and credit card information, and began selecting my tickets.   Something went wrong several times as the system timed out and I had to go out and start again.  With only a smattering of tickets remaining I managed to secure the seats I needed.  Whew!  My heart was racing and I had sweat on my brow.

"Sell out in 24 minutes," wrote Executive Director Claude Giroux in a text message that came over just a few minutes after I had printed out my ticket confirmation.

As an organizer there are two perspectives to an entertainment event that sells out in 1440 seconds.  First, there is the good news that you've reached your economic target and that the show will end up on the positive side of the balance sheet.  Second, there is the wish that you could wave your magic wand and make room for everyone else who didn't get tickets.  Sadly, our ability to do that is limited by the safety protocols that are established for the venue by the Fire Marshall. 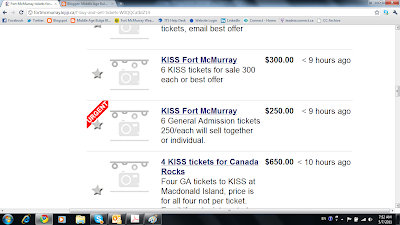 Tickets started appearing on Kijiji moments after the show was sold out, the initial offering of pairs of tickets marked up to $500.  I'm sure there must be laws against profiteering on things like this, though I assume enforcement would be next to impossible.

KISS is the first mega city stadium act to come to Fort McMurray.  It's obvious to me that there is a pent up demand for this level of entertainment and that THE HOTTEST SHOW ON EARTH is the first of many to come as our community and region continues to grow.
Email Post