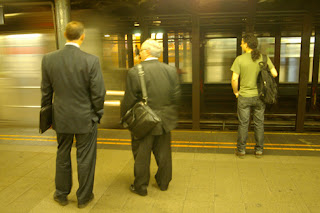 People that live in New York City are way less likely to have a car than those of us that live in smaller centres. They rely on the tentacle reach of the subway system to get within a convenient couple of blocks of where they want to go. You gotta know what you're doing, because one missed station and you could find yourself 20 blocks off your target destination. It's accessible (small staircases that descend into the multi-layered system of trains are everywhere), affordable (only $2.25 to get in and on) and well-maintained. And yesterday, there was no difference in usage between 6 pm and 12:30 am, the trains were packed at both disparate times. 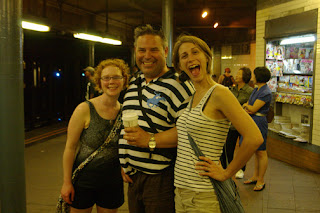 New York City has an energy to it, unlike any other city that I've visited. It is truly remarkable how alive it is, 24-7. We left the Imperial Theatre at about 10:30 pm, after enjoying Billy Elliot The Musical, and found ourselves in Times Square and on sidewalks crammed with people, shoulder to shoulder. Being Fleet Week, servicemen and women were scattered amongst the crowd, which led me to imagine what this stretch of excitement must have been like back on the day they shot Bin Laden, or at the end of WWII. 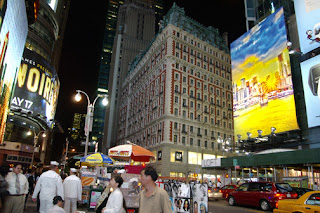 It was another full day for us, starting off with a warm walk through Central Park and up the street that borders its east side to the Metropolitan Museum of Art. A mammoth building, it would take a month of Sundays to fully experience its many nooks and crannys. We focused on a couple of exhibit areas including one that featured works by the great impressionists and another that featured an incredible collection of weapons: old pistols and rifles, swords, and suits of armour. Ben would have been in his glory seeing the intricate designs and variety of weapons of historical destruction. 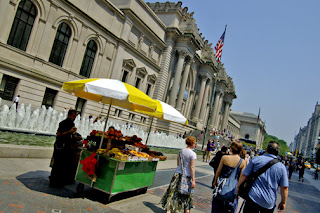 We met up with Alex at a French restaurant not far from the hotel for a pre-show feast of food. Alex is a professional actor and handyman/mason extraordinaire who lives in Brooklyn, but was in Fort McMurray last year for multiple weeks getting ready to perform DNA and the Dancing Fool at interPLAY. He had just returned from a regional production in Cincinatti.

As he arrived and started dishing out hugs all the way around, I lurched up to offer my welcome while taking our tightly packed table with me and sending my martini flying. And despite the fact that after drinking its replacement I was feeling a little loopy, I enjoyed hearing Alex's many stories of life as an actor, of living in the great city of New York, and of having a Minnesotan mother who once ran with the same crowd as a post-pubescent Bob Dylan. 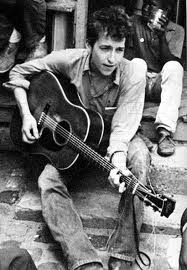 This was another surprising interlude of Alex's mom's life that popped out of the past only recently as they had walked by her old apartment building as it was being torn down. On the street was a dumpster, with a door sticking out of the top of the pile. She glanced up and said to Alex, "That was Bobby's door."

"Bobby who?" asked Alex, which is how he discovered the one degree of separation between himself and one of the great icons of American music. 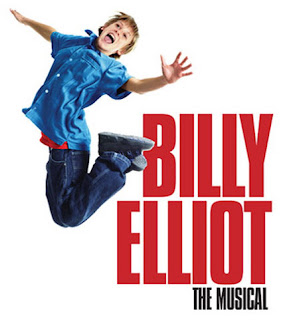 We sat in a jazz club in Greenwich Village late into the night, winding down after the David Furnish production of Billy Elliot, starring the venerable Emily Skinner and young Joseph Harrington, rotating the lead role with three other actors. 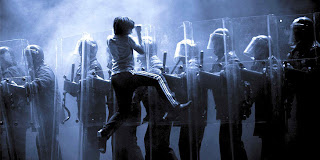 Alex gave us a further glimpse into the interesting life of a 40 year old actor and what it's like seeing many of his contemporaries and colleagues up in lights on Broadway, featuring in the next big TV show or sitcom. He once played in Julius Caesar with Lance Reddick who played Chief Daniels in The Wire, a wonderful series that Heather and I watched from start to finish just a couple of months ago. Alex played Marc Antony's servant, Reddick played Marc Antony. The production was pretty awful, but it forged a friendship that continues to the present as Alex struggles to not starve as an actor while Lance makes $150,000 per episode as one opportunity TV follows another. 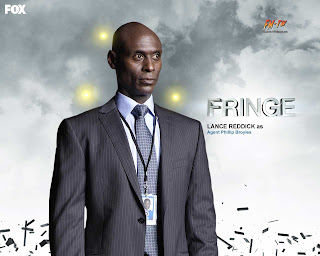 Standing in the packed subway car, reaching up to hold the bar to stop myself from plowing into the group in front of me as we made our way back to the 50th Street stop, I couldn't help but marvel at how busy it was, that if I were oblivious to time, the scene in front of me would offer no clues as to the time of day. This city never sleeps, nor do the subway trains. 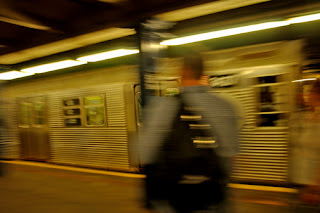