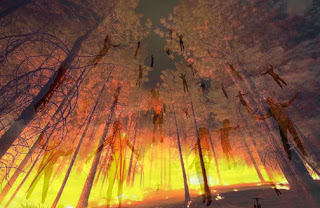 The smoke is so thick in Fort McMurray this morning that I can barely see the hills across the Clearwater River. If you were living in a bubble and anticipating the rapture that is supposed to happen today prophesied by tele-vangelist Harold Camping, you might wonder if it had started by looking outside. 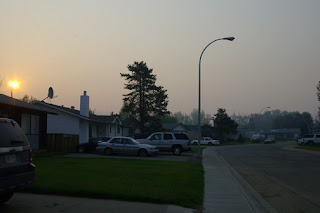 We have been experiencing an unseasonably hot and dry May, temperatures hovering between 25- and 30-degrees with nary a sign of rain.  The combination of continuous heat, low humidity and no precipitation has left the boreal forest tinder dry.  Less than a week ago, over 300 buildings were incinerated in the catastrophic fire that pounced upon the unsuspecting town of Slave Lake.  The aftermath looked like a scene from the apocalypse. 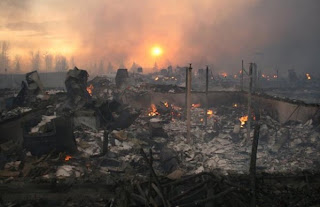 Since then, wildfires have continued to spread across the province with some of the largest here in the Regional Municipality of Wood Buffalo.

The Wood Buffalo Environmental Association monitors the air in the region, and their Air Quality Index readings give an at-a-glance synopsis of where the smoke is more heavily concentrated in any given hour.  It changes almost constantly.  This morning the lower townsite (Athabasca Valley) and the Thickwood and Timberlea (Patricia McInnes) areas are covered in smoke while our neighbors in Fort McKay and Fort Chipewyan are relatively clear. 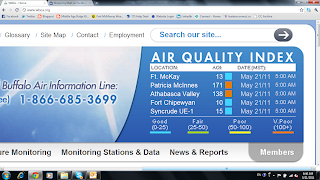 I've been in Fort McMurray since 1996 and I don't remember it being this bad.  That said, I missed the historic Mariana Lake fire of 1995, when the community was cut-off from the outside world for a period of a couple of days.  Residents who were here recall having to dust ash off their vehicles it was so bad.

For some of those who have never lived in an area prone to wildfires and an occasional blanket of smoke that  wraps itself around a community, there is a sense of panic and dread, as if a forest fire is looming just outside city limits.  But now, thanks to online sources of real-time data, the common citizen can find out what's happening, post questions on Facebook and get almost instant feedback, and monitor wildfire's rapture on your laptop from the comfortable confines of your soft office chair.

It's 6 pm somewhere and the earthquakes predicted by Mr. Camping to signal the start of the end of the world have failed to materialize.  So, just maybe, we'll see tomorrow, and the continuation of the smokiest Victoria Day long weekend in memory.
Email Post