Up and down Mulberry Street 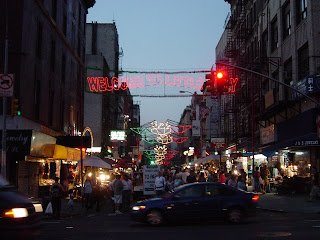 Mulberry Street had been closed to traffic, slicing through the heart of Little Italy in lower Manhattan. Games of chance were peppered with vendors of different sorts and a constant stream of people. In the middle of the celebration was a statue of St. Anthony, patron saint of miracles, with dollar bills attached to the area near his feet. 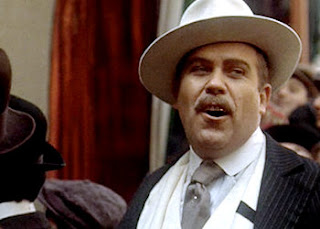 If you think about the scene in The Godfather when Vito Corleone, played by Robert DeNiro follows the white-suited local mafia boss through a walking parade honoring this very same saint, you would have the picture. While the technology has changed and the streets have been probably paved over a couple of times, not much else has changed in 100 years. 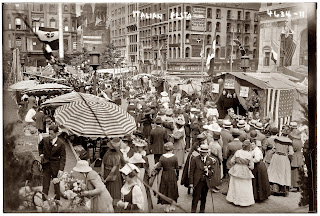 We had discovered yet another fantastic neighborhood in the city that never sleeps, brimming with life, activity, food and fun. 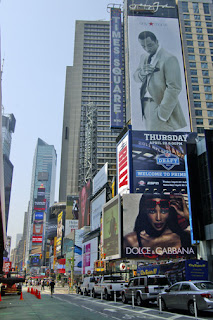 Our third day in New York began with a stroll up an uncharacteristically quiet Broadway Avenue, as it was still pretty early. Not able to blend into the crowd, we were an easy mark for pitchmen trying to raise money for a homelessness initiative and others trying to sell bus tours.

My purpose in getting started early was somewhat rooted in the idea of getting tickets for an afternoon matinee. So, while Heather went to do some shopping, I stood in the line at TKTS in Times Square. This is a nonprofit service that sells remaining ticket inventories for most of the shows playing on and off Broadway. Most are there, priced between 20 and 50% off. The only exceptions are the mega-hot items like Wicked and The Lion King. 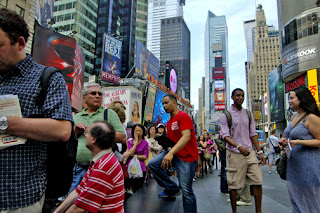 The line to grab tickets for the musicals was already winding back and forth stretching hundreds of feet. The good news was that I was looking to buy tickets for a drama, a decision that had me about 8 individuals from the front of the line.

I enjoyed a lovely visit with a couple from Austin, Texas who grew up in NYC. They shared with me how much things had changed.

"Times Square was nothing like this," she said. "I remember bringing my kids when they were old enough and arriving at a subway station not far from here. The smell was indescribable."

"The people are nicer, too," chimed in the husband. "It didn't used to be this way."


The show we chose was Tom Stoppard's Arcadia playing at the Ethel Barrymore Theatre (note the Canadian spelling, which I just noticed myself) on West 47th Street. It was an outstanding show starring Billy Crudup who played the rock star in Almost Famous and the lead in Big Fish. Though I struggled to stay awake - seeing shows in the afternoon has always been difficult for me - it was a great experience to see a strong ensemble from our enviable position four rows from the stage. 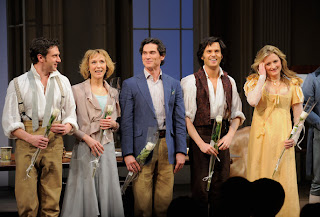 The Barrymore was opened in 1928, during the heyday of theatre activity in the Big Apple. It seats just over 1000 people. Lush, ornate, and majestic, it has hosted an impressive list of productions and stars ranging from Wait Until Dark and Pal Joey to Katharine Hepburn and Laurence Olivier.

One of the many great things about being in the heart of Manhattan is that you're a $20 cab ride to almost anywhere you want to go on the island. Last night, a small Italian restaurant was the destination on Bleeker Street in Soho. The food was wonderful, my favorite being an artichoke and crisp parsley dish along with the main course of pasta with a 5-mushroom sauce that was to die for.

Unlike so many places that we've been, there doesn't seem to be many pauses in energy in this great city; the action just keeps going and going. It is fantastic.

We will spend the morning exploring yet another neighborhood before making a dash for LaGuardia to begin our journey home to Wood Buffalo.
Email Post