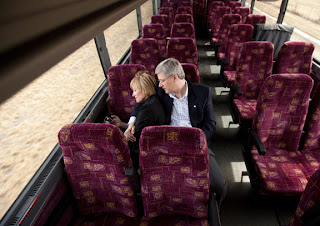 It started innocently enough with posting this picture on Facebook, of Prime Minister Stephen Harper and his wife Laureen on the bus, a very private moment in the middle of a very public campaign.  I had seen the image in the May 16, 2011 edition of Macleans, a huge publication that covers the federal election, the Royal Wedding and the death of Osama Bin Laden - it was a busy news week.

I had this feeling looking at the various shots of the PM and his wife, scattered throughout the coverage of the most mind-blowing Canadian election in recent memory, that they looked particularly connected, vulnerable, in love. It was this feeling that compelled me to share the bus photo, as it shows a rare glimpse of Mr. Harper's human side.  I had no idea that lurking below the humanity was a potentially untold story.

Francine posted a response to the picture on Facebook that said "I would believe that this picture was staged, since they have been legally separated and living apart for more than a year now."

What? I thought to myself.  That can't be right.  How could I have missed that?  And how could the national media have maintained the cone of silence on something like this for so long, if it's true?

When I went looking for the bus picture, I started with a Google search, typing in "Stephen Laureen Harper". Popular queries came up automatically, which, in this case included the words "separation" and "divorce".  I didn't give it a second thought as the internet is peppered with erroneous content.

I went back to the Google search to see what I could find out about the first couple of Canada.  While there are a number of references to the matter on political forums and the like, I could find little in terms of verifiable evidence that a continental divide has pierced 24 Sussex.  That said, 99 times out of 100, where there is smoke... 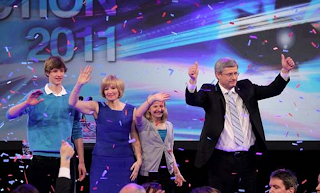 Looking back at the images in Macleans through this new lens, everything changed.  What I saw before as love, now looks like longing, vulnerability is hurt, and connectedness is emotional panic. 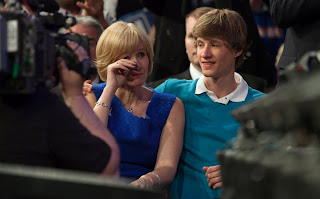 I won't repeat what has been suggested in the various forums, but enough high-ranking sources have been cited to suggest that an untold story is there, simmering, waiting.

A lot has been said about the relationship between the PMO and the news media.  Mr. Harper's staunch control of the message, his cold and calculating interchanges with reporters, and his legendary grasp on information flow suggests that if any Prime Minister was capable of keeping the hounds off the trail of marital discord it would be him.  Or, is it possible that the story IS there, and that it's just not being told, because that is not the Canadian way of doing things? Maybe we're better than that.
Email Post