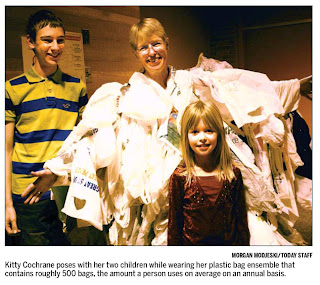 We have a small closet, right next to our kitchen, that overflows with multi-use shopping bags.  If you open the back of our Ford Escape, you'll find a box equally stuffed with bags that have become ubiquitous in our region since the single-use shopping bag bylaw came into effect on September 1, 2010.

Based on the results of a survey that was conducted this summer, there are a lot of people strongly in favour (57%) of this piece of legislation and a lot in opposition (36%).  Those who express neutrality on the subject are few and far between (7%).

The controversial bylaw was passed after impassioned presentations and vigorous debate last term.  One year along and millions of plastic bags are no longer finding their way into the solid waste stream, businesses have adapted to this new way of operating, and citizens mostly remember to bring their own bags into the store when they go grocery shopping.

Was this bylaw a good choice for the environment?  Has it made a difference?

"There is no question," said Darcy Dragonetti during the public hearing at last night's Council meeting.  He was speaking on behalf of administration.

Is there a down side?  Absolutely.

Incidents of shop lifting have gone up (I think they refer to that as slippage).  Some residents, resolute in their opposition, have taken some of their shopping dollars down the highway.  There have also been some mistakes along the way, like buying multi-use bags that ended up falling apart after several uses.

At the end of the day, our job as elected officials and our job as citizens is to strive to do the right thing.  Based on the perspectives of my respected colleagues and a majority of the residents, the right thing is to keep the bylaw in place but to engage our community in how we can make it better.  We voted unanimously to direct administration to bring back suggested amendments to the single-use shopping bag bylaw in March 2012.

Among the many thing we learned during the Municipal Development Plan process is that excellent community engagement results in an excellent plan.  We need to do the same with this issue.  If we do it right, the divisiveness will fade away and we'll be left with a piece of municipal legislation that others will invariably follow.
Email Post