I meandered through the throng of politicians and community leaders mustered in the front foyer of the Sawridge Inn & Conference Centre, searching for Dave Rodney, MLA for Calgary-Lougheed.  I was attending the Northern Leaders' Dinner, a fundraising event for the Alberta PC Association, and the venue for Premier Redford's first keynote address in our community as the leader of our province.

"Do you know if Dave Rodney came up?" I asked the Honourable Dave Hancock.

So, I kept going, moving into the adjoining lounge where there was less congestion and several pockets of politicos deep in conversation.

"Excuse me, but do you know if Dave Rodney is here tonight," I asked Minister of Infrastructure Jeff Johnson in a scrum with Deputy Premier Doug Horner.

"He could be here, but I'm not sure," he answered.

I never did find Dave.  As it turns out he was at another event down in Calgary.

Back in a distant other life - long before politics, Keyano College, radio and donut baking - I did a play with Dave at St. Thomas More College in Saskatoon.  We had cobbled together Robert Bolt's A Man For All Seasons under the banner of Newman Players on the occasion of the 50th anniversary of the college.  Dave was loquacious in the role of Henry VIII, the counterpoint to my turn as Sir Thomas More.

It was a carefree and vagabondish time in my life, attending classes (when I felt like it), wearing tattered jeans and ripped up shirts, and staying up way too late way too often.  They were my halcyon days - the fleeting time between the comforts of living at home with Mom and Dad, and the responsibilities of adult life.

Dave went on to climb mountains, Everest among them, and launched into the motivational speaking circuit and a successful political career.  I went north during one of the coldest months in memory and began the Fort McMurray chapter of my life.

I didn't get to reconnect with my old acting buddy - that opportunity will need to wait for another day - but I did get to meet and chat with a multitude of ministers and discover points of common interest and history.

It turns out that Municipal Affairs Minister Doug Griffiths may have been a listener of my Q14 Wake-Up Call in Stettler.  We shared fond memories of the wonderful weatherman who was based at the airport in Coronation, Ryley Workman, and a good friend of mine, Dan Chabot, who did the morning news in that community for years and years.  The Honourable Minister even did a crackerjack impression of my French Canadian newscaster buddy (also the world's biggest Montreal Canadians fan).

Our new Finance Minister, Ron Leipert, was at the event.  We both have strong Saskatchewan roots and his Uncle Julius spent some time working for my Grandfather back in the 1940s.

It was nice to see Minister Heather Klimchuk again.  We first met at the AUMA conference a few weeks ago, before the cabinet switch.  She is now in charge of culture, volunteerism and a few other things that are strong interests of mine.  It was nice to discover her personal passion for the arts, as both a dancer and a parent of a dancer, and to hook her up with one of our region's most ardent arts and nonprofit advocates, Christine Burton.

Meeting Premier Alison Redford was an absolute treat.  She is completely genuine, down-to-earth, and focused on getting us the results that we need, whether related to land release, transportation or healthcare.  And even though she floats high above me in the political stratosphere, we still managed to find some common ground during our brief introduction: we were both elected by the slimmest of margins.  I think we respectively realize how things could have easily gone the other way, and that it's important to stay humble. 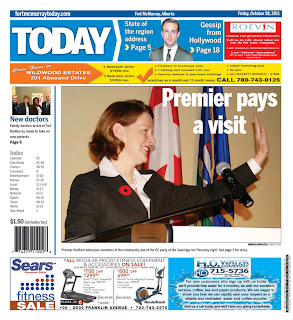 The Premier had a lot of quotable moments during her speech, but I think these two sentences sum it up brilliantly:  "Our goal is simple.  It is to make this province better."

Madame Premier I completely agree.  And we're ready to help you make it happen.
Email Post