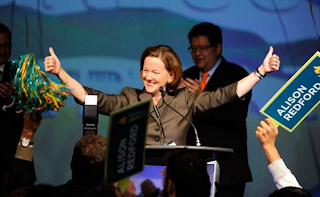 All the rumors, suggestions, signs and prognostications were pointing to an Alison Redford upset victory late last night (early this morning) as two constituencies had yet to finalize their count. And while all signs were now pointing in one direction, I was having a hard time grappling with the math.  I decided that I needed sleep more than I needed to experience the impending coronation in real time. 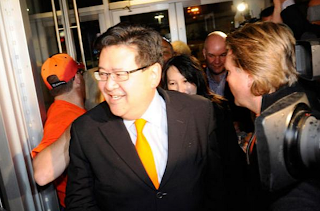 Gary Mar was up by almost 4,000 votes.  In order for him to lose, Redford would have to have been the second choice on a disproportionate number of ballots of those who chose Doug Horner as their top pick. I guess that is what happened, as Alberta now has their first female premier.  The former justice minister ended up with a 1,613 vote edge on our former representative in Washington.

What a week for Redford.  While down at the Alberta Urban Municipalities Association convention, we found out that she had to pull away from the campaign to deal with a personal family matter.  A short while later, word trickled out that her mom had died.  Imagine the roller coaster storm of emotions she has weathered in the past few days. 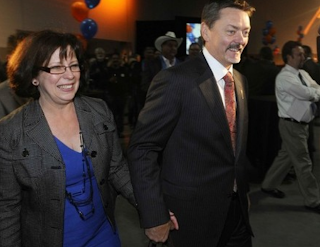 The genuine, intelligent and classy Doug Horner, and his many voters across the province, ended up writing the final chapter in this exciting leadership story.  That collection of voters definitively had Alison Redford as their second choice.  They were the tipping point.  Horner was very gracious in defeat and will likely emerge from the inevitable cabinet shuffle to come with a strong portfolio.

What now for Gary Mar?  He was the choice of just under 49 percent of the party.  He had the largest war chest, the most ministerial experience, and arguably, the most significant international panache of all the candidates.  Will he run in the next provincial election, now likely to happen in 2012, or will he take his bow from the political stage and move into private life?

Elections are amazing things.  Emotions run high, anticipation and anxiety become heightened, bitterness and acrimony become familiar bedfellows.  There are jubilant winners just as surely as there are disappointed losers.  Those in defeat rise up and give their concession speeches, while their hearts lie shattered on the floor.  The winner grapples with elation and finds the best words to embrace the fallen and honour their supporters.

Just over one year ago, many of us in Alberta went through all of this, on a much smaller scale, during province-wide municipal elections.  I will never forget that night as I squeaked out the tiniest of victories.  Redford will never forget last night, as she made history, and ended a week of shattering personal loss with an unforgettable photo finish. 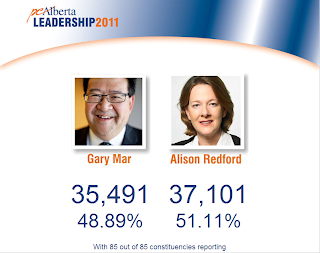