My wife Heather walked into my study this morning and noticed our shirtless neighbor standing outside his back door enjoying a cigarette.

"That's what you used to look like," she replied.  I was a little taken aback. 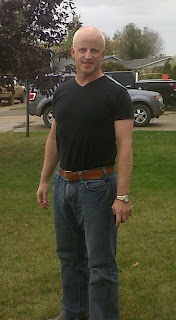 I've come a long way in a month, from the heaviest I've been in my life to the lightest I have been for 15 years.

It should have been a tough week, spending much of it at a convention, not the most diet-friendly environment.  However, I managed to improvise and stick pretty close to the Ideal Protein food program.  While most were dipping into the rich foods and abundant beverages offered at complimentary receptions and banquets, I was sipping on my water and devouring copious amount of salads and available vegetables.

The Regional Municipality of Wood Buffalo won the Outstanding Achievement award at the convention, for the innovative and leading edge synthetic ice rink that was installed in the Archie Simpson arena at a fraction of the cost of a traditional artificial ice surface.  Mayor Melissa Blake and CAO Glen Laubenstein accepted the honour from Hector Goudreau, Minister of Municipal Affairs, and the rest of the Councillors present dashed up to be a part of the group picture.

Returning to our seats I felt a tap on the shoulder and the voice of someone saying my name.  I turned around to realize that it was Ray Telford.  He was my first boss in the radio business, then a general manager of CKNL Radio in Fort St. John, BC, now an economic development officer for the City of Camrose.  We hooked up later that morning and enjoyed a delightful reunion after 22 years. 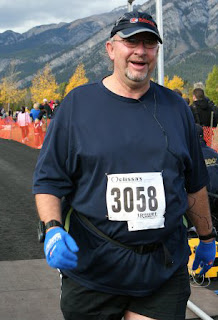 When Ray was 40 he made a decision that he wanted to run a marathon.  The fact that he was over 300 pounds didn't hold him back and he successfully accomplished this amazing feat.  Even though he was very physically active, he was unable to realize weight loss, until he started the Ideal Protein program.  He has since dropped over 50 pounds and looks and feels absolutely fantastic. 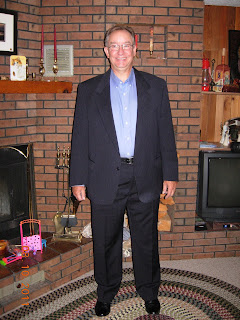 Even though aspects of the program are challenging for him, Ray is sticking with it, intent on reaching his target weight.  He is an inspiration!

I got back from four full days at the convention and darted over to BACK on TRACK with BARB yesterday morning for my weekly weigh-in and measurement.  Barb was curious what had happened the previous week as she had never seen as much progress in week four of the program.

"Just for my own curiosity, let's get you on the big scale this week," she said.  The "big scale" is one that measures everything: body fat percentage, muscle and fat mass, visceral fat rating, BMI and metabolic age.

Barb is keeping me on phase one for another week before we move into phase two and the reintroduction of calories and eventually carbohydrates in phase three.

At the conclusion of week five I have dropped 21 pounds and well over 20 inches.  I feel trim for the first time in recent memory and it feels great.  Thanks Barb!
Email Post