"Breathe," Heather typed using BlackBerry (free advertisement for our floundering friends at RIM) Messenger from her hotel room in Mexico.

I had shared with her that I was feeling rather stressed (and mildly overwhelmed) after a particularly challenging day.  I told her that I had put on some soothing classical music (Andre Gagnon - Piano Solitude), was drinking lots of water and that I would most assuredly add some breathing into the mix.

The root of my unease started at the US Airways check-in counter in Manzanillo on Saturday.  I had given them my favourite credit card to pay for the pieces of luggage that I decided to check.  After several attempts and several other cards, one finally worked and off we flew, homeward bound after a week in Mexico.

I tried the card again once we were back in Alberta, gassing the car up for the final leg of the trip up Highway 63. Again, something was coming up on the screen as an account problem and I had to use an alternate card to make that payment.

At this point, I was more annoyed than anything else, thinking the attempted transaction in Mexico might have raised a flag putting the account on hold.  I would deal with it later when we got home.

I pretty much forgot about it till that evening after everything had been unpacked, the boys fed and the laundry mostly done.  After a brief conversation with a patient representative with Scotiabank (I say "patient" because I was decidedly less so and a little too verbal in expressing my frustration) I discovered that a rarely used credit card that was carrying a tiny balance (~$25) was the culprit.  I inexplicably neglected to pay anything on this account for a number of months which set in motion a series of actions that deflated my spending limits on both my credit cards.

Arriving home after our holiday there were three separate letters from the bank raising flags of panic over a balance of $25.  As you might imagine, I was ready to lose my mind!  Thanks for the warning folks!

Like many other things in life that are beyond our control, this seemingly asinine assault on my credit limits and credit rating put the screws to the wonderful piece of mind and sense of balance I was feeling after an idyllic vacation.

I felt better after finally getting through to a customer service manager at the bank today who explained to me what happened and why the reduction in the credit limits and resulting decompression of my credit rating is not something they can fix.  Apparently, any series of non- or late-payments, regardless of the amounts, can cause this to happen.  So, the fact that I owed a measly $25 on a rarely used card meant sweet tweet.

Long story short, I have to diligently make all my payments for the next six months in order for things to go back to normal.  Lesson learned I guess.  I still feel like a big doofus and wish I could have a DO OVER.  Do you ever feel like that?

Sadly, this is not a new feeling for me, and likely for any of us.  I am determined to suck it up, make my payments with haste and absolute consistency, and get back up on my spending-enabled horse some time in July. 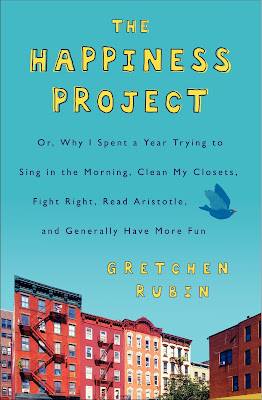 Maybe what I ought to do is dip back into The Happiness Project by Gretchen Rubin.  This terrific tome talks about many of the little things in life that take small bites out of our happiness and how to make tiny adjustments to be more content.  Nine times out of ten it is less about the things that happen to us, and more about how we choose to react to those things.

So I shall breathe (thank Heather!), drink my water, and slow my heart rate down to the quiet piano creations of Mr. Gagnon before going to sleep.  Because in the immortal words of Scarlett O'Hara, tomorrow is another day.
Email Post