Two plumes of smoke on the hill on the eastern side of Bahia de Navidad quickly became four, five and six. As I was sitting there feeling premonitious about what lies ahead this spring and summer in Alberta, locals were shrugging their shoulders as if to say "whatever". Eventually the fires subsided and overnight we were treated to a rain shower to make sure there was a definitive period at the end of that sizzling sentence.

We took a short 25 peso cab ride to Mugs and Bob's place for an evening soiree with all the yoga people. I started to prepare the salad while Heather took Ben and Dylan on a quick tour of the lagoon. As Murphy's Law absolutely dictates, on the one tour around the lagoon that I didn't take, they managed to spy a super large crocodile out for an early evening swim. 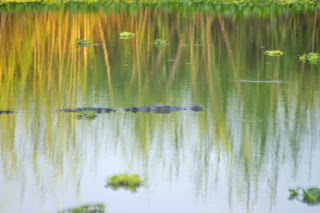 One of the great side benefits of attending this pleasant gathering was to ask a lifelong local (who speaks good English) some questions about Melaque. Apparently, the community's history goes back hundreds of years, back to the time of the arrival of the Spaniards. It quickly became a centre for fishing and logging as the area was rich with precious hardwood trees. Eventually it became a centre for ship building.

I asked about the many beach vendors and why they looked quite a bit darker than everyone else.

"Part of that is the amount of time they spend in the sun," she said. "But most of the vendors come up from the southern state of Guerrero."

It sounds like they lease small retail spaces and sell from there while other members of the family work the beach. The months bookmarked by November and April are the high season for these folks, while the months of August and September are near impossible as the combination of heat and humidity make Melaque inhospitable even to those that live here. 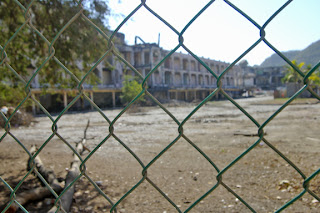 As to why the gigantic resort destroyed by earthquake in 1995 remains a shattered ruin almost 20 years later, she said that it's "an ownership issue." It sounds like a rather fierce legal dispute that is more likely to be solved looking down the barrel of a gun rather than a judge. 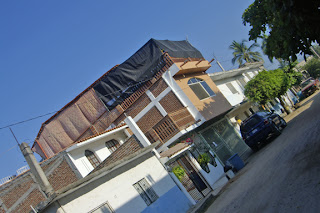 Mugs and Bob bought a small dwelling and store one block from the lagoon a number of years ago for the amount you'd pay for a small car back in Canada and poured a modest amount into renovations. A two-car gated garage leads into the living room and out to a walled garden in the back that is absolutely stunning. They added a third level and a rooftop covered yoga studio, their Mexican location for S.O.Y.A. (South Okonogan Yoga Academy). With fabric draped from the roof over the balcony, the dozens of aspiring yoga practicioners are protected from both the sun and the abundant birds that swoop into the area to bask in the lush vegetation of the lagoon and environs. 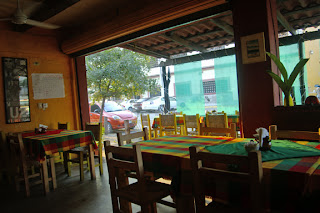 I'm back at Roosters this morning, sitting at the same table, back to the wall looking at several tables of Canadianss enjoying breakfast while a light rain falls. The forecast was bang on the money as they were calling for showers for both today and tomorrow. The precipitation will douse any worry that may have been caused by the jungle fires and put Dylan, Ben and I into the mode of getting ready for the long trip home where it is feeling like -40 C this morning. Apparently, by the time we get back the temperature will be as we left it, hovering just below the freezing mark.

I'm guessing that it's pretty clear how much I like Melaque. Yes? This community has a slow-paced non-aggressive vibe that I quite enjoy. It's a place and a people that don't take themselves too seriously. We have felt comfortable, safe, unhurried, and infinitely relaxed. Time to carpe diem, the last diem of this Mexican vacation.
Email Post