An old man of maybe 70 or 80 approached, pulling a small ice cream vending cart, the two wide front tires rolling haltingly over the sand, a third smaller wheel in the back trailed desperately behind.

"Hola," I replied, shaking my head that I wouldn't be buying any of his frosty treats today - we had just returned to the beach from a mid-afternoon ice cream snack. 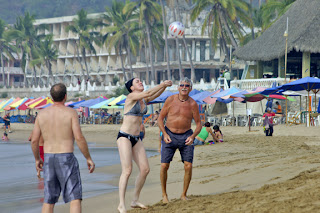 This is a beach economy, as locals and tourists pepper this long stretch of sand, formed in the shape of a crescent, likely 3 or 4 kilometres from tip to tip.

At at table positioned right outside our hotel, an entire family spends the day carving mangos and papayas, turning them into impressive displays that they hawk up and down the beach. Ben enjoyed one of their mangos on a stick, a 25 peso treat that left him smacking his lips with satisfaction.

Young fellows with small backpacks and a binder full of images, attempt to lure the ladies into letting them install a henna tattoo for a reasonable price. Others come buy with necklaces, bracelets and assorted trinkets. Some have inflatable toys and other youthful attractions trying to get the young kids to work their magic with Mom and Dad.

One guy came by with a stack of hats that caught Dylan's attention.

"One hundred and thirty pesos," the dapper looking gentleman replied.

That is about ten Canadian dollars, I thought to myself, quickly doing the math in my head.

Dylan tried on the hat, but ended up sending the saleman on his merry way as something didn't feel right.

The presence of so many entrepreneurs suggests several things to me. First, that people bring lots of money to the beach. Apart from being a beach economy, this is one that works in cash more than electronics. The English speaking waiter at the restaurant warned us that very few places accepted VISA or any other kind plastic. 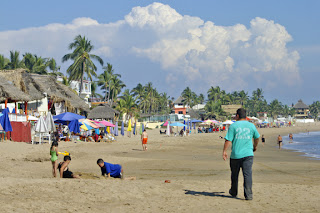 Second, activity on the beach must be a year-round reality, as here we are, on just a regular type day in February, and business is booming.

These are incredibly hard working people. They go up and down this hot beach, trudging through the sand, battling the heat and more no thank-yous than responses in the affirmative.

It seems to me that Playa del Carmen (our stop the previous two years) sported more of a street economy. There are lots of businesses in the heart of Melaque too, though much smaller in number and with proprietors who let you pass without trying to lure you into their space.

We learned about a different kind of street economy while in Italy about 6 years ago. Vendors there would be set up whether they could find an empty space, selling everything from knock-off watches to belts and silk ties.

As tourists, we are intent on relieving our wallets of their wearisome wares. This spending compulsion has afforded myriad families with a means to make a living in a country where poverty is common. One part of me wants to support them all, while the frugal side of my brain protests. So, I smile and wave, hoping the sun worshipper down the way has a need for a handmade wooden snake.