Each trip we take it seems that there is one lasting beach image that remains long after the trip has been marked down in the annals of our family's history. Last year, it was "Iguana Man" that stood the test of time, an older European gentleman who stood facing the sun as it tracked across the sky. 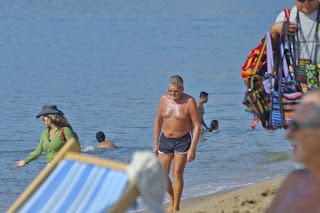 This year, it is another older man, large but not super-large, slightly stooped at the shoulders and tanned from head to toe. All day he walks up and down the beach with purpose. 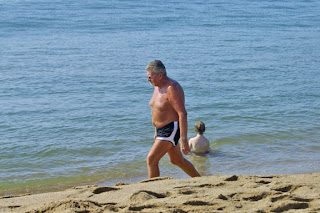 He must have passed us 10 to 15 times, walking back and forth, a stretch of a couple of kilometres. I wonder what he thinks about, what propels him to complete yet another circuit. Is he angry? Is he trying to forget? Or, maybe he's trying to remember. I have yet to see him still. 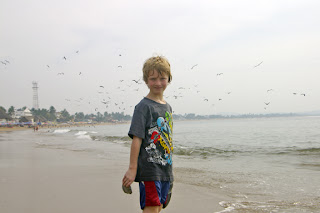 Ben and I strolled all the way from the spot in front of our hotel to the end of the beach on the north end, watching the hungry pelicans doing their morning fishing. There are so many of them it's a wonder that the sea is able to provide for them all. An American fellow was trying to compete with the birds, but not having a lot of luck. He ended up getting his line caught on a seagull and him and his wife were having a devil of a time trying to untangle things. 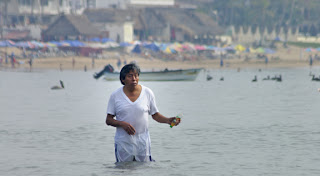 A local was using a plastic pop bottle as both rod and reel, patiently standing waist deep waiting for something to nibble. He was using a couple of rusty bolts as weights with a simple hook and small morsel of bait. 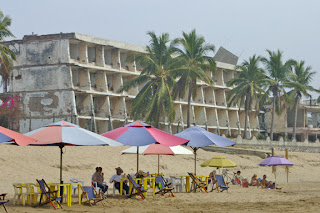 Walking along this expanse you see the rambling ruins of a former resort that was destroyed by an earthquake in 1995. The shell remains, slowly succumbing to the elements. It surprises me that a multi-national hasn't come in, leveled it to the ground and put something new in its place. But this area does not have the tourism cache of the Mayan Riviera where luxury resorts are commonplace. 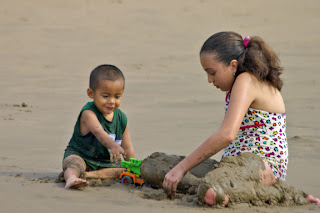 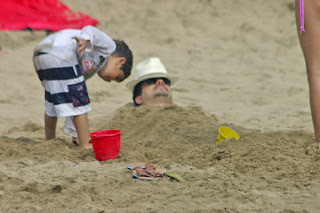 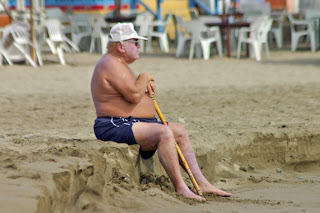 Families frolic in the sand, children cover up their sleeping dad with sand, seniors sit and watch. Unfortunately I am unable to upload pictures with the technology I have with me down here, so the imagery to support the stories will come later, when we're back in Fort McMurray. 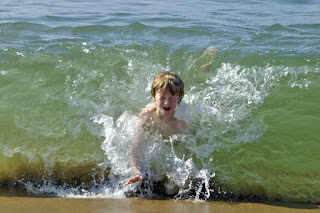 The waves here are extraordinary, very different from those at the Mayan Riviera. These waves pack a whollop and at time have the power to knock you over. Once you get the hang of it, you can toss your body up on to the crest and go for a good ride. Both Dylan and Ben spend hours in the water battling the waves and having the time of their lives. I purposely set a time limit so they don't get too burned. Even Dylan - not prone to tanning with his darker skin - got a little red in the cheeks. 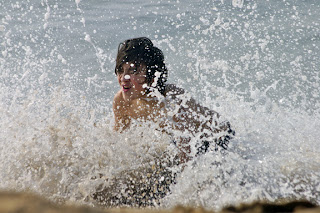 They started having fun with dead fish that kept popping up, first a little rock cod, then a long eel-like species, following by a third that we couldn't quite reach. Apparently, this area is experiencing a little red tide which is causing an abnormal amount of fish to come floating to the top.

By the time Heather got back from another day of teaching and learning, everyone was famished and ready for some dinner. Our pattern has been to have breakfast and lunch in the suite and venture out for a nice meal in the evening. Being a somewhat overcast day, we decided to go through a longer stroll trying to find a Mayan restaurant strongly recommended by Mugs, Heather's yoga teacher. Unfortunately, getting to our destination we discovered that Monday was the one day in the week that they were closed. It was a blessing in disguise as we were able to explore some of the interesting homes in the area, imagining what it might be like having a winter escape of ouur own some day.

We ended up at Roosters again for dinner, a small restaurant just a block from the hotel owned by a Canadian. John has been working there for three years, originally from Ottawa.

"What has it been like living down here for three years?" I asked.

He paused, thought deeply and answered.

"You learn a lot about life here," he said. "You learn to get by on very little, that there is a lot more to life than money."

He met a local, fell in love and made the leap. They may need to move when their child gets to high school age, as the local system isn't the best for keeping kids in school past a certain age.

But hearing John speak, seeing the sincerity in his eyes, you know that moving to Melaque has been a life-changing experience and has re-ordered his understanding of what matters in life.

"You learn a lot about life," will be a statement that stays with me long after we return to the frozen north and our regular routine. If you're ever in Melaque and want a welcoming experience with amazing food, try Roosters on Avenue Garcia Farais.

As I type this, I'm enjoying coffee at what has become our regular morning stop. It's a pleasant way to start the day, sipping on a hot cup of Jo while capturing some of the memories and moments that make travel so special.
Email Post