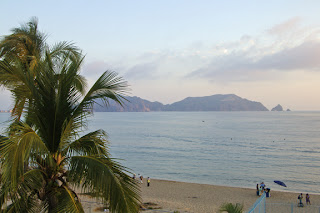 The sounds of the waves crashing into the Melaque beach come spiraling through our opened window on the third floor of the Puesto del Sol Hotel, surreal, almost too loud, too dramatic. Through the night, it is the only sound we hear, no latent party goers, or Mexican rabble rowsers as we had been warned about, just crashing waves and silence, a soothing juxtaposition. 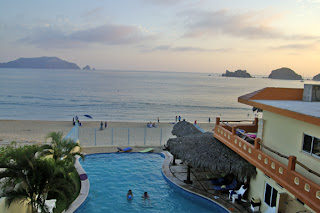 We have a balcony, another living room open to the elements, from which the waves don't seem as cataclysmic. Mixed in with the singing grackles, sandpipers, and the emergent human sounds as this small community begins to stir, the waves almost fade to background, a consistent whisper.

The arrival at Manzinillo was very different from our previous two arrivals on the other side of the country. The landing strip runs parallel to the Pacific and the air, while moist and warm, did not feel as suffocatingly hot as when we landed in Cancun.

Immediately after leaving the airport, we were captivated by jalepeno fields, soaring condors and a distinctly agricultural quality, more naturally abundant than the environs on the Rivieran side,splattered with luxury resorts and dusty highways.

Ben is anxious to hit the water, pacing back and forth, waiting for me to finish my blog post. As the sun is nestled behind the clouds (for now), this is a great time to go for a swim. More to come, as our Melaque adventures continue.