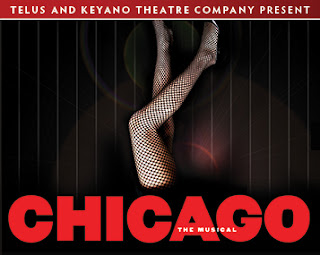 There are any number of things I should be doing right now.  With several presentations looming on the not-too-distant horizon, I should be focusing my efforts there, but doing so would be doing a disservice to the cast and crew of Chicago, a Keyano Theatre Company musical production that we enjoyed this afternoon.  So, while the thoughts and impressions are fresh in my mind, I'll try to hammer them out before I have to get the steak on the barbecue.

Watching a show of this scope and scale reminds me of the incredible gathering of skill, experience, knowledge and effort that is required to make the magic.  The thousands of intricacies that have to come into alignment to produce a show as stellar as Chicago are unfathomable to the general public, which is as it should be.  Regardless of how complex or difficult, if it comes across as seamless and effortless, you've done everything right.

I think of the dressers backstage, frantically trying to execute that quick change in time for the next musical cue.  I think of the fly crew, waiting to drop the love sign or that fantastic diagram during the court scene, doing everything they can to hit their marks.  I think of the audio operator, doing the dance between a multitude of lavalier microphone levels and myriad sound cues.  I think of the talented carpenters who created the two movable staircases that spun, rotated and were locked in place with but a quick click of a switch.

From the visioning process, when several designers collaborated with the director and production team, to the many hours of construction and installation, the process of putting this size of a show in place at Keyano Theatre is intense and should never be taken for granted (not suggesting for a moment that anyone is doing that as we have a very appreciated and savvy theatre audience in Fort McMurray).

My blogging colleague Theresa Wells described Chicago as "sheer fun, pure entertainment" in her post titled "Chicago is Smokin' Hot - And I Don't Mean The One In Illinois". She was spot on in my view and did an eloquent job catching the high notes of what proved to be one of the strongest shows we've seen in a long time.  Artistic Director Claude Giroux said that "he would challenge anyone to find a community theatre show this good."

Watching the collegiality of the cast in the social media universe in advance of opening night and getting some inside perspective from Beth Fauerbach, the choreographer of the show who was staying at our house, it is clear to me that the success of Chicago is largely rooted in the strong and supportive team that developed.

"While we were working on scenes, those not involved were on the sidelines, giving their full attention," said Fauerbach.  "The level of support was something special to experience.  It doesn't always happen this way."

The result of all that work, care and attention is clear to see.  This is a toe-tappin', sizzling, action-packed two hours that doesn't disappoint.  Standout performances are plentiful and short of saying something nice about everyone - because this truly was an ensemble-enabled home run effort - I have to congratulate Alexandra Price and Amanda Campbell for delivering performances that were stellar.  I also thought Jeff Hoffman gave the performance of his life as Billy Flynn, and Jenny Price was the ultimate Mama Morton. But I can't stress enough the importance of the great work that was done by the many individuals in the ensemble. They all contributed to the end result and without any one of them, the show just wouldn't be as good.

Congratulations to the entire production team, cast, staff and volunteers at Keyano Theatre Company.  If you are reading this and haven't seen Chicago yet, don't miss your chance.  The production runs Wednesday, Thursday, Friday and Saturday evening next week, with an additional Saturday matinee.  The weekend evening performances are very likely to sell out, so I would strongly suggest you head to the online box office right now to find your seats.  You deserve to see Chicago, everyone does.
Email Post