"The only mistake we could possibly make is to think too small," said Councillor Allan Vinni in his closing remarks about the City Centre Area Redevelopment Plan. 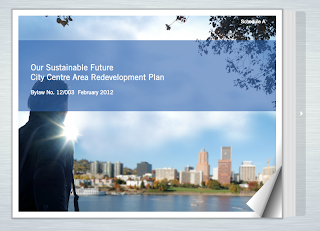 As we went around the proverbial horseshoe in council chambers, it became clear that this landmark plan for transforming our downtown into a global of for urban living in the north had strong support.

"I'm going to keep you in suspense until the vote is called," said Councillor Phil Meagher, doing his best to keep us guessing, with a perfect smirk and a steely gaze.

I think it was a landmark decision that will set the course for turning our lower townsite into something special over the next few years and decades.  And though it is a bold vision, one theme ran through most of the comments received since the draft plan was revealed in November: people want to see ACTION.

Owing to multiple plans that have been prepared through extensive consultation with the public over the past decade, our community is understandably insistent that the catalyst projects emerging from this plan see the light of day sooner than later.

"For my part, I want an aggressive implementation of this plan," said Councillor Don Scott.

A number of quick wins have been suggested as strong possibilities that could materialize following the development and approval of the Land Use Bylaw that would officially facilitate the action so desperately desired.  Mentioned last night as projects that we could see in short order include Snye development, a city square, a rapid bus transitway, and an aging in place facility, to name but a few.  Other ideas being considered include a civic centre, an iconic pedway to MacDonald Island, and possibly a downtown arena/performance centre.

Councillor Sheldon Germain shared with us the impact that a recent trip to Columbus, Ohio and Kansas City, Missouri had on his ability to imagine what is possible with downtown development.  Integrating entertainment districts with public spaces and sport and entertainment complexes turned what were ostensibly parking lots into something those communities hold up today as points of pride.

I appreciate the work that was done by the entire team to put the City Centre Area Redevelopment Plan together in consultation with multiple stakeholders and thousands of citizens.  This wasn't just another document coming before Council for approval.  This one felt personal, infused with passion and meaning.

As Carol Theberge introduced the vision at last night's public meeting, she had fire in her eyes and excitement in her voice.  I had shivers, even though I had seen the exact same presentation on no fewer than three other occasions.  To me, the gut level reaction the plan inspires in me speaks volumes to the effort and inspiration that went into its creation.

I am confident that we are heading in the right direction and can't wait to see the first shovel in the ground.
Email Post