Controversy on the Snye 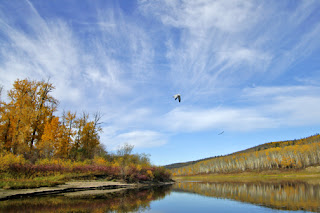 I have often described the confluence of the Snye and Clearwater River as being "my happy place".  If you were to add up the amount of time I've spent on that sandy point (called Willow Flat on a map from 1910) it would equate to full days, likely weeks. I've done a lot of fishing and enjoyed many hours of calm reflection and communion with nature at that spot, just a few short blocks from my house. There is a lot of personal connectivity, not to mention local history, contained in this waterway that once was connected directly to the Athabasca River.

A controversial decision back then, a land bridge was constructed in 1964 to facilitate access to, and development of, MacDonald Island.  Approved by the council of the day and considered a death sentence for the Snye by others, the dyke road ultimately led to the incredible gem we have today with the Miskanaw Golf Course and the Suncor Community Leisure Centre.  Sadly, the small stretch of water that used to flow either east or west depending on the height of two two rivers it connected, is a shadow of its former self.

As a resident, I've been reading about Snye remediation schemes for the better part of a decade.  One study after another was commissioned with solutions ranging from blowing out the dyke road and putting in a bridge to increasing the size of the culvert that runs underneath the dyke to allow a greater volume of water in from the Athabasca.  Millions of dollars have been spent in trying to figure out how to bring this historic water body back to a healthier ecological place.

Meanwhile, activity and use of the Snye has marched on.  I've seen firsthand the exponential increase in the number of boats accessing the water and the inordinate number of PWCs (Persona Water Craft) or Sea-Doos that take over the Snye space adjacent to the spit of sand that often is filled to the brim with vehicles spending some time by the water.  As the watercraft have increased their activities, the float planes have dramatically reduced theirs.  In the three months since the fishing season opened on the Clearwater, I've seen two planes land on the liquid landing strip running parallel to the proposed-to-be-closed Morimoto Drive.

Community groups with interests in the Snye were given a heads up by municipal staff about changes proposed including turning the historic waterway into a DMZ, or de-motorized zone. Citing an ecological imperative that is requiring the removal of motorized craft, officials have said that it is one of several remediation steps that are necessary to "fix" the Snye. In order to set the stage for massive development, vehicular access to Morimoto is also proposed to be taken away.

Some community groups and users are supportive.  Others are incensed and making their feelings known, not buying the rationale that is being dished out, or the alternatives being suggested at various locations along the Clearwater.  They are passionate about the role the Snye has played in the history of Fort McMurray and in their lives, and they are fully engaged in holding our proverbial toes to the fire on this one.

Albert Einstein defined insanity as doing the same thing over and over again and expecting different results. We need to do something or the Snye will die.  It is already a hazard with the proliferation of weeds, brought on by a long hot summer and stagnant water.  Fuel residue from motorized users along with tonnes of storm sewer detritus don't help the situation, though they represent only a portion of the problem. The confluence requires yearly dredging as sand builds up making it very difficult to safely get through to the Clearwater late in the summer.

If the changes go forward, then my access to my "happy place" changes dramatically.  I will likely have to park somewhere close and walk over, assuming the finished product will be angler-friendly.  Others will have to find a different place to launch their boat or race their PWCs.  Lots of us have skin in the game, so to speak.  I understand why people are so activated on this issue.

At some point, the full proposal will make its way into the public realm where citizens can share their perspectives, municipal council can listen to all the facts, debate the issue, and make the best decision possible based on the facts presented.  Between now and then, my hope is that many respectful conversations take place, perspectives are heard, and all sides of this issue are explored.  We want to get this right, once and for all.
Email Post